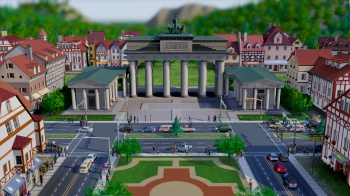 So much has been made of the problematic launch SimCity has enjoyed over the last two weeks. “This is what you get when you make us all connect online.” “It’s always-on DRM disguised as a multiplayer!” “EA is evil incarnate!” Features were turned off, and server admins and programmers worked like crazy people – I imagine there was some 5 Hour Energy involved – to add more shards and get the SimCity that people paid good money for up to a playable state. It is playable now, for the most part, but I don’t want to talk about broken servers anymore. I honestly don’t care about the always-connected restriction at all. If multiplayer is what Maxis wanted to focus on, that’s fine with me. I also don’t want to pass judgment with an official review until SimCity plays exactly how Maxis envisioned, but I feel like I need to get something off my chest:

SimCity is a terribly designed game.

It doesn’t feel like it simulates anything resembling a logical human settlement, and the end game revolves around bankrupting your city in order to trade commodities on the world market. What series was EA rebooting? SimCity or Business Tycoon? I imagine the small size of the city plots Maxis provides in its regions was meant for players to experiment often with new and different kinds of cities. A noble idea, but restricting me doesn’t really encourage me to start a new city I’ll just have to abandon in five hours. How is that fun? All of SimCity‘s systems impact each other and based on more than 50 hours of actual play time, they drag each other down into a miasma of frustration. It is city simulation for masochists.

Let’s look at the traffic problem more specifically. Say your streets get crowded and you decide to place a bus depot to provide municipal public transport and lessen some of the flow of individual cars. You put down some bus stops in what you believe are strategically desirable locations. Fine. When a bus is traveling on your city’s streets, the AI decides where the most passengers are to pick up and it goes there. Again, fine, makes sense. When you add more buses to mix though, the code can’t handle it and all the buses end up clogging one particular street trying to pick up those poor Sims. Seriously, I’ve seen 10 buses all lined up, blocking the street and preventing any other traffic from flowing by. You know, like fire trucks on their way to save some burning baby Sims.

It gets worse if a neighbor in your region has an upgraded bus terminal – these buildings conveniently send big buses out into the region to pick up your poor unwashed Sims and supposedly bring them around the region. Again, sounds like a grand idea. The end result, however, is you now have 20 buses packing the street instead of just 10, preventing Sims from getting anywhere. The only way to unstick these monstrous bus caterpillars is to destroy the bus stop. As far as I can tell, adding bus depots and terminals increases traffic problems and does nothing to alleviate them.

Traffic is so important because this whole game is designed about trading stuff from your little hamlet to other towns in the region and the world as a whole. You need a way for goods to transfer, and people to shuttle back and forth to their jobs. The main conduit of travel is the highway which goes through every city plot, but most of these predesigned plots only have one access point to the highway. That means everything traveling by road must travel through one entrance, and traffic inevitably gets backed up for people coming in and out of the city you designed so meticulously. (What happens when one access point to a highway gets overused? You build a new exit, but that’s impossible in SimCity.)

Sure, your advisors tell you to build train stations and ferries, but even though thousands of passengers pass through those expensive and budget-draining buildings, it never seems to make a dent in your ground traffic. Wasting more of your precious real estate on putting down (I’m refusing to use SimCity‘s terminology of “plopping” as it just reminds me of feces) two or three ferry docks or train stations seems like overkill. And you’re extra lucky if a specific plot even has access both a rail and water connection – most don’t. 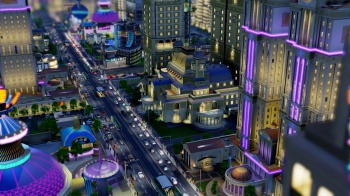 That’s just one system; I could go on about how police cars don’t seem to catch any criminals or how hospitals have tons of empty beds when people are dying all around it until I’m blue in the face and might need to go to an actual working hospital.

It all comes down to bad pathing code, which Maxis says they are fixing even now. I just wish the developers had noticed the problem during the, oh, I don’t know, year of beta tests leading up to launch. The traffic affects every single other system, breaking the game even more. If your streets are clogged, you can’t trade your precious commodities like oil, coal, or computers very easily. Of course, that begs the question of why you’re asked to trade these resources at all. Well …

The “endgame” of this SimCity is to specialize your little city into building or making something to trade on the world market. You can mine coal or ore, pump oil and make plastic, concentrate on trade or tourism, or go for high tech to make electronics. Exporting these goods makes a lot of money for your city that’s unaffected by taxes, city services or populations but you have to go “all-in” because the factories and support buildings for your chosen specialization are so expensive. In essence, the only way to make it work is to run your budget at a huge deficit and pay for your city on the profits. Setting aside for a moment that a city government doesn’t really earn money from a company in its borders selling oil – I suppose you could argue the funds represent tariffs or something – the city simulation game you thought you were playing shifts into a commodities trading game. And it’s a tough one too. To meet some of the goals to upgrade your specialization – 5 million daily profit? What? – You have to squeeze out every cent of profit you can and forget about everything else.

You may be different, but I don’t want to care about importing coal or whether I can build processors at a profit when I’m playing SimCity. I want to build a city that functions on its own. I want the simulation to react in predictable ways, and if it does something I don’t expect, I want there to be a reason why instead of the developers saying, “Ho hum, I guess that’s borked.” I want a water table that refreshes when it rains. I want said promised rain to actually fall. I want police stations and fire stations and hospitals to serve the community instead of doing nothing. I want subways.

There is a nugget of fun to be had with SimCity. Those first few minutes placing your first roads and homes, executing your plans, is about as enjoyable as gaming can get. But when you start to hammer at the systems, they all just break under the onslaught of logic. Add all this in with the server and connectivity issues, and it’s very hard to recommend SimCity to anyone.

Keep in mind: this is not an official review, but just my views on the game right now. Once the network issues are fully resolved, and features like the fast mode of play – stupidly called “cheetah mode.” What, fast, medium and slow was too complex? – and leaderboards are re-implemented, we’ll let you know The Escapist‘s official opinion. Perhaps I’ll even include some video of all the human bus caterpillars I was talking about earlier, just to be nice.

Until then, be wary of SimCity.