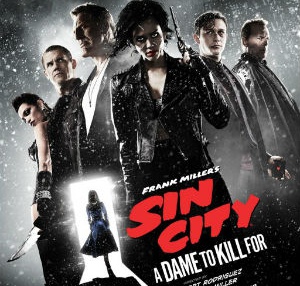 The A Dame To Kill For panel was a fun, bloated mess, just like the movie will probably be

The new footage shown at the beginning of the Sin City: A Dame To Kill For Comic-Con 2014 panel was striking, but it was ultimately the most interesting moment if a largely underwhelming discussion that as often as not felt like a breezy victory lap than a real examination. That’s understandable of course: Sin City 2 hits theaters in just under a month. Considering how co-director Robert Rodriguez left the Director’s Guild thanks to a dispute over giving credit to his collaborator Frank Miller, getting to make a sequel must feel, well, like victory.

But lord if it isn’t a bit taxing, and funny, listening to a discussion largely focused on how highly a pair of creators regard their own work.

But first, let’s talk the new footage. As we previously reported, it was a five minute clip from the film’s adaptation of the Sin City short story “Just Another Saturday Night”. Faithful, mostly, to the original comic, it features Marv (Mickey Rourke) narrating over rapidly escalating violence that, in all honesty, becomes so exaggerated that it feels like camp. By the end of the clip, in which a highly stylized police chase is imposed over a slowly-rotating visage of Marv, in Sin City’s trademark black and white and gore aesthetic, it all feels like a noir story as conceived by Liberace.

This became even more apparent during a second video shown at the end the of the panel. A montage of new and previously seen footage set to zippy pop music from the film’s soundtrack, the stylized violence and dialogue felt almost baroque. Like pornography, it was all very stimulating but is it on aggregate going to get a little boring? Eh, probably not. But lord, this thing looks like a loud, bloated mess. Of course, that’s the point. Which is to say, I want to see more. 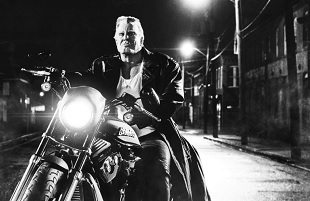 Meanwhile, Rodriguez and Miller spent the panel – which was moderated by Hero Complex maestro Geoff Boucher, and also featured appearances by Rosario Dawson, Josh Brolin and Jessica Alba – holding a mutual admiration society meeting, which was endearing and unintentionally funny. The discussion centered on what the cast and crew described as the realness of Sin City, the creation of a fictional city that feels real, like really real, for real. No really. Further, we were reminded again and again that Miller is a comics god*, and that Rodriguez was perhaps the only director who could have translated Miller’s work to the screen (at the time of course). Of course, Rodriguez also rather nonchalantly described the first Sin City as a film that gave us “a new way” to view the art of cinema, if that gives you an idea of the discussion’s tone.

To be fair, some interesting tidbits were revealed. Because Sin City 2 features some sections written exclusively for the film, the production can’t use Miller’s comic as a story board. As a result, Miller created storyboards himself, essentially original comics, on the fly, “sometimes ahead of time, sometimes right on set,” Rodriguez said. That is… insanely cool.

But overall, the panel was a wash. Great for fans, of course, which was the point, but like everything else out of the Sin City 2 production, it does little to make the film feel necessary. Hopefully when it’s released, I will turn out to be wrong.