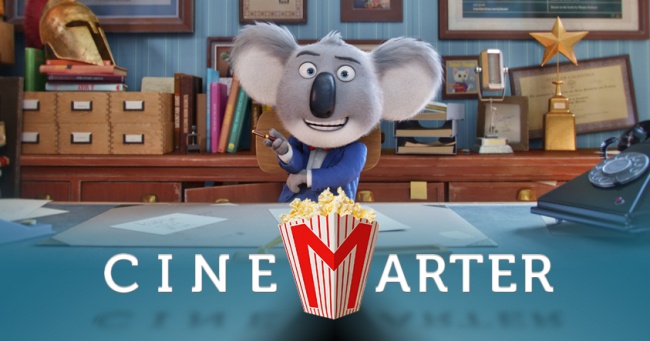 You ever notice how pretty much every act on American Idol – or whatever talent show you watch – that makes it very far into the competition has an interesting back story? The hope is that to draw in viewers, the people making the show will pick people who not only have talent, but also have a story in which audiences will become invested. “Hey, this real person has overcome so much and as a result she/he deserves to win,” they hope we think. That’s part of the reason why Sing doesn’t work all the way – the back stories that are created aren’t all that strong, and we’re aware that they’re not real and can’t become as invested.

The film follows a bunch of talking animals in a city that looks like a much less interesting/detailed Zootopia, and centers on a talent show hosted by a koala, Buster Moon (Matthew McConaughey). He has a theater that’s strapped for cash, and decides that this is the only way to drum up business – not realizing that talent shows have slowly been decreasing in popularity for the last half-decade or more. The prize money was supposed to be $1,000, but a typo leads to a flyer promising $100,000. From there, we meet our cast, watch rehearsals, get a glimpse into their lives, and see them put on a show. 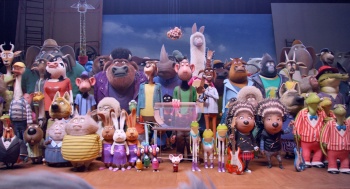 You can watch the trailer if you want to have a basic idea of who everyone is. Each character’s life is dictated by precisely one driving force, and it’s that very thing that will somehow be solved by this competition. There’s maybe one story that’s even remotely compelling, and it concerns the father-son relationship between a couple of gorillas. However, it’s an ensemble movie, so it’s not going to get the time required to explore it sufficiently.

Okay, so if the various characters’ stories aren’t the most compelling, at least we have the presumed talent to fall back on, right? Well, if you like watching (largely) mediocre covers of popular songs, then you’ve come to the right place. I don’t know whose idea it was to cast Reese Witherspoon in a lead role – maybe someone saw Walk the Line and figured “well, she was playing a mediocre singer there, but she can totally do better, right? – but she’s very much a weak link. Scarlett Johansson and Seth MacFarlane are much better, but they’re still not as good as the originals. Taron Egerton is probably the biggest surprise when it comes to the singing – who knew? – yet he falls into the same trappings. The only career singer in the cast is Tori Kelly, and she only gets one big number to do. The singing isn’t bad, but better versions exist and the film isn’t interested in doing anything new with the songs – just using them to hammer home character points and traits we’ve understood since the first trailer hit.

Sing is an okay animated movie that won’t engage adults on any level beyond the one that gets toes tapping.

So, if the various stories aren’t very compelling, and the music consists primarily of lesser covers of well-known songs, then what does Sing have going for it? Well, the song choices are still good, and while they’re not going to live up to the originals, that doesn’t make them bad. Most of them are catchy, and it’s not an unpleasant experience to listen to them. Sing also has some great animation – it’s the strongest animation that Illumination has ever done. The non-singing vocal performances don’t sound phoned-in, as they often can. And, um, beyond the initial studio logo, there isn’t any Minions garbage cluttering up the film. That will always be a plus.

Sing is an okay animated movie that won’t engage adults on any level beyond the one that gets toes tapping, but kids will probably love it because it has animals that talk and sing, which is the low bar that a film needs to clear in order to earn a child’s approval. The songs are lacking covers of popular songs – not bad, but karaoke versions – that were selected to be on-the-nose representations of characters’ feelings or personalities. The reason to care is missing for most of the animals – you know, the emotional hook upon which the real-world versions of these things rely? It’s got good animation and the songs still ultimately work, so call it a mixed bag. It’s watchable, but you won’t get much out of it if you aren’t under the age of 10.

Bottom Line: Sing lacks the two main ingredients of a successful talent competition – and is only a mediocre movie.

Recommendation: It’s pretty much just for kids, but you probably knew that.