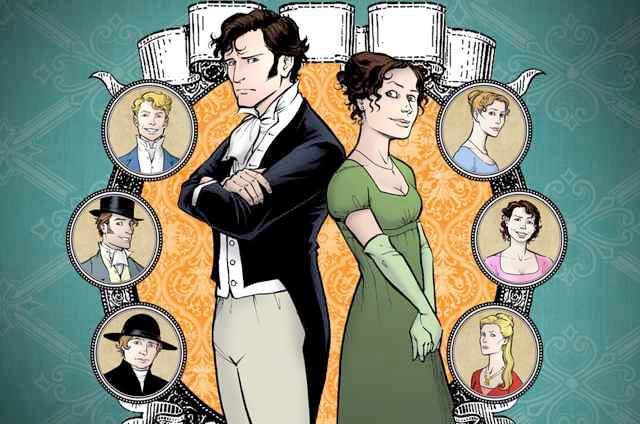 The Hallmark Channel is obsessed with the works of Jane Austen. No one is surprised. They released Marrying Mr. Darcy in June and for the holiday season have rolled out two more modern takes on Pride and Prejudice: Christmas at Pemberley Manor and Pride, Prejudice, and Mistletoe. It’s all typically comforting holiday fare, sure to be enjoyed while sitting under a slanket with a glass of eggnog, or in the background while doing party prep. But if you’re less interested in comfort and up for some competition, there’s a different way to enjoy Pride and Prejudice this Christmas.

Marrying Mr. Darcy is also the name of a card game that lets two to six players take on the role of Pride and Prejudice’s eligible bachelorettes competing to earn the best suitor. Each lady has a suitor priority list, earning the most points if they get their top pick and progressively less the more they have to settle. Meanwhile, each man has requirements to get him to propose, so Mr. Darcy is only interested in ridiculously witty ladies while Mr. Wickham really only cares about the size of his bride-to-be’s dowry. Each would-be bride also has different starting stats that tend to make them particularly well suited to their husband of choice, though some trade character points for special abilities. For instance Lydia Bennet only starts with a piddly one dowry, but her outgoing nature lets her steal a card from another player every time there’s a party. The guy playing as her in my game hammed it up, giggling about how excited he was to go out while eyeing everyone’s hands and picking his prey. That’s a powerfully Lifetime Original move.

Players increase their nuptial prospects by collecting character cards that increase their dowry or build up their wit, beauty, reputation or friendliness. While some cards are given to the players in their initial hand, most come through drawing from a central event deck. Some of these are pretty basic like reading a novel, allowing you to gain wit. Others are true events where everyone at the table has to do something. The previously referenced parties all come from this deck. All players roll dice in these soirees, with each outcome coming with a bit of referential flavor text. With the party card “Tea at Pemberley,” you could get nothing if you’re “too shy to join the conversation” or you could draw and play a character card for being a good hostess. Eat too much cake and you’re forced to discard a card; it’s savage Victorian fat-shaming right out of a Lifetime adaptation.

The character deck also includes cunning cards, which players can use to force other players to discard character cards if it looks like they’re getting too far ahead. That usually came with some particularly catty insult during our playtest, often referencing some other cards or plot point from the book like “If you keep flirting with the soldiers, my dear, people are going to talk!” If you’re trying to avoid making enemies, you can play the cunning cards face down to gain an edge at the end of the game when they’re used to determine who gets first pick of the available suitors. That’s really important since your stats won’t matter much if all the good guys are taken, and you’re doomed to be an old maid if none of the suitors willing to propose to you are still single.

The game is deeply referential to the book, with some cards having different effects for specific characters like Mary Bennet getting extra benefit from showing off her skills at the piano. Likewise the game makes sure relationships don’t get too weird, so Mr. Darcy’s younger sister Georgiana automatically discards anything that references his romantic affections. You can still have fun playing if you don’t know much about Austen’s work, but being familiar with all the characters and events being referenced definitely makes the game more interesting.

For all it’s great flavor, Marrying Mr. Darcy is a bit too luck based. Too much rides on what cards you draw and the game’s various die rolls. Even with good planning when it comes to what to play and who to attack, you can be wrecked by a card that devastates your stats or even forces you to pick a certain suitor. The number of event cards used is based on how many players you have, with 5 or 6 using the full deck. I think it would be better if the deck was always incomplete to keep repeat players from planning too much around what’s to come.

The game designers answer to that has been to release a pair of expansions: Emma, which brings in that novel’s characters and events, and the Undead Expansion for fans of Pride and Prejudice and Zombies. I haven’t had the chance to try those yet, but I’m betting they’ll still be more up my alley than a Hallmark movie.