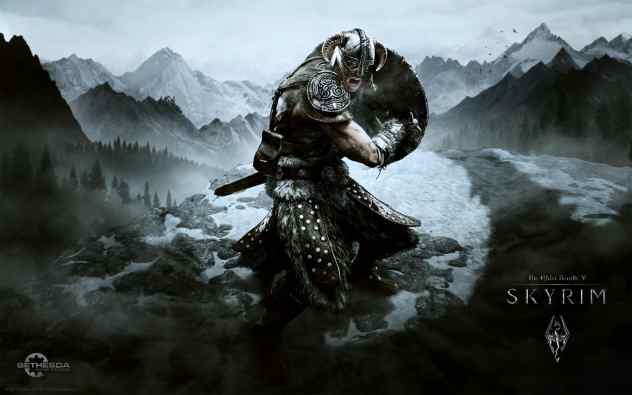 If at first you don’t succeed, stick a wicker basket on someone’s head. That’s not a sound life philosophy, particularly if you work in child care, but in the realm of The Elder Scrolls V: Skyrim deft bucket use definitely pays off. It’s also a magnificent testament to the value of thinking outside the box.

If you’ve never had the joy of participating in this open-world RPG’s bucket-assisted robbery (and it is a joy), I’ll explain. Skyrim’s physics engine is wonderfully absurd, especially when it comes to handling the game’s many, many decorative items. Nudge a bottle with your feet and it’ll roll halfway across the room; leap onto a dining table and the cutlery flies off with enough velocity to decapitate a Cliff Racer, though nearby NPCs do little more than grumble.

The icing on the cake, the mechanic that lets you steal scot-free from shopkeepers, is that you can pick up any small-to-medium-sized object and manipulate it at will. So, when you step into Belethor’s General Goods and feel his steely gaze upon you, you can grab a basket or bucket, place it over his head, and start grabbing anything that isn’t nailed down. It might take a few goes to get the bucket on but you’ll get there; even your failures will have you laughing like a drain.

If you haven’t filled your pockets by the time the basket falls off, you can repeat the whole process again. You’ve got a grin a mile wide, his stock is plummeting by the second, and all the while Skyrim’s own Del Boy is mumbling about buying your relatives off you. It’s a beautiful, beautiful thing that can be pulled off with virtually any shopkeeper or, indeed, any NPC, and it’s impossible not to feel smug when you walk out with your haul. 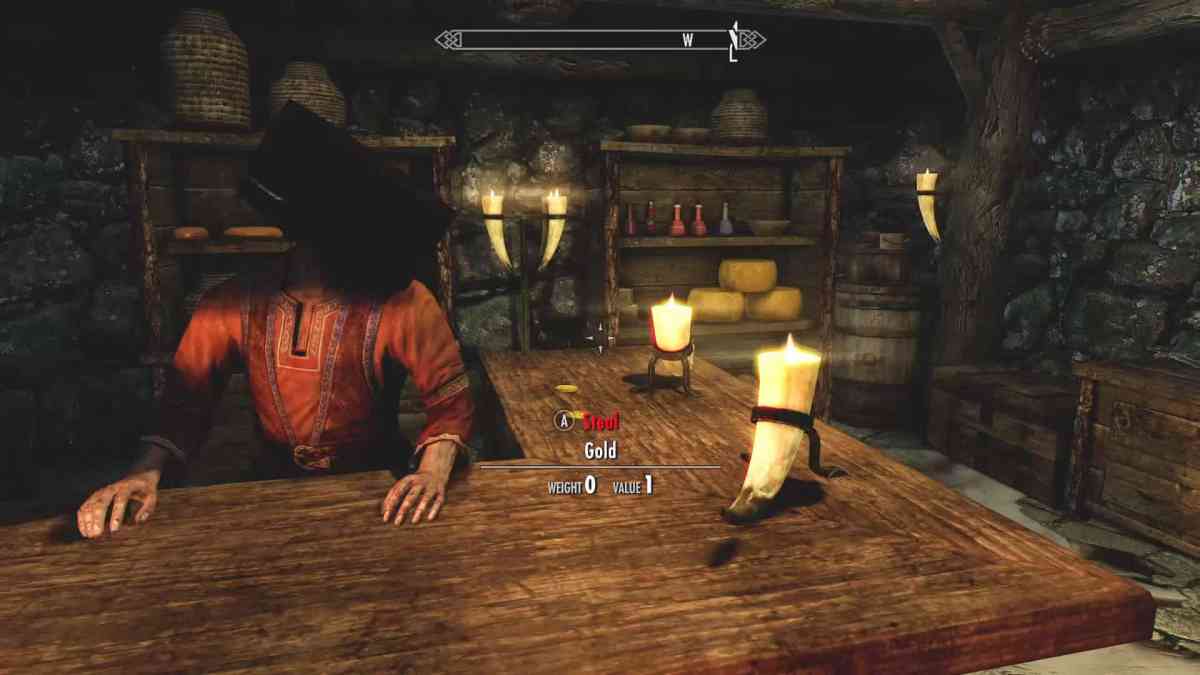 Is this cheating? Hardly – you could, at best, call it an exploit. In fact, if anything, the shops are the ones cheating you. You might be able to buy an Enchanted Orcish Sword of Trouser Browning from a shopkeeper, but you’ll never find that same sword anywhere amongst their wares. Instead, it’s hidden so you don’t grab a weapon way beyond your level; they’re making it hard to be an honest thief.

But what really makes bucket theft so satisfying is that you’re working wholly within the confines of the game. This isn’t some speedrunning glitch where you clip through the scenery or use a bug to hurl yourself halfway across the map. Not in a million years would I have dreamed of trying this, but someone, somewhere dabbled in the absurd and their discovery spread like wildfire.

There is no easy way to “fix” this either, since nothing’s technically broken. Sure, you could have NPCs register being touched by a background object as an attack, but you’d be knee-deep in guards every other time you knocked something over. What about letting NPCs see through objects? The whole reason bucket-assisted theft works is because the object blocks their line of sight. You could alter that, but that’d mean stealth fans would be unable to duck behind barrels; both options would make Skyrim far less fun.

That said, there have been times when players have gone in unexpected directions and the designers have stepped in to “fix” something. Take co-op humans vs. zombies shooter Left 4 Dead, for example. The penultimate level of Left 4 Dead’s first campaign, “No Mercy,” took place in part of a hospital that was still under construction and featured a generator that was so heavy that human players couldn’t shift it and monster attacks would only budge it half an inch.

Except, one day, someone on the monsters’ team wondered: “How far could I get it to move if I keep hitting it and doing nothing else?” Four or five minutes of dedicated slashing later, they’d managed to push it over to the elevator, just in time for the human players to find the doors blocked. All the opposing team could do was flail ineffectually at the generator before exiting the game, seething with rage. 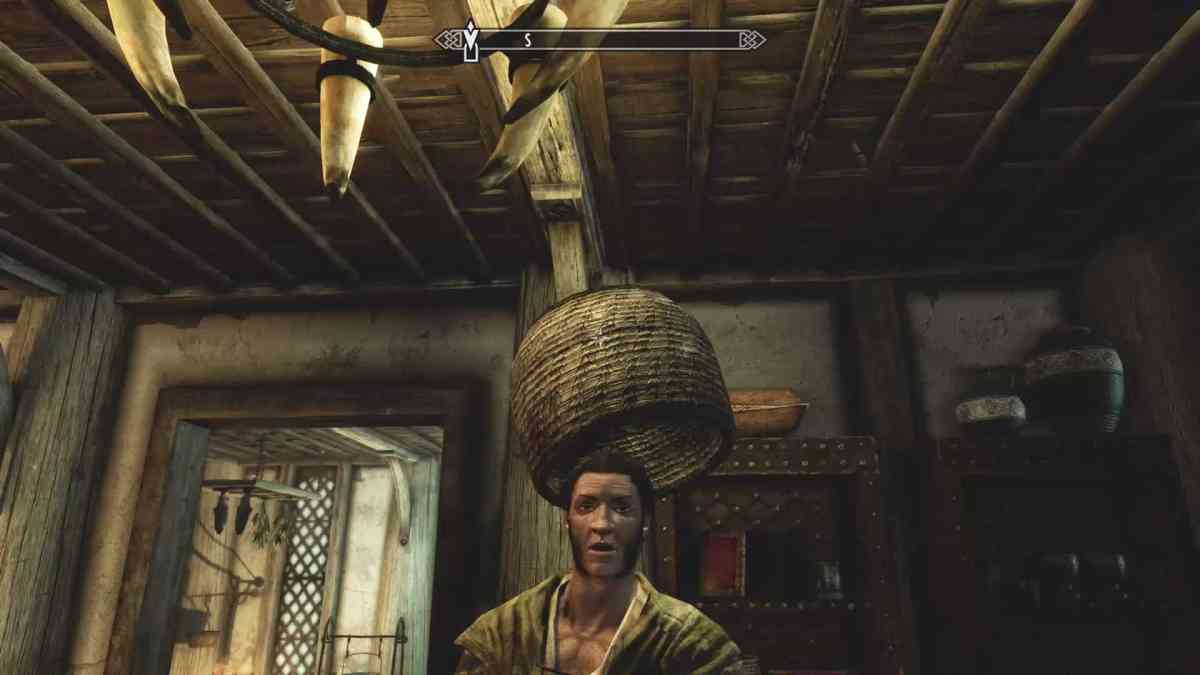 It was likely this rage that led Turtle Rock Studios to issue a “fix,” making the generator immobile. But like Skyrim, the game wasn’t conventionally broken; the issue stemmed from players being gloriously, unexpectedly creative.

Maybe there’s a lesson here, that AAA developers and testers need to think out of the box too. But given the industry has normalized huge 0 day patches and is trying to do the same with crunch, I’d say they’ve got bigger things to worry about.

In Skyrim, there aren’t queues of aggrieved vendors lining up to protest your unorthodox bucket use, and given Bethesda happily let giants hurl you into the stratosphere, I’m not convinced they’d have taken it out if they had been able to. So, all these re-releases later, Skyrim’s shoplifting shenanigans still stand.

The truth is I couldn’t be happier. I’m faintly jealous that I wasn’t the one who uncovered this phenomenon, but it’s heartening to know that such creatively off-kilter minds exist. While everyone else was shouting skeletons off a cliff, another followed their own ludicrous path and it paid dividends.

I’ve derived hour after hour of entertainment from their discovery, and, if (or when) you feel the crushing weight of life upon you, you can take solace in the knowledge that, in some corner of the gaming multiverse, bucket-headed Belethor is literally being robbed blind. Let’s see you top that, Avowed.