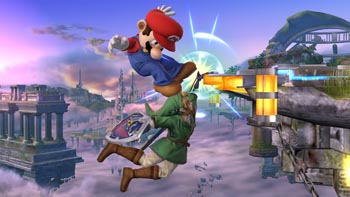 Nintendo has given a handful of Platinum-level Club Nintendo members early access to the eagerly-awaited game’s demo, with everyone else getting their mitts on it Sept. 19.

Anticipation is mounting for both the 3DS and Wii U installments of Nintendo’s Super Smash Bros. series, and Nintendo has given a select number of fans a taste of the upcoming 3DS version today. Polygon reports that, during Nintendo’s eight-hour Treehouse livestream today, a few Platinum-level members of the Club Nintendo program were emailed four 3DS download codes for the upcoming demo of Super Smash Bros.. The demo, which launches to the North American public via Nintendo’s eShop on Sept. 19, will feature the classic Battlefield stage and the characters Mario, Link, Pikachu, Villager and Mega Man.

To be eligible for the early access code, Club Nintendo members had to achieve Platinum status between July 1, 2013, and and June 30, 2014. In addition, they had to register their 3DS software or hardware with Nintendo and opted to receive emails from Club Nintendo.

If you know somebody with early access to the demo, you can play along with them on your own 3DS through local wireless. While the version of the demo given out to Club Nintendo members can be played an unlimited number of times, the one that will be made public on the eShop can only be opened a maximum of 30 times. Some retail locations will also have copies of the demo a day early, on Sept. 18.

If you’re curious about what characters you can play as in the upcoming game, you can check out our article on a fan unlocking the brawlers on his early copy. Super Smash Bros. for the 3DS will be released in North America and Europe on Oct. 3, with the Wii U version to follow in the fourth quarter of 2014.

Tampons Are Weapon of Choice in Student-Made Tampon Run