My favorite videogame villain of all time has to be Admiral Thrawn, from Star Wars: TIE Fighter. It certainly helps that by the time I encountered him on-screen, I was already well-familiar with the character thanks to Timothy Zahn’s critically acclaimed, best-selling series of expanded universe novels, but by-and-large, he was just a badass. Also, as opposed to in most videogames, he was my boss.

As I discussed in my my Editor’s Note to this week’s issue of The Escapist Magazine, I like villains. I respect them. I admire their “don’t fuck with me” attitude and willingness to make the hard choices. So when given the chance to actually be the bad guy in TIE Fighter, one of the baddest of the baddest bad guys ever, I literally jumped at the chance.

As I’ve chronicled in these pages at least once, I once bought a computer specifically to play TIE Fighter. In it, you play as a young starfighter pilot helping the Empire maintain order in a battle-torn galaxy. It’s just after the events depicted in The Empire Strikes Back, and the titular Empire has overstretched itself a bit, chasing after the terrorists who have – in a daring suicide raid – destroyed the symbol of the Empire’s power.

In retaliation, the Imperial Fleet has launched an all-out assault on the rebel insurgents, who have fled to a far-flung, remote territory, following a cleric of a mystical and long-forgotten religion who is assembling an alliance of guerilla fighters from across the galaxy.

In committing its forces to teaching these dead-enders what happens when idealism is pitted against superior firepower, the Empire has left itself open to pirates, smugglers and other opportunists who are attempting to take advantage of a distracted Galactic police force. Ruling an empire isn’t easy, after all. Get preoccupied quashing an upstart rebellion intent on destroying your way of life and before you know it, every fighter jockey with an attitude is knocking on your door, looking for a handout. Luckily your side has the best defense contracts – and Admiral Thrawn.

What made TIE Fighter so unique was that, as opposed to other videogames, it put you in the driver’s seat of the enemy forces. As such, you started out in what would typically have been the seat of unimaginable power. Most games put you at a disadvantage on purpose, so that you can raise yourself up to the level of badass, then exact revenge. You’ll play as a misunderstood badguy who’s really good, or a lone freedom fighter up against the forces of evil. You’ll be on your own, have to build your resources, marshal your forces and then deal a killing blow to the baddies.

TIE Fighter dispenses with that pretense and starts you as a badass at level one. You’re not struggling to make ends meet as you scrape together a working plan from found parts, like some protagonistic MacGyver. In TIE Fighter, you’re The Man, and your sole purpose in life is to beat down anyone who is not with you. Altruism is for suckers without Star Destroyers. You’re a part of a well-trained, smoothly-functioning war machine, and your mission is to simply follow orders. 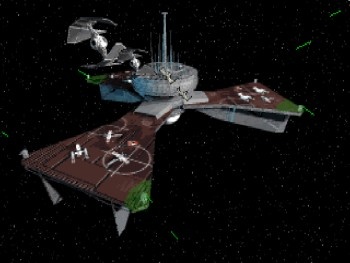 Enter: Admiral Thrawn. Thrawn is the gentleman’s bad guy. He’s a lover of art and history. He’s an underdog, being the first non-human to attain the highest rank in the Imperial Fleet. And he’s a decent guy. He doesn’t rule through fear and intimidation, he rules through competence and vision. Yeah, so what if he’s the supreme leader of the evil empire’s war machine. He gets shit done. He’s a boss you can respect and a bad guy you can love. If TIE Fighter were any ordinary game, you’d experience a poignant narrative moment in which you had to reconcile your respect for the man with your mission to destroy him. Luckily, TIE Fighter is no ordinary game, so you can set aside the moral ambiguity and just have fun wielding the bigger stick.

Well into TIE Fighter, Admiral Thrawn discovers that a fellow admiral, Zaarin, is staging a coup against the Emperor. Zaarin has the numbers and has timed his strike perfectly. All that stands between order and chaos is a thin, black line with you at the tip of the spear. Your job: protect the Emperor at all costs.

That’s right, sports fans, the later missions of TIE Fighter will task you with defending the greatest enemy the galaxy has even known, in the service of one of the second greatest enemies, against yet a third greatest enemy who, although he is currently your enemy, is doing the work of the good guys. If it sounds convoluted, just repeat after me: “I’m just following orders.”

Once you’ve bought in to the premise that the bad guys are the good guys (and it’s surprisingly easy to do), the rest is simply connecting the dots and blowing shit up. After it’s all over, while the thrill of adrenaline-flavored victory is still coursing through your veins, you may spare a moment to consider that your moment of personal triumph has helped plunge the inhabitants of a peace-loving galaxy further into the abyss of the Dark Side (the Dark side), but when the credits start rolling and they hand you your medal, none of that really matters. A man’s gotta eat, after all. And the Empire pays in coin.

TIE Fighter so effectively blurs the line between right and wrong, good and bad, that by the time it’s over you’ll find yourself wondering why you were on the Rebels’ side to begin with. And then you’ll probably wonder whose side you’re on now, in real life, and if they’re the good guys or the bad.

As Ben Kenobi says, in the original Star Wars film, “Many of the truths we cling to depend greatly on our own point of view.” If a videogame can cause you to think just once about whether the Emperor’s Admiral might not actually be the good guy, then, the next logical question to ask is “from whose point of view am I the bad guy?”

You may realize that, as a citizen of the Western world, you’ve been privileged with the luxury of spending the equivalent of a full working week entertaining yourself with a digital illusion, on a machine that costs as much as it would take to feed a third-world family of four for a year, and that, once that machine becomes “obsolete,” and you discard it, its innards will be poisoning the planet long after you’re dead. If so, your own faith in who’s right and who’s wrong may begin to quiver and you may consider that possibility that your place in the universe is not as you assumed it to be.

This feeling may pass, and I hope it does. Right, wrong, good or bad, we are what we are and this is the world we inhabit. Agonizing over the moral implications of the Western way of life is, at the end of the day, only so much wankery unless you’re willing to chuck it all and hand out malaria meds in the Congo. But if TIE Fighter causes you to consider all of this even for a moment, as it has for me, then it will have officially broken the barrier between entertainment and art, which is what we have all been claiming to be looking for all this time.

Admiral Thrawn is my favorite villain, therefore, not simply because of his badass attributes (which are legion), but because he broke my brain in two, caused me to feel good about being a bad guy, then bad about being a good guy. Like countless charismatic leaders before him, he manipulated my way of thinking until all I could believe in was him, and at that point, I’d have followed him anywhere. Even to the Dark Side.