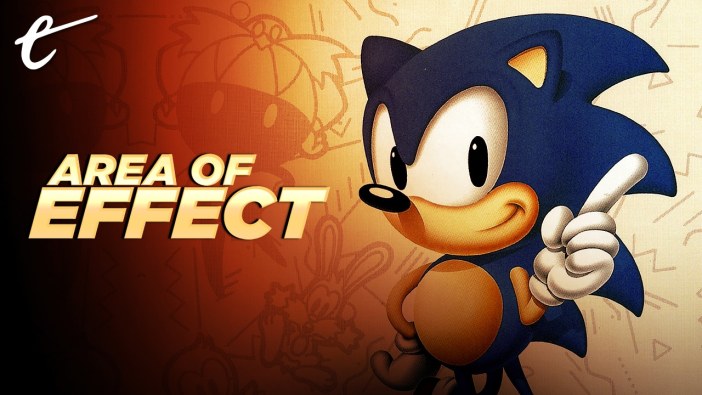 Sonic the Hedgehog wouldn’t have been half the game it was without its magnificent, game-changing loop-the-loops. There were other factors that contributed to its 16-bit success, including the fact half the world thought hedgehogs were exotic, but those gravity-defying loops played a huge part in cementing its place in gaming history.

I was around when the original Sonic Team’s Sonic the Hedgehog game came out, and even though I’d seen the loops crop up in screenshots, I still spent a good few minutes gawping when I first encountered them during play. Why? Because at the time, platform games had a formula, and while Nintendo’s Super Mario World honed that formula to the nth degree, it still felt a little familiar.

Yet here was an obstacle I’d never seen before. And that is what the loop-the-loops were in Sonic the Hedgehog: obstacles. This was before the series introduced the spin dash or the rollers that would give you a running start. So, after some consideration, I took a step back, built up some speed, and presto, I shot out of the other side of the loop.

Nice try, I thought. But I’m no idiot; I know exactly what this is. The moment I hit that loop, the game must be wresting control from me and depositing me at the other side. This is a glorified teleporter. There’s no way Sonic the Hedgehog is somehow working out whether I’m moving fast enough to do a loop-the-loop, right? 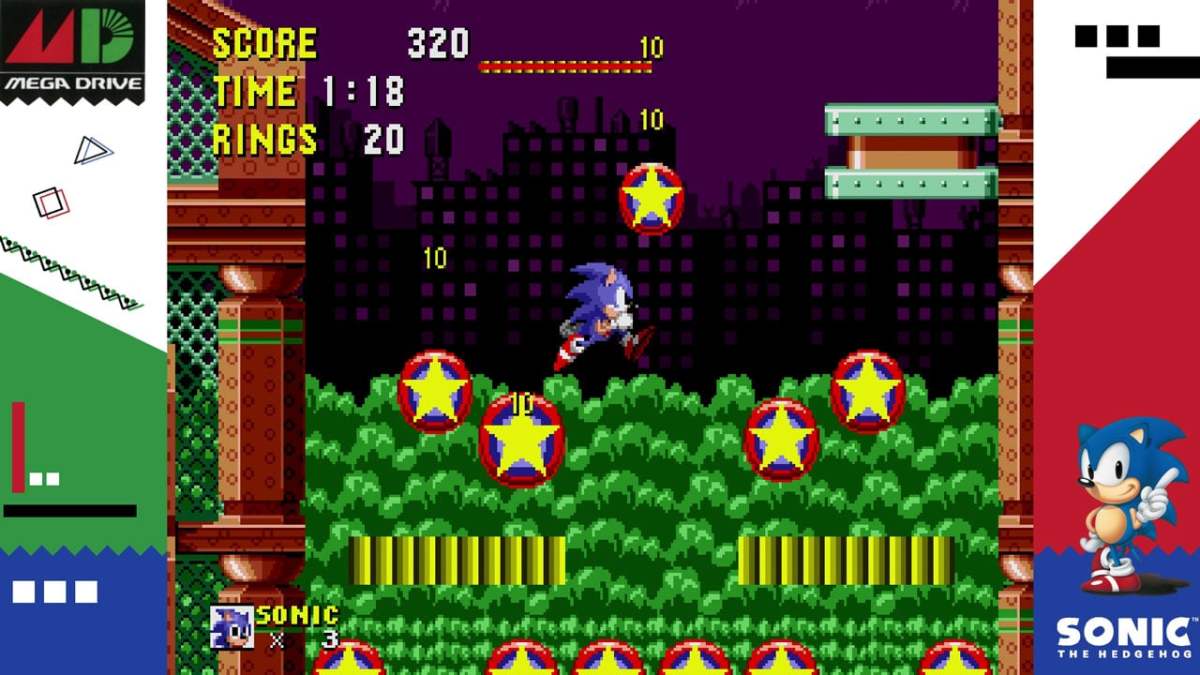 From the Sega Ages version of Sonic the Hedgehog

And so, the next time I hit a loop, I inched my way forward, waiting for the moment when I’d trigger the scripted sequence and be flung forward. However, what actually happened was that Sonic took a few steps up the loop and then slid back. I tried again and got the same result. It was amazing.

Yes, I was embarrassed to be wrong (my heartfelt apologies to Sonic Team), but I was also enthralled. I spent a good half hour trying to figure out just how fast I needed to be going to clear the loop. Could I go fast enough that I could make it halfway around the loop but fall off the top? The answer, as it turns out, was yes.

I don’t imagine that everyone spent 30 minutes testing the loop-the-loops in Sonic the Hedgehog, but it’s still a real eye-opener the first time you fail to clear one. And it’s no coincidence that they crop up in Sonic’s first level and are then set aside for a couple of zones.

Firstly, it sets the tone for the game as a whole, underlining that you really do have to go fast; it’s not just a gimmick. Like 2016’s Doom, albeit with less demon murder, Sonic the Hedgehog expects you to maintain a degree of momentum. Staying still isn’t fatal, but it does mean you’ll have a tougher time of things. 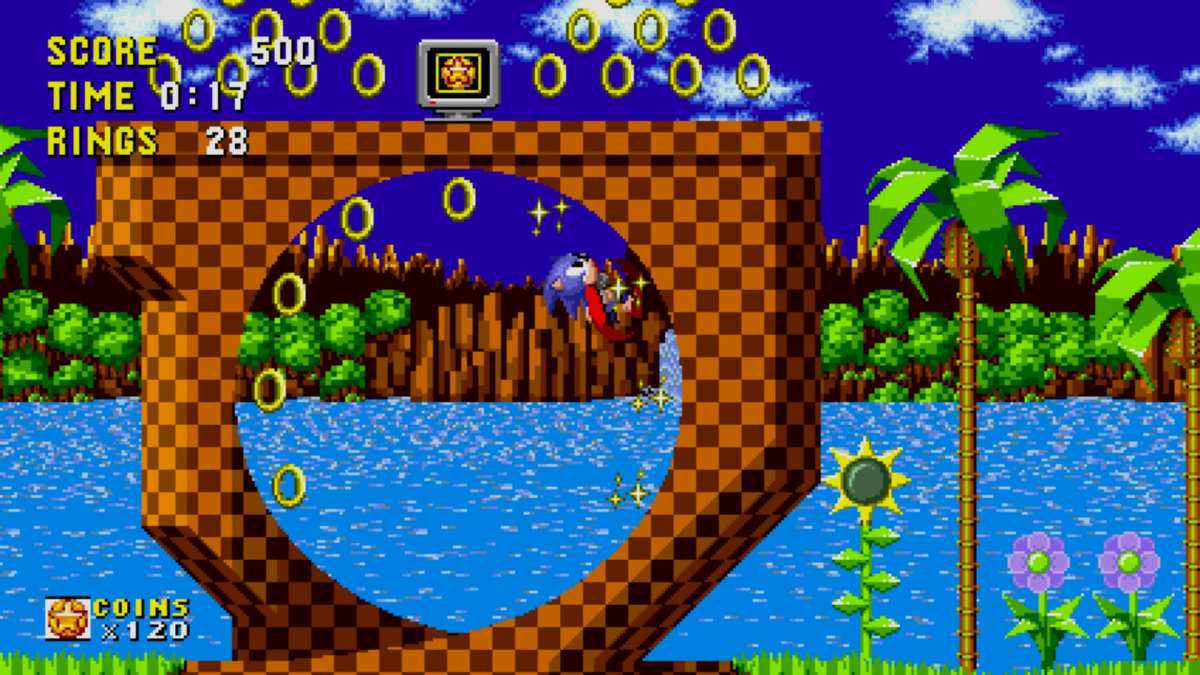 From the upcoming Sonic Origins

Secondly, it underlines that Sonic the Hedgehog has a physics system in place, one that’s more complex than in most platformers of the era. It gives controlling Sonic a consistent feel, one that has carried over to Sonic Mania. One of the complaints leveled at Sonic the Hedgehog 4: Episode I was that it didn’t feel right, a result of the physics being intentionally altered. Try tackling a loop in the latter and you’ll quickly notice how light Sonic feels compared to in other 2D Sonic titles.

But above all, what makes Sonic’s loops special is that you’re in control. When you’re speeding up a wall, around and then down again, that’s you. Yes, being a super-powered blue hedgehog definitely helps, but you’re the one who defied gravity, who pulled off the kind of ridiculous maneuver usually reserved for action movies, stunt shows, or Hot Wheels playsets. Sure, Mario might have a fireball-vomiting dinosaur, but you just mooned Isaac Newton. Take that, apple boy.

In fact, that could be what’s going through Sonic’s head as he roars round loop after loop. Sega has frequently painted him as a hedgehog with attitude, occasionally straying into absolute arsehole territory. His callous disregard for gravity (but not really) is entirely in fitting with his love of showing off.

The loops of Sonic the Hedgehog have gone on to become almost as iconic as the character himself. Not only do they crop up in Sonic Adventure, Sonic Mania, and the other variable-quality Sonic games, but they’ve made their way into Sonic merchandise. The recent Sonic the Hedgehog Lego set sported one (though it sadly dropped the Robotnik bot from the original fan submission). 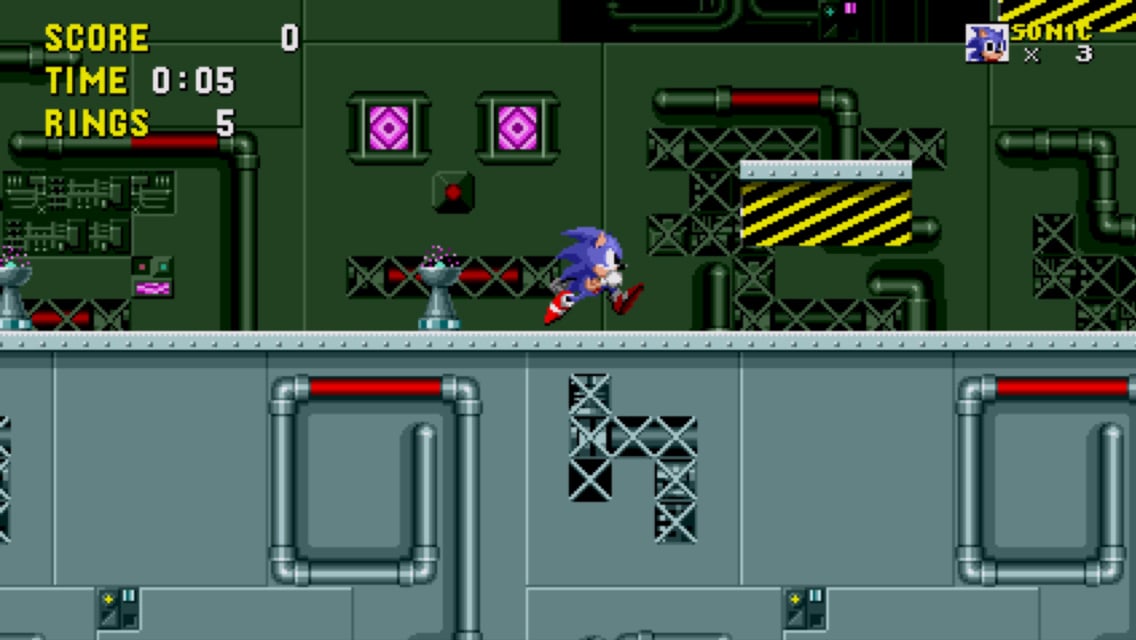 Granted, while remarkable for their time, Sonic the Hedgehog’s loops don’t have quite the same impact today. Partly it’s because platformers are more willing to shake things up, and looping-the-loop might seem a little mundane by comparison. Is this a bad thing? Not at all, though innovation isn’t a guarantee of success.

Also, later Sonic games have tended to overuse rollers and other devices, to the point where clearing a loop is sometimes too easy. They were never a massive challenge, but now it takes almost no effort. You don’t even have to run at a spring; just step onto the speed pad and you’re good to go. But with Sonic Origins arriving this June, gamers will be getting a second chance to appreciate what a great piece of game design the original’s loops were, as well as what a rush clearing them could be.

Could Sonic the Hedgehog have existed without its loops? Yes. But I doubt it would have had quite the same staying power, and instead of Jim Carrey’s glorious scenery-chewing turn as Doctor Robotnik in Sonic the Hedgehog (the movie), we’d be stuck with Al Pacino as Alex Kidd. Probably. Thank you, Sonic Team, thank you.