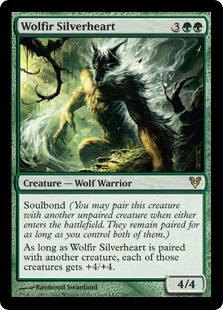 I’d like to take a break from the play-by-play reports from the last couple of weeks to foray into the Soulbond mechanic and my own take on one possible incarnation in the Block Constructed environment. The Soulbond mechanic has proven itself to be very powerful in Limited play, and I’d like to survey where we could potentially see it in a Constructed world. This deck feels a little slow for the format, so I wouldn’t necessarily expect it to be taking home any grand prizes, but it’s a good starting point for exploring the mechanic as a whole, and some meaningful interactions with other cards in the block. I was considering an aggressive Red/Green version, but I decided to go with Green/White instead, slowing down the game plan by a turn or two, but getting a bit more power out of the exchange. You can check out the deck list here.

Soulbond
In case you’re not familiar with Soulbond, the ability reads “You may pair this creature with another unpaired creature when either enters the battlefield. They remain paired for as long as you control both of them.” This means that if you have a creature in play when you cast a Soulbond creature, you can pair them up as long as neither is already paired. On the other hand, if you have two creatures in play that are paired together and you cast another Soulbond creature, you are not allowed to pair him with either of your creatures. They are paired permanently, at least until one of them leaves your control for whatever reason, and cannot be re-paired. This makes it particularly important to only pair creatures that you want to stay together, lest you end up with an underwhelming board position of paired creatures that don’t play well with each other. Now, as to the deck, in White I’ve only included the one, [mtg_card=Silverblade Paladin], who grants Doublestrike when paired. He can be cast as early as second turn off of [mtg_card=Avacyn’s Pilgrim] and, just looking at [mtg_card=Mirran Crusader], we know how strong a turn two 2/2 Doublestrike can be. Of course, it’s often the correct play to wait to pair him, but you have the option early for defense if need be. Next, in Green, is [mtg_card=Wolfir Silverheart] which grants a +4/+4 buff to each creature when it is paired. This guy plays well with almost everything in the deck, and can be powered out early with mana acceleration. He pairs up with [mtg_card=Champion of Lambholt] to make blocking virtually impossible for your opponent, barring them having their own six-powered creatures already in play. [mtg_card=Wolfir Silverheart] also teams up with [mtg_card=Pathbreaker Wurm] for 18 Trampling power, which helps against a field full of chump blockers. Finally, [mtg_card=Pathbreaker Wurm] teams up with [mtg_card=Silverblade Paladin] for a Doublestrike Trample effect, which can crush an unprepared opponent.

Utility
As far as utility goes, [mtg_card=Joint Assault] is just a combat trick with some extra oomph when cast on a paired creature. It can sneak some extra damage through, or just help you trade up during combat. It may be redundant with so much raw power on the creatures, but every little bit helps, and it jives particularly well with [mtg_card=Silverblade Paladin], providing an additional 4 Doublestrike power. [mtg_card=Righteous Blow] is strong against the first-turn plays of the format. It kills [mtg_card=Champion of the Parish], [mtg_card=Stromkirk Noble], and even a flipped [mtg_card=Delver of Secrets], all of which can get out of hand pretty quickly. It is fairly limited in what it can otherwise do, however, so I only included three in the main deck. We’ve also got [mtg_card=Garruk Relentless], which acts as removal for a small creature, or to provide a steady stream of blockers as needed. You can also use his tokens to pair up your unpaired Soulbond creatures to get the buffs if you’re having trouble drawing creatures. [mtg_card=Gavony Township] is cute here, but possibly unnecessary. I believe the mana base is sufficient enough to justify a two-of inclusion, however, and it can make even your mana creatures into legitimate threats while also pumping up [mtg_card=Champion of Lambholt]. Finally, [mtg_card=Ulvenwald Tracker] is going to be our higher-end removal. He’s reusable and when he’s working with an 8/8 [mtg_card=Wolfir Silverheart], virtually nothing in the format really stands a chance.

[mtg_card=Avacyn’s Pilgrim] and [mtg_card=Dawntreader Elk] help to push you into more powerful creatures faster. They’re essential here, I believe, because the format is so fast in general. With our threats starting at three mana, we just need a way to get them on the ground sooner. Four [mtg_card=Avacyn’s Pilgrim] and four [mtg_card=Dawntreader Elk] can get us to five mana as early as turn three, enabling both [mtg_card=Sigarda, Host of Herons] and [mtg_card=Wolfir Silverheart]. 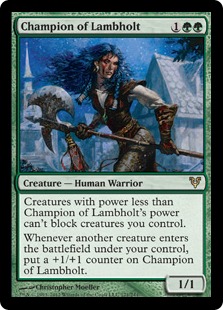 The Game
As to actually playing with the deck, we’re ideally going to lead with [mtg_card=Avacyn’s Pilgrim]. [mtg_card=Dawntreader Elk] is a runner-up, slowing things down by a turn, but usually blocking some damage before sacrificing itself. Against the more aggressive decks, leaving up a White mana for [mtg_card=Righteous Blow] is going to be pretty crucial, as you’ll usually only have one opportunity to take down a [mtg_card=Champion of the Parish] before he gets out of [mtg_card=Righteous Blow]’s range. Otherwise, from what I’ve seen, with so many little creatures running around, leading with [mtg_card=Champion of Lambholt] can be a solid start and guarantees you a shot at racing by making your team largely unblockable. [mtg_card=Sigarda, Host of Herons] holds down the air all by herself and her evasion makes her a solid win condition. If you’re not lucky enough to get an early [mtg_card=Champion of Lambholt] out for his evasion, you’ll want to get your [mtg_card=Pathbreaker Wurm] out to start getting in for Trample damage. With [mtg_card=Riders of Gavony] as a potential inclusion in some Humans decks, I think the diversity of our threat types is also important here, with only a handful of any given creature type in the deck. In the end, you’re usually going to need two threats in play to end the game, as is the nature of the Soulbond mechanic. This is a definite downside to the deck, but the inclusion of 17 threats should make it more palatable. 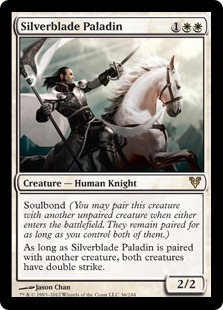 Sideboarding
If you’re running anything like this, a good sideboard is going to be integral to a winning strategy. My current sideboard hasn’t taken much Avacyn Restored into account, but based on the existing Block Constructed metagame from MTGO, I’ve got some ideas on how to make bad matches better. First and foremost, [mtg_card=Nearheath Pilgrim] grants Lifelink to his partner in crime. A couple of these should help the general aggro matchup, clearing out an early threat while gaining you some life. Even just a couple points of Lifelink damage can mean the difference in a close race. I’d probably side out [mtg_card=Dawntreader Elk]s for [mtg_card=Nearheath Pilgrim] here, since the acceleration is slow and they don’t work too well together. A fourth [mtg_card=Righteous Blow] can also come in here, likely for a [mtg_card=Pathbreaker Wurm], who is just a little slow against aggro. Red/White still seems to be pretty dominant in the format, and the only other major problem I foresee with that matchup is [mtg_card=Fiend Hunter]. Perhaps we can bring in another [mtg_card=Ulvenwald Tracker] to try to keep them from clearing out all of our threats. [mtg_card=Invisible Stalker] decks are going to be a race to zero in most cases, and they’ve probably got a slight edge pre-board. I think the Lifelink plan is good here, but we don’t usually get to block, so we can bring in [mtg_card=Naturalize] to keep them off their real clock, which involves either Enchantments like [mtg_card=Furor of the Bitten], or Artifacts like [mtg_card=Silver-Inlaid Dagger]. Our [mtg_card=Avacyn’s Pilgrim]s and [mtg_card=Champion of Lambholt]s are going to be pretty weak in this match, because of [mtg_card=Geistflame], so those can probably come out. Mono-Black Zombies have started putting up showings in MTGO, so they may become the real deal in the format as well. I think this matchup could use a couple of [mtg_card=Fiend Hunter]s to keep [mtg_card=Geralf’s Messenger] in check. Unfortunately, Zombies have a plethora of removal at their disposal, much of it at one mana in [mtg_card=Dead Weight] and [mtg_card=Tragic Slip], so our [mtg_card=Avacyn’s Pilgrim] and [mtg_card=Champion of Lambholt]s are pretty poor again here. The loss of [mtg_card=Champion of Lambholt] is okay, however, since many of their threats either can’t block or come into play tapped they’re rarely going to be on the defensive. [mtg_card=Sigarda, Host of Herons] makes for a decent ace-in-the-hole here, with only [mtg_card=Bloodgift Demon] causing any concern. Finally, the Blue/Green self-mill strategy featuring [mtg_card=Ghoultree] and [mtg_card=Splinterfright]. This is the only match where our creatures actually get outclassed, even an 8/8 Doublestrike can only trade with [mtg_card=Ghoultree]. That’s okay, though! Here we probably want the full playset of [mtg_card=Fiend Hunter]s, as well as an extra Plains to help ensure we can cast it when we need it. Trample is going to be largely futile here, so [mtg_card=Pathbreaker Wurm] can come out. [mtg_card=Righteous Blow] is going to be crucial for taking out surprise [mtg_card=Ambush Viper]s to protect our threats, so try to keep mana up to cast that if you don’t have Doublestrike active. [mtg_card=Dungeon Geists] are going to be a nuisance, and [mtg_card=Righteous Blow] falls a little short, so a pair of [mtg_card=Eaten by Spiders] can come in to allow our guys to untap.

Soulbond is a strong mechanic with plenty of fun and exciting interactions, but it may be a little slow and requires some extra commitment to the board to actually get your threats online. [mtg_card=Wolfir Silverheart] is likely going to be an all star in this deck, making your team unblockable with [mtg_card=Champion of Lambholt], getting huge Doublestrike damage capabilities with [mtg_card=Silverblade Paladin], or just going over the top with Trample courtesy of [mtg_card=Pathbreaker Wurm]. The deck is going to be heavily sideboard dependent in the format, looking for extra answers to individual threats from other decks. Soulbond may not be a staple in Block Constructed, but we’re likely to at least see some fun interactions with Soulbond creatures splashed into various existing archetypes. 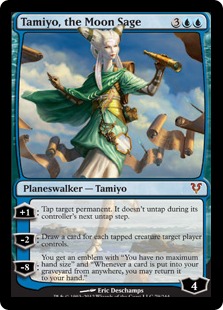 Q: [mtg_card=Tamiyo, the Moon Sage] has eight Loyalty counters on her. I remove eight loyalty counters to activate her third ability which reads “You get an emblem with “You have no maximum hand size” and “Whenever a card is put into your graveyard from anywhere, you may return it to your hand.”” Do I get Tamiyo back in my hand when she’s put into the graveyard for having zero Loyalty counters?

A: No, [mtg_card=Tamiyo, the Moon Sage]’s ability will be put on the stack when you activate it. Before it can resolve, however, a round of priority must be passed. Before any player receives priority, State Based Actions are checked, and Tamiyo will be put into its owner’s graveyard. Once this happens, and both players pass priority, her ability will resolve and, from that point forward, any card that is put into your graveyard may be returned to your hand.

704.5i If a planeswalker has loyalty 0, it’s put into its owner’s graveyard.