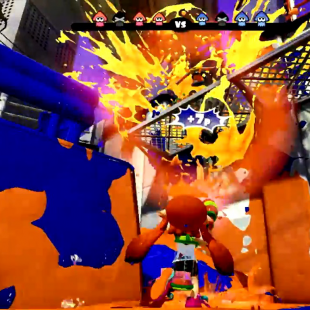 The producer for the project suggests that the newly announced mode could feature a lot more hiding and stalking than the 4v4 battle royales.

Splatoon made a big impression at E3 last week. An online shooter for the Wii U, revolving around splattering as much paint as possible across an arena? It was new ground for Nintendo, and one of several announcements that reinvigorated interest in their struggling console. It even scored one of our very officially un-official E3 Awards for “Best Premise for A Game Ever.”

Now, website Game Rant reports that Wii U owners can expect the new game within the first half of 2015, along with a one-on-one and single player mode. In a recent interview, Splatoon producer and manager Hisashi Nogami said the following:

“First of all, our plan is to release this as a full retail packaged software in 2015… the first half of 2015. And because we’re releasing this as a full software title, we of course plan to include a single-player mode but then also a one-on-one multiplayer mode that can be played without connecting to the Internet.”

While no other details were available on the single player mode, the one-on-one mode will feature local play, with one player on the Wii U GamePad and another using a Wii U Pro Controller. Nogami’s team is thinking about having that mode play very differently from the four-on-four battles showcased at E3, perhaps forcing the two players into more of a game of cat-and-mouse. In the interview, which also featured Splatoon project lead Tsubasa Sakaguchi, it was suggested the one-on-one battles could feature “a lot more stalking and hiding in the ink. It’ll be much more like a quiet mode in a sense.” Of course, none of these plans are final until the game actually ships.

Blood of the Werewolf Review – Bark at the Moon