The surprise with Splatterhouse, quality aside, is that it was even released in Australia, what with our notorious problem with a lack of an R18 certificate for games (meaning games that need them have been refused classification and essentially banned.) The gore could be written off as “fantasy horror,” but then there’s the tits, and if there’s one thing that terrifies the puritans at the ratings board more than violence, it’s a sexual thought entering their chaste, self-flagellating heads.

You see, there have been developments. With professional bugbear Michael Atkinson out of office (we threw a little party at the Mana Bar,) the R18 certificate issue has been under discussion again. The Australian government sent out a public poll that came back 80% in favor. Their own research revealed zero correlation between violent games and violent reality. The government officially recommended that the certificate be introduced. All that remained was for the Attorney Generals to give the okay and all would be lovely. Whereupon the Attorney Generals boldly and decisively declared that they were still undecided and needed to go off and think about it some more.

You might think this infuriates me, but in all honesty, I haven’t been personally affected by the censorship lately (and even when I was it just meant importing the games they ban, and that usually worked out cheaper.) Not a single game of interest has been refused classification since Rebellion’s Aliens Vs Predator. You may remember that that was the game that beat the system by threatening to simply not release the game at all, whereupon the decision was basically reversed. Perhaps this event completely undermined the power of the censorship board and they’ve been hiding in shame ever since. Perhaps enough of a collective stink has been raised about it all that they’re giving everything a pass for the sake of a quiet life.

If that’s the case, then I and gamers like me aren’t currently the ones who need to worry about the lack of an R18. It’s the parents. Games like Splatterhouse and AvP do deserve R18 certificates, because they’re adult as all fuck. If the ratings board is just going to give them all MA15+ in lieu of an adult certificate then they’ll be fair game for the nation’s 17-year-olds, who will no doubt immediately start experimenting with sex, knives and whiskey. Because, you know, currently they’re all sitting in treehouses drinking ginger ale and reading Tintin books.

I wanted to talk about gore. Time and again I’ve mentioned that violent games these days are a little too enamoured with “realism” and cover-based shooting and grittiness, and it’s been a while since a game has just been content to let you have fun with violence. Splatterhouse was obviously trying to do that, but somehow lacked the necessary punch. It occurred to me that Fruit Ninja on the Iphone is a more satisfyingly visceral game, just because of the greater care taken with the animation, physics and sound. The other problem with Splatterhouse was the terrible repetition, which implies that an important part of fun-violence is a little room for creativity. 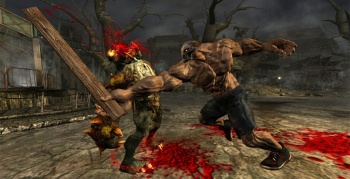 In my recent spare time I’ve been compiling design notes for a hypothetical game that would maximize the inherent appeal of excessive gore, just for the creative exercise of it. I’d like to share some of them with you now.

– Enemy models should be modular. Heads are one segment, each limb is divided into three, and each torso into, say, six. If sufficient force is applied, segments will detach. Enemies should have animations to compensate for the loss of one limb or part of the torso (with one hand fastened to the wound, maybe), but loss of two or more limbs is fatal. If one segment sustains sufficient damage in one go, it should explode into small squidgy bits.

– Blood particle effects should pour constantly from stumps. Blood should leave permanent splatter decals on any objects or terrain it touches, with disembodied gibs leaving the same stains on anything they bounce off. Blood sprays in games that don’t leave stains might as well be coming out of an aerosol can.

– The player should be able to exert control over physics objects, including body parts. Perhaps some kind of grappling hook weapon which can latch onto body parts and tear them off, returning them to the player so that they can then be thrown or used as bludgeoning weapons.

– Game artists must repress their tendency to over-design. Enemies should have smooth, clean textures without too much detail, in washed-out, neutral colours to set off the vibrant red blood splatters and wound decals left behind by gunshots and knives. There is no satisfaction in ruining something that looks like someone already ruined it.

– Enemies should also appear moist and weighty rather than dry and bony. Bloated with muscle and fat, glistening with greasy sweat, like a big moist birthday cake that yields satisfyingly to the knife. Since human beings hate themselves (see previous column on zombies,) humanoid enemies are the most satisfying to kill, especially exaggerated ones that seem like ugly parodies of humanity (as with many of Painkiller’s enemies.)

– All gore physics should have exaggerated sound effects. Body part removal sounds like pulling a wellington boot out of thick mud. Blood should spatter audibly. Gibs hitting solid objects should make inherently funny squidgy noises. You know that silly putty you can get that makes farting noises when you press on it? Like a ball of that being thrown at a wall. Guns should be loud and punchy and sound like the end of the world, like the double-barrel shotgun from Doom 2.

– Give the player a power-up mode that can be activated after they have killed a certain number of enemies. Murder feels less shallow if it’s an investment, even if it’s just for more murder. A power-up should exist that makes enemies die from the mere act of touching the player, allowing them to scythe through crowds like the guy with the lawnmower at the end of that one Peter Jackson movie. Chainsaw motorbike?

– Relatedly, gameplay should emphasize swarms of enemies in large, open environments. Weapons need to have increasingly wide effects that damage multiple opponents. Particularly devastating weapons should employ slight delays between activation and firing, just for the thrill of anticipation.

That’s all I have so far. If you have changes or additions to suggest for this idealistic fun-violence code of conduct, why not mention them in the comments? And I would like to close by stating that I only wrote all this to explore the notion of taking the most primal level of entertainment to its logical zenith, and not because I’m completely psychotic. Or at least, that’s what the voices tell me.