I hope you’ll bear with me for a bit while I get something off my chest in a rather angry and irrational way, but if there’s one thing I can’t stand, it’s Portal fans. The game’s superb, but it’s like what happened to Monty Python and the Holy Grail – quoted and referenced until only bones remain, and you can’t even enjoy the original without thinking of desperate misfits endlessly referring to the false promise of cake through eager, crisp-spattered grins. Emptily quoting other people’s jokes in the hope that doing so will somehow make them grow a personality of their own, mindlessly co-opting humor and pop culture in a pathetic quest for acceptance. The cake thing wasn’t even the funniest part of the game, for fuck’s sake.

The same kinds of people are the ones who would (and indeed do) describe ‘Splosion Man as one of the greatest indie games ever, and by Christ are the developers aware of that. The achievement for getting all the secret cakes from all the levels is called ‘Not a Portal Reference.’ But it is, isn’t it. Give your self-effacing sheepish little admission if you like, but acknowledging you have a problem doesn’t remove it. It’s like a fat person eating an entire shelf of cream buns, and when you call them out on it, they reply “Oh, I know! I’m so fucking fat, aren’t I!” before moving onto the next baked treat.

There’s something unpleasantly cynical about ‘Splosion Man’s presentation. It’s ‘wacky’ in a very hollow, calculated fashion. The references to internet and pop culture memes extend beyond the cake and Portal business – I’m fairly certain the main character occasionally yells ‘GET TO DA CHOPPA,’ and one of the later bosses parrots the phrase ‘FOR SCIENCE,’ which are both the kinds of nerd-culture catch-phrases that become annoying within days and wincingly painful the moment you hear them outside of being superimposed onto a picture of a startled cat. And then people who never mentally grew past the age of 15 say things like “THIS IS THE AWESOMEST THING EVER. IT’S SOOO RANDOM.”

Yes, random is funny, isn’t it? Sometimes I set up a random number generator when I need a good laugh. Get this: First there was a three, and now there’s a nine. I’m like, whoa! That’s not the number that comes after three! My thighs are now thoroughly tenderized from all the slapping.

Look, even a non sequitur requires context, otherwise you’re just jerking off. Portal’s cake and companion cube moments work because they beautifully illustrate how the AI character is trying to manipulate you through an incredibly tentative grasp on how human emotions work. ‘Splosion Man gives us nothing to go on. You are an exploding man in a lab laid out in a way that makes no sense. Nothing wrong with spartan game stories, especially in a skill platformer, but why the cakes? “WHO CARES,” says the game. “IT’S FUNNY BECAUSE PORTAL DID IT. SO LAUGH, BITCH.”

Randomness and non-contextual pop culture references are the level of humor exhibited in films like Meet the Spartans. And even if you’re an idiot or a foreigner and you like that sort of thing, it still isn’t executed well. One of the big jokes is that dead scientists turn into steaks and cooked meat products, but they’re glaringly incongruous and the camera zooms out so far that most of the time they just look like meaningless brown blobs. There are too many levels with too few ideas and virtually no changes of scene to liven things up (why not let ‘Splosion Man out of the lab and into a civilian area? Fertile ground for gameplay experimentation and even more questionable ethics). 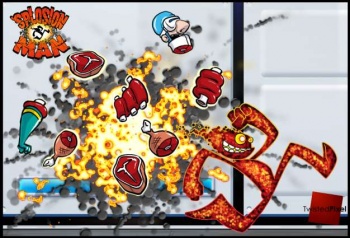 This isn’t so much a criticism of ‘Splosion Man as it is of people on the internet who buy into this sort of thing. I’m tempted to picture black-suited developers wringing their hands and humorlessly smirking at the thought of how easy ‘zaniness’ can gain an average game a cult following, their dead corporate minds failing to grasp the subtleties. More likely, it was the work of a committee of manchildren insisting on working in every idea that seemed so hilarious in the sugar-fueled brainstorming meetings.

In the end, ‘Splosion Man’s ‘humor’ is a child or an idiot acting up for attention. Mind you, that’s exactly what I’m giving it, so let’s all join the idiot conga line. Speaking of which, time for last week’s comments:

“Yahtzee, is there something your not telling us about Silent Hill 2 that reminds you of your personal life? Something that gave the game the extra mile with you?”
– Gunner-Guardian, from last week’s XP comments

No, I can’t say I’ve ever been a mentally disturbed guilt-ridden widower. Well, sure, I’ve murdered a few sluts in my time but I’ve never felt guilty about it.

That’s why I admire Silent Hill 2’s story so much. I don’t even believe in love. I believe that what people call ‘love’ is a combination of herding instinct, peer pressure, need for security and good old-fashioned lust. I hate all that over-idealized, moony-eyed devotion evident in most romantic movies because I’ve seen (and been in) the kind of shit that it always transmutes into over time. I think Orpheus was a clingy little bitch, and I’m suspicious of how people always seem to find their ‘one true love’ living within a few miles. Often more than one.

And yet, throughout SH2 I was totally on-board with James Sunderland’s quest for his (one suspects) over-idealized, lost love. See, if a protagonist is characterized well enough, it doesn’t matter if your philosophy doesn’t gel with theirs. That’s why left-wing liberals can still enjoy watching Batman, and why it feels a little cheap that Silent Hill: Shattered Memories is gonna have a quiz or something.

Actually, Tomm Hulett of Konami got in touch after the SH2 video to explain that the quiz will just be a small part of a complex psych profiling system, which will also record where you go first, how desperate you seem to be, whether you turn left or right, etc. And as I said in reply, I’ll be interested to see exactly how this information gets applied, because I’m thinking about it and I keep coming back to that bit in Metal Gear Solid where Psycho Mantis tells you how often you saved.