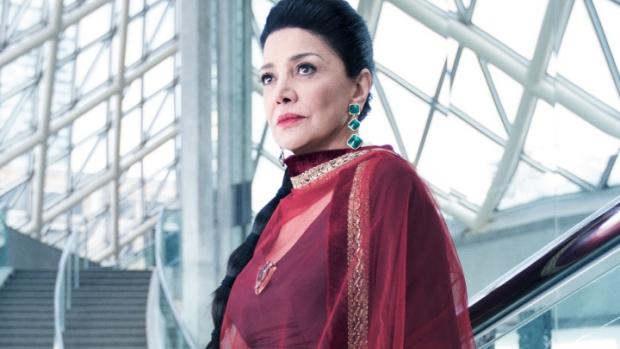 Star Trek Beyond adds Shohreh Aghdashloo to cast in time for reshoots.

Its relatively common place for movies to do extra shooting after the bulk of filming is done, but it is rare that a new high-profile cast member is added. Such is the case with Star Trek Beyond and the addition of The Expanse star Shohreh Aghdashloo.

Deadline is reporting that Aghdashloo, who won an Emmy in 2009 for House of Saddam and was nominated for an Oscar in House of Sand and Fog in 2003, will play the role of “the High Command of the Federation.” The cast is being reassembled for some reshoots, with Aghdashloo supposedly being in many of the shots.

Fans of the Mass Effect video games should know her voice, as she played the role of Admiral Shala’Raan vas Tonbay in ME2 and ME3. She also had a brief role in X-Men: Last Stand as Dr. Kavita Rao, who working on a mutant “cure” and met a rather pointed demise.

Star Trek Beyond, which is scheduled to be released on July 22, brings back Chris Pine as Captain Kirk, Zachary Quinto and Spock and Simon Pegg as Scotty, among others. Idris Elba is also joining the cast this time as the primary villain. The film is being directed by Fast and Furious 6 director Justin Lin.

Here’s hoping that Aghdashloo adds a bit of class to the film after the initial trailer tended to have fans questioning what was going on with the new film.