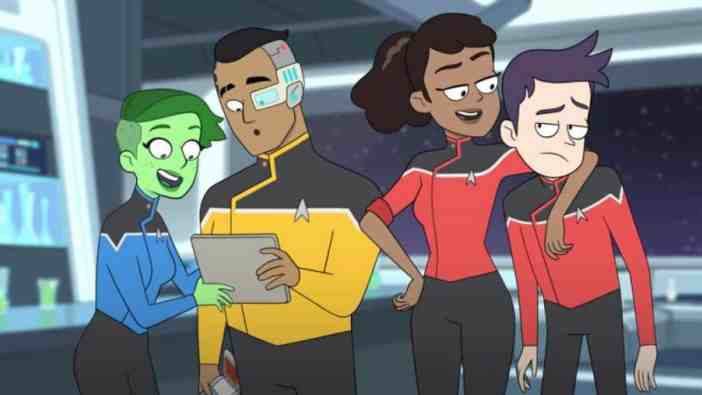 The history of Star Trek in animation is short and odd, but CBS All Access is looking to change that with its newest Trek offering, Star Trek: Lower Decks. The new animated series will focus on life on a starship away from the bridge and captains. You know, those folks tucked away in the background as Captain Picard has serious discussions with a new alien race. The official trailer is out now.

As is easy to tell, Star Trek: Lower Decks comes in on the lighter side of the Star Trek canon, being an adult-oriented comedy series. As is also easy to tell from the animation style, the series is being led by Rick and Morty‘s Mike McMahan. There’s plenty of humor in there that seems in line with that series, though the show isn’t supposed to be as R-rated. A lot of the humor in the trailer stems from Star Trek references and gags, but hopefully the series expands out from that as it goes on.

For those who care about things like canon, the series is set in 2380, which is a little bit after Star Trek: The Next Generation and a little before Star Trek: Picard. How much of that actually matters in terms of the greater universe or how much the show will connect to any other series is yet to be seen. Hell, people are still arguing over if Star Trek: The Animated Series should be canon.

Star Trek: Lower Decks stars Tawny Newsome, Jack Quaid, Noël Wells, and Eugene Cordero as the four leads ensigns Mariner, Boimler, Tendi, and Rutherford respectively. It will premiere on CBS All Access on Aug. 6, 2020. For those who don’t like comedy in their Trek, don’t forget that CBS All Access is also bringing us Star Trek: Brave New Worlds.