Between clever character developments and a chilling new villain, Star Wars: Rebels has finally gone from being good to being great.

Right from the start, Star Wars: Rebels was filled with potential but kept stumbling in the execution. The problem was mostly about pacing. Rebels kept trying to pack everything it could into a half-hour time slot, and while thats fun to watch, the cast never had time to breath. Each chapter lacked a focus that would allow it to develop new concepts or flesh out characters in any meaningful way.

“Rise of the Old Masters” isn’t just the first episode to fix this problem, it’s Rebels first genuinely great story. Building from a rescue mission at an Imperial prison, “Masters” perfectly balances the entire cast of characters while slowly building to the arrival of Rebels first truly chilling villain, the Inquisitor. Along the way, there’s also promising character developments for Ezra and Kanan, who have different perspectives on whether this Jedi training is working out. “Masters” also knows when to create tension, and when to diffuse the situation with humor, even making light of classic Star Wars tropes in the process.

Sure, viewers may be a little tired of yet another Jedi focused story, but you know what? This episode presents it so well that it’s hard to be upset. These are the kind of stories that make the new Star Wars continuity worth following, and if Rebels can keep it up, it will be a show fans love to watch each week instead of going through the motions.

But don’t take my word for it; you can watch the episode on Disney XD or iTunes.

The central focus of this episode is on Ezra and Kanan, who have finally started their Jedi training, although don’t have the luxury of a secluded planet to do so. Instead, they’ve taken to practicing on Ghost’s hull as it floats in the clouds, where Imperial spies can’t spot them. It’s a great visual sequence, pushing out a lot of Rebels‘ usual distractions to address Ezra’s flawed approach (except for distractions Kanan wants Ezra to experience). It’s also a great chance to poke fun at The Empire Strikes Back‘s training sequence, especially when Ezra calls out Yoda’s “Do Or Do Not” philosophy as bunk.

Like any “first day of school” episode, Ezra’s training session doesn’t turn out well. But what’s really clever is that Ezra isn’t overcome with doubt; Kanan is. Even as a Jedi, Kanan is fairly young and certainly hasn’t trained a student before (according to the new canon, he was a padawan when the Jedi Council fell). So when Ezra doesn’t succeed, Kanan blames himself for being inexperienced, and suggests they find a different Jedi to train him. But to an orphan like Ezra, that sounds like his new family is about to abandon him, pushing him to do more to prove his worth. It’s a thoughtful twist that complicates the episode quite effectively, with subtle character actions teasing the hidden meanings just below the surface. 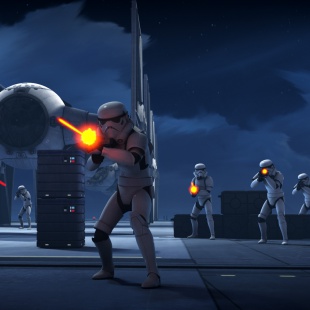 The Empire comes into the mix when the Ghost catches a message slipped into the Imperial propaganda machine: a prominent Clone Wars Jedi has been arrested and is awaiting trial… or more likely, a secret execution. Kanan proposes a rescue mission, partly because he hates the thought of losing another Jedi Master, but mostly because she might provide the structure Ezra needs. The bad news is she’s being kept in one of the most secure Imperial prisons in the galaxy, which is a less-than-ideal battleground even when the protagonists fully trust each other.

Even worse (for the Ghost crew, not the audience,) is that the Empire is fully prepared for an attack. That “message” the heroes received was little more than a ruse intended to root out hidden Jedi, orchestrated by Rebels first major villain, The Inquisitor. While the show doesn’t offer a lot of background information, he’s effectively introduced as a force that might beat the Rebels at their own game. It certainly doesn’t hurt that he’s the first glimpse of an Empire that’s clever and genuinely deadly, instead of bureaucratic and stupid. And while he certainly has an air of Sith gimmickry about him (like a dual-blade lightsaber that spins itself for no reason) the presentation is so good that it really doesn’t get in the way. I absolutely look forward to seeing more of him.

The most encouraging detail to me however, is that there’s so much to love here without feeling like the episode is packed full to bursting. The episode flows wonderfully from training sequences, to internalized self-doubt, to mission preparation, to flawed execution without heavily relying on exposition dumps. Even though secondary characters are moved to the background, they still have ample time to shine without derailing the episode’s tone. Rebels even squeezes a little “adult” humor in, somehow stating outright that alien creatures are attempting to mate with the ship without feeling jarring or out-of-place. That’s quite the achievement, and makes me excited to see what’s coming next.

Bottom Line: “Rise of the Old Masters” is the benchmark Rebels episodes should aspire to, validating the show’s entire existence up to this point. It balances a great premise, clever character development, a surprise twist, and the introduction of a deadly villain. While “Masters” has a few minor flaws, it’s so well-paced and presented that you’ll barely even notice them. Star Wars fans new and old should find much to enjoy here, and will be excited for what comes next.

Recommendation: This episode is worth starting a Star Wars TV series for. Check it out.