Developed and published by Chucklefish. Released on July 22, 2016. Available on PC. Review code provided by publisher.

It’s been a long journey for Starbound. Announced all the way back in 2012 as a “spiritual successor” to smash-hit “Minecraft-but-2D” builder Terraria, it excited fans of the collect-explore-build genre by promising us a Terraria-like experience crossed with the freedom to explore a procedurally generated galaxy. The game had a fairly rocky “early access” journey but after spending some time with the final build, but it looks like it has finally become the game we were promised all those years ago. 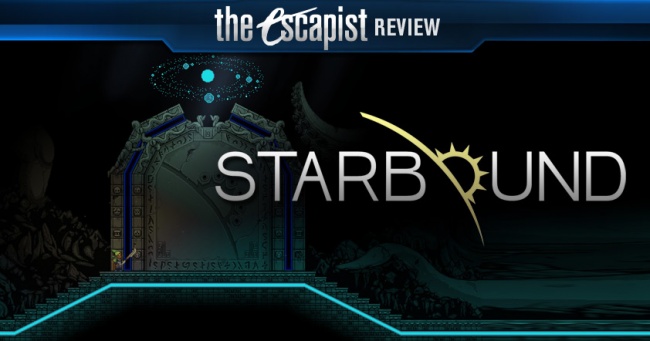 When the first Early Access build of Starbound hit in 2013, it was a mess. It was essentially a bare-bones build of the game, containing a few of the core systems, and not really anything else. Most notably, it was missing that sense of progression that Terraria nailed so well. The final retail build has come a long way, and addressed almost all of these issues.

If you played any of the Early Access builds of the game, the first thing you will notice is that the game now actually has a story. After a brief introductory quest, where you are christened as one of the ancient, noble “protectors”, and the Earth is destroyed, you’ll find yourself dumped on a random planet, in search of materials to fix your ship and aid you on your mission to bring peace and order to the galaxy (or something like that).

Eventually, the game will send you to a kind of “hub world” space station, where you’ll get a bunch of new quests. This is when the game really starts takes off. The hub world gives you a place to upgrade your items and abilities, purchase vehicles and supplies, and of course seek out new quests. Getting to this world and being shown some clear goals to work towards was what really gave me purpose in the game, and where I got completely hooked.

From here, the world, or rather the galaxy, is your oyster. You can simply pick a planet and explore, or you can try and complete quests and “missions”. Missions essentially give you a chance to test out all that snazzy gear you have acquired by dumping you into a pre-built, unalterable level that you must fight your way through, culminating in a boss fight. It’s a fun way to break up the cycle of dig-discover-build, and offers more of a traditional 2D side scroller experience as well as a sense of accomplishment.

Where Starbound completely trumps Terraria, and becomes worthy of the “spiritual successor” tag is in scope

Where Starbound completely trumps Terraria, and becomes worthy of the “spiritual successor” tag is in scope. Terraria limited you to a single planet, and while there was a bit of progression, with a dungeon, a “hard-mode” and multiple bosses, it’s nothing like what Starbound has. In Starbound, you can explore planets, build vehicles, upgrade your ship, make villages, the list goes on. There’s just so much more to do in this game, and so many more game systems to play with.

Just like Terraria, you can play Starbound alone or with friends. And, just like Terraria, or Minecraft before it, it’s more fun with friends. What good is building a fancy, thousand foot-high castle if you can’t show it off to anyone? The game does get a bit easier when you can team up with a buddy, but that’s okay. Visually, the game quite similar to the likes of Terraria and Stardew Valley‘s pixel-art. That’s not to say it isn’t absolutely gorgeous though, with all of the little animations bringing life to the universe’s inhabitants, and each planet being a beautiful, unique tapestry.

But perhaps the single most impressive thing about Starbound is, unexpectedly, its soundtrack. It’s calming and soothing when you’re exploring. It’s dark and unnerving when you are deep underground. It’s fast and upbeat when you are doing battle. Rarely do I hear a soundtrack match a game so perfectly – especially a game with such an open-world nature as Starbound. I could seriously listen to it for hours, and immediately looked for a way to purchase it after playing the game.

So far, so good, but Starbound is not without its faults. The game’s UI is pretty un-intuitive – menus are difficult to navigate, equipping and using items is frustrating, and hotkeys are more confusing than helpful. Additionally, despite the overarching main quest line, there isn’t enough in the way of a tutorial for new players – especially players who are completely new to the genre. It doesn’t explain the crafting system at all, and is very vague on how to complete quests. The “core fragment” quest for example simply tells you to find them “deep underground,” without explaining how to get there, and more importantly, how to upgrade your gear to make it a bit less of a slog. I was able to figure things out based on my experience with Minecraft and Terraria, but the first hours of the game will be a confusing mess for newbies, and may switch them off the game completely.

All that said, Starbound has come a tremendous way from its first Early Access release. Back then I would have had a hard time recommending the game to anyone besides the most hardcore of fans, but now I can happily recommend it to anyone with even a passing interest in the construction game genre that Minecraft kicked off.

Bottom Line: It’s a bit rough around the edges, and the first few hours are a slog, but Starbound is a deep and vast constructor with a killer soundtrack.

Recommendation: If you’re looking for a spiritual successor to Terraria, you have found it.