As I’ve frequently mentioned, I like stealth gameplay. I always think it’s a shame we have to be so laissez-faire about killing people all the time. We seem to be always so dismissive of how impactful the removal of a sentient lifeform from the world can be. I was watching someone play the new Sly Cooper game the other day, and as is fairly typical for the series it made sure to make things very clear that you’re only stealing from assholes or for self-defense reasons. And then, that over with, the game instructs us to start murdering every single guard we see. Don’t sweat it, it’s not like those guys matter, they’re all minimum wage.

I know they’re not real people and there’s a lot of catharsis in violence, but I’ve always thought it both healthier and altogether more satisfying to defeat someone while leaving them unharmed and in a position to feel like an absolute chump afterwards. I’ve heard people complain that stealth is basically just sitting and waiting for an opportunity in a totally non-proactive kind of way, but I disagree. In fact, when I put my mind to it, I realized that stealth is as multi-faceted a core gameplay mechanic as you could hope for.

I’ve even started putting together a concept for an all-stealth class-based RPG, in which rather than picking from the standard trio of fighter, rogue or mage, you pick between rogue, rogue or rogue. Except that they’re different kinds of rogues that all have a distinct style of stealth gameplay. You see, when I put my mind to it, I realized that stealth isn’t necessarily the art of not being seen; it’s the art of not being caught. The three classes I came up with are based around the three opportunities for doing so, namely: before being spotted, while being spotted, and after being spotted.

Best of all, none of these three styles of gameplay require killing. Or knocking guards out, which is functionally the same as killing but adds enough context to provide a degree of moral cop-out. There doesn’t even have to be violence if the guards spot you, since guards in a sensible world will throw you out or at worst have you arrested, not immediately reach for the sidearm because you stood next to a suspicious waste paper basket for too long. I’m talking dramatic action gameplay with no violence whatsoever. I tell you it can be done.

The first mode of stealth gameplay is the most obvious one, as seen in the seminal Thief series of stealth games, in which the player avoids being seen in the first place. This protagonist wears some kind of black ninja suit and camouflaging mask or face paint that will mark them out instantly as some kind of sinister intruder if seen, but which grants them the ability to become invisible in shadow. The sneak thief must be acutely aware of all their enemies’ movements, so that they only ever act when suspicious eyes are looking in other directions.

Consequently the sneak thief’s skill tree emphasises speed, distraction, and awareness of surroundings. Example skills include creating noises to make enemies look or move away from you, a Dishonored-style vision mode showing guards and their patrol routes through walls, and in later tiers, the ability to warp instantly from one shadow to another. 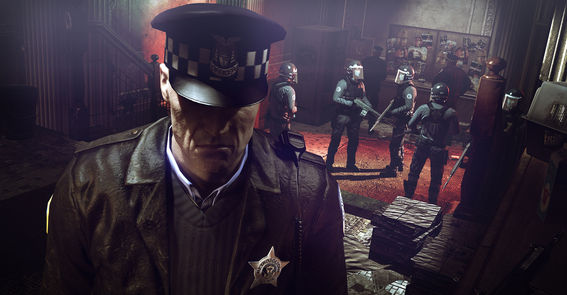 The second variety of stealth is best summarized with the phrase “hide in plain sight”. This is the sort of thing you see in games like Hitman and Assassin’s Creed; guards are pretty much constantly looking at you, but the trick is to blend into the scenery and look harmless. The spy is a master of disguise who possesses some kind of “blend” stat, which goes up if they are wearing the same clothes as everyone around them, hanging around groups, and are acting innocuously with absolute confidence that they belong. It goes down when running or acting suspiciously, such as when fiddling with someone’s computer, but if your blend has been sufficiently built up enough then you may have the benefit of the doubt long enough to get away with it.

The spy must also be aware of the guards around them, but only to the extent of which ones are currently looking in their direction. Special skills include some kind of really determined walk that makes you look like a total professional who mustn’t be disturbed – maybe with your sleeves rolled up and holding a clipboard – and that one really hilarious ability from Prototype where you throw suspicion on somebody else and then eat all their friends.

The conman’s chance to shine comes only after a guard spots him. Indeed, while the sneak avoids guards altogether and the spy concentrates on not looking out of place, the conman actively seeks out guards, in order to win them over with confident words and a winning smile. The best equivalent for this mode is using a persuasion dialog option in Mass Effect or Vampire the Masquerade: Bloodlines to pacify an environment, or the rather awful section of early LucasArts adventure Indiana Jones and the Last Crusade in which Indy must explore a castle and use trial and error to figure out what dialog path will get him past every individual guard.

I picture something a little more organic, though, with a gameplay style based around observation and intelligence gathering. The conman can look a guard up and down as they come bearing down demanding to know their business, notice the guard’s name badge and drop the guard’s name to convince him that they’ve already met. Or perhaps, earlier, the conman noticed the name on the head of security’s door, and now picks the dialogue option that drops that particular name. From three variant spellings, so that there’s an element of memory challenge. If the conman can convince the head of security themselves, that can make all the other guards harmless, too.

The conman’s special skills make the dialog picks easier, knocking out incorrect ones and making guards slightly easier to convince, but since they put themselves in the greatest risk they also have skills for effectively legging it. Perhaps they could have the skill to run away, and then stand just around the corner leaning on a wall with their hat tipped over their eyes as the guards run straight past them. Then they light a cigarette and all the ladies in the audience ruin the upholstery.