The video games we call RPGs were originally based on pencil and paper roleplaying games. Early entries in the RPG genre mimicked a “game master” describing a fantasy world to the player, but this was because early technology didn’t allow for much beyond simple text adventures. As technology evolved, so did the RPG. Text descriptions were ditched in favor of graphical worlds and voice acting, and the game master faded away. Today, the RPG is a more cinematic affair, sharing more with modern action games than the pencil and paper games of old. That’s what makes Steve Jackson’s Sorcery so unique. In a world where even budget games can include top-of-the-line graphics and action based gameplay, Sorcery decided to do things the old fashioned way. 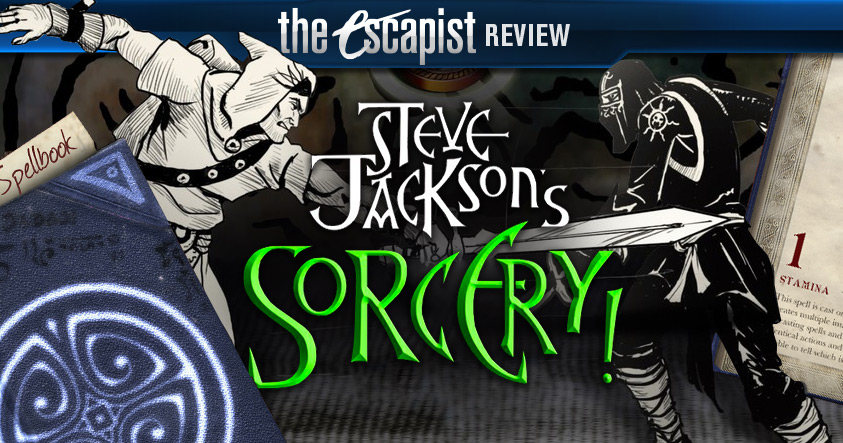 Based on a series of gamebooks by the same name, Sorcery put you in control of a nameless protagonist questing for a crown. Like a traditional pencil and paper adventure, the plot is revealed as you speak to NPCs and travel to new locations. Names of new people and places will hit you at a rapid pace. It’s hard to keep track of them all, but when the story references a name you do remember you get these tiny little “EUREKA!” moments that bring a satisfying amount of clarity to the story.

The graphics in Sorcery are incredibly simplistic. The world map is drawn like ink on paper, and your character is a black and white cut out with no frames of animation. It’s more accurately a digital representation of a game map and figurine than it is of the actual world you are traversing.

Instead, the world is brought alive by the game’s expertly written narration. Every step and action you take is accompanied by a full description of where you are and what you did. Statements like: “Beyond the river you can see a long wide track with trees lining the left-hand edge and a wide feels of long grass on the right. In the far distance, a curl of smoke indicates a village.” Every so often you will also get to see a pencil drawn piece of art which accompanies the narration, much like a side image in a roleplaying player’s guide.

Each attack you make is accompanied by narration describing what you did and how it hurt the opponent. When you cast a spell, you get a unique description of the spell’s effects depending on where you are when you use it. Even opening a door or walking down a path gets you yet another chunk of text narration. For pencil and paper veterans there is something very familiar about this style of narration. It’s everywhere, but it’s not intrusive – it’s actually quite pleasing and nostalgic.

Story is at the center of Sorcery, and player choice is it’s main gameplay mechanic. Do you attack the thief or let him go? Do you travel up the treacherous mountains or try your luck with the river sprites? Every choice makes your path diverge, telling an increasingly unique story. At any point if the story isn’t to your liking you can rewind the game to any decision point, like sticking your thumb between the pages of a choose your own adventure. Every decision is saved automatically regardless of how far you are in the game. You can interrupt the final boss fight to warp back to your first fight with a kobold if you really want to.

If you are the kind of person who can’t enjoy a game without numbers, fear not, there are plenty to be had. Battles work on a wager system. Every turn you and your opponent wager some of your attack power and if you spend more, your attack hits and their attack misses. Defending halves the damage you take, but also restores some attack power. Your goal is to wager just enough attack power to barely beat your opponent’s attack. This will allow you to consistently deal damage while spending as little attack power as possible.

There is a bit of interplay between magic and combat, as magic costs stamina. Stamina is essentially your HP, and if it ever falls to 0 you die. Carefully rationed, you can get through combat without losing stamina, but flubbed attacks will quickly kill you. Most encounters can also be bypassed through the use of a single magic spell, if you have the stamina to spare. Every conflict asks whether you are good enough in combat to come out unscathed, or if you just want to cast a spell and be done with it.

So here is what Sorcery has to offer: a simple combat system, a ton of narration, and character choice absolutely everywhere, but it’s certainly not a game for everyone. If you don’t like reading big chunks of text, or are not a fan of fantasy novels in general, then this isn’t the game for you. You’ll be filling gaps in the story with your imagination that would otherwise be directly explained in a similar game. In addition, if you are looking for a game with a deep gameplay system, Sorcery isn’t for you. The combat is simple, stale, and random, and since you can rewind at any point the results of it aren’t even permanent.

Sorcery is essentially a choose your own adventure novel with a few riddles and numbers thrown in. As a mobile game it’s perfect, allowing you to stop whenever you want and rewind if you haven’t been able to keep track of the plot. As a PC game, however, it struggles to hold your attention for long periods of time. But at a 10 dollar price tag it’s a pretty good diversion while you wait for the next big RPG to come out. If you are a pencil and paper junkie like me, it will, at the very least, give you nostalgia for the old days of sitting around a table trying not to spill your Mountain Dew on your character sheet.

Bottom Line: Steve Jackson’s Sorcery! Is an interesting digital implementation of a pencil and paper gamebook.

Recommendation: Fantasy novel fans, pencil and paper roleplayers, and anyone who really loves character choice will have a fun time with this game.