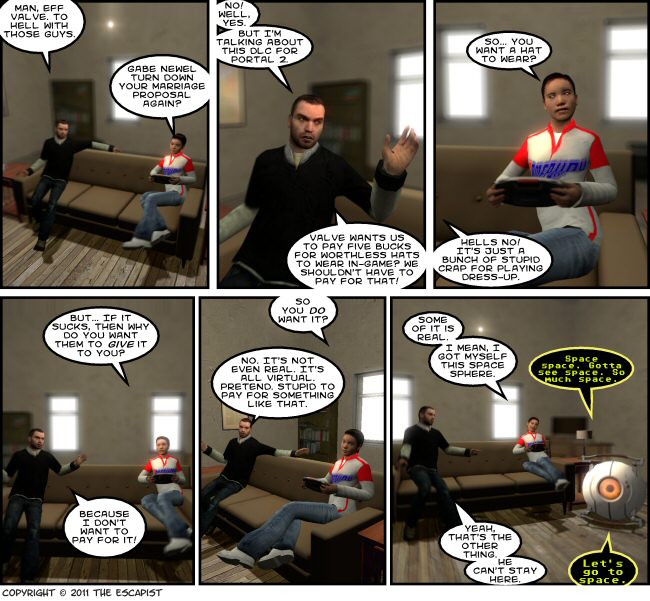 I didn’t understand the position that “These Portal 2 hats are worthless, therefore we should get them for free.” Obviously if there were actually worthless, nobody would want them at all. So the problem people have isn’t that they don’t want the items, but that they want them to be cheaper? Or something? And if you want them to be free, why not demand other stuff for free? Does that work?

For the record, I didn’t buy any hats.

The odd thing is, for all the controversy surrounding this, it’s probably going to be a non-issue in the long run. The avatar dress-up items are only available in the multiplayer portion of Portal 2, which is reportedly five hours long. This isn’t Team Fortress 2, where people will come back again and again. This is a series of cooperative puzzles. There just isn’t that much replay value there, which means there’s not a lot of reason to buy hats. Certainly not for the prices offered. For Portal 2 to work the way Team Fortress does, there would need to be a steady supply of new maps coming out. A few people have bought the hats and I wish them well, but I don’t think Valve should be banking on Portal 2 hats being a new cash cow. This isn’t really a good venue for that sort of transaction.