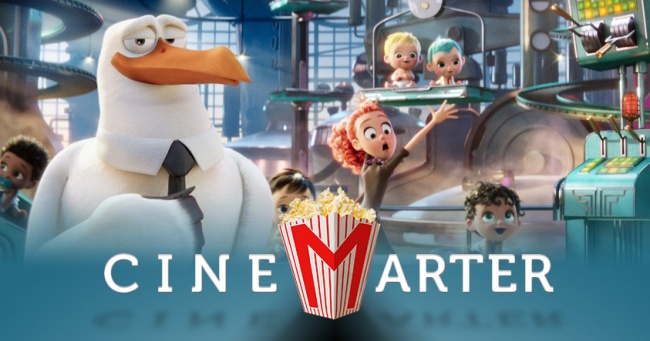 Storks immediately seems like an outdated premise for a movie – maybe intentionally. Do kids these days ever get told that “storks deliver babies”? I mean, that hasn’t been a thing for a long while, right? So the fact that Storks is set in a time in which the birds don’t do this anymore makes sense – until we find out that the plot revolves around a bird having to do exactly that. We got part of the way there. That’s better than it could have been (and so is the movie).

Yes, storks decided that dealing with loud, squishy miniature humans wasn’t best for business, so they decided to use their delivery skills for packages instead. They founded Cornerstone – basically just Amazon – and have been successfully delivering packages for a long time. Their only human employee is Tulip (voice of Katie Crown), who was supposed to be a delivery before her tracking beacon was destroyed and she was orphaned. The company decided to keep her. She’s our co-lead, alongside the company’s top delivery stork, Junior (Andy Samberg). After a mishap involving a letter, a new baby is created and they only have a weekend to get it to its family – lest there be “serious” consequences. 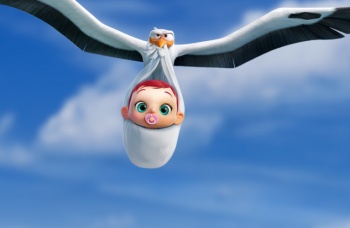 Basically, it’s an adventure film with a stork, a human, and a baby. They get chased by wolves, they get into a (quiet) gang fight with some penguins, their airplane breaks down, and an annoying pigeon co-worker (Stephen Kramer Glickman) stays on their trail, as he aims to catch them in the act and report them to the boss (Kelsey Grammer). There are jokes, there’s a bit of action, there are parenting analogs, and it all passes by at a decent enough clip.

We also cut between our leads and the expectant family. The kid (Anton Starkman) sent the letter, and his busy parents (Jennifer Aniston and Ty Burrell) decide to indulge his whims – despite knowing the storks no longer deliver babies – because they finally recognize that his childhood is passing them by. It’s a sweet subplot, really – even if it gets a little crazy and develops too quickly. But, hey, it’s an animated movie for kids; take the small victories.

Storks could’ve been a whole lot worse – as most who saw the first teaser trailer will likely understand.

The plot isn’t complicated and doesn’t go in any direction you won’t see coming from the outset. It gets a little sillier than you might expect – the wolves have a running gag that is ridiculous, but funny – but there isn’t anything unexpected. There isn’t really much here for adults, save for a couple of office-relation gags, but it isn’t going to offend your intellect, either. Kids should enjoy the jokes and the talking animals and the bright colors – although after a certain age they, too, will likely gawk at some of the plot points.

Sometimes when big-name actors are hired for an animated film, it’s to cover up a lack of quality. And while Storks has some big names – Andy Samberg, Jennifer Aniston, Ty Burrell, Kelsey Grammer, Danny Trejo, Keegan-Michael Key, and Jordan Peele – it uses them well and does allow two key roles to go to lesser names. This yields a 50/50 return. Katie Crown as Tulip is energetic and expressive, and is very strong. Anton Starkman, meanwhile, can’t seem to get a line across without mumbling. The character isn’t bad – he’s got a good sense of humor – but the vocal performance leaves a lot to be desired.

Like many of rival studio Pixar‘s films, Storks is preceded by a short – and since I’m short of things to say about Storks, let’s talk about it. It’s about five minutes long and is basically a preview for The LEGO Ninjago Movie, which is currently scheduled for next year. Isn’t it weird that, somehow, The LEGO Movie avoided feeling like a shallow advertisement, but now we’re getting exatly that in a more-or-less unrelated product? The short is moderately funny – it’s a LEGO version of Peter vs. Chicken, but between a sensei and a chicken – but it grows old really quickly.

Storks could’ve been a whole lot worse – as most who saw the first teaser trailer will likely understand. But as an adventure movie about a stork, a human, and a baby, it basically does the job. It has some laughs, it contains enough action, most of the vocal work is strong, the animation is more than fine, and while it won’t offer much intellectually, it’s also not going to insult your intelligence. Storks is silly, generic, and passable.

Bottom Line: An example of a “harmless kids movie,” Storks is serviceable.

Recommendation: If the kids want to see it, you don’t need to try to convince them otherwise. It’s a whatever movie, but at least it’s not harmful.