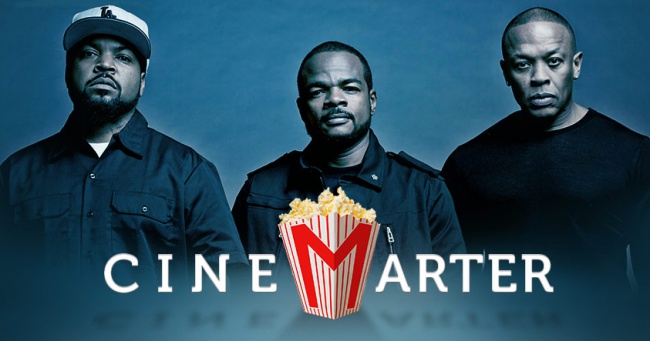 Despite only being around for half a decade and releasing two albums, hip hop group N.W.A. is arguably one of the most influential groups of its kind in history. It was controversial, it was free-speaking, and it really, really hated the police. It helped establish and popularize the subgenre of gangsta rap, it contained extremely profane and violent lyrics, and it established the careers of a couple of big-name entertainers like Ice Cube and Dr. Dre. It’s almost a little surprising that the story of its members hasn’t before been made into a feature film. With Straight Outta Compton, also the title of the group’s debut album, now it has.

The story follows the group’s creation in the late 1980s up until approximately 1995, after it was, for all intents and purposes, already over. The story is just slightly better than your typical rags-to-riches-to-trouble one: A few guys from Compton, CA get together, start a hip hop group, get famous way faster than they anticipated, and then start to have issues with the fame, authority, and with each other. Given that it’s based on real events, and because it follows a pretty strict formula, you’re likely going to be able to see where it goes from start to finish. 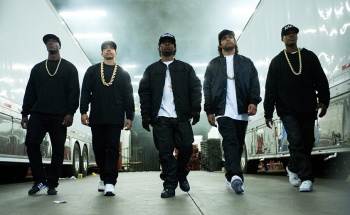 Does Straight Outta Compton‘s predictability hamper how incredible a film it is? The answer to that is an emphatic “no.” Despite running for over 140 minutes, featuring a cast of actors you’ve never heard of (and Paul Giamatti) and a director who’s never made a good movie, Straight Outta Compton is a marvelous film. It’s entertaining, it’s insightful, it’s funny, it has great music, it has fantastic acting, and despite being based around the year 1990, it feels unbelievably relevant when it comes to many of the issues we’re still facing today.

See, one of the biggest things that drove N.W.A. was the brutality and abuse from police officers toward black Americans. We see it several times throughout Straight Outta Compton – both on the television with the Rodney King case and first-hand to several of the group’s members – and it becomes clear exactly from whence the anger in the lyrics was derived. And given some of the recent events we’ve seen in the news, Straight Outta Compton makes us remember that these issues aren’t over. It feels relevant now to watch the struggles from almost 30 years earlier.

This is an incredibly enjoyable movie about the rise and fall of N.W.A., complete with great drama, fantastic acting, solid music, surprising relevancy, and even a bit of humor.

Outside of that, though, we get to watch the in-group drama, which eventually sees to various factions being formed and effectively warring with each other. The interpersonal relationships are strong, the dialogue is sharp, and the performances are amazing. It would be easy to pass off the acting as simple impersonations – the actors do look and sound like the group members from decades earlier – but they’re so much more than that. These are deep and powerful performances. Jason Mitchell, who portrays Eazy-E, should be considered for awards. Sure, his role is the showiest, but he’s unbelievable in it. O’Shea Jackson Jr. plays his real-life father, Ice Cube, and shows an uncanny resemblance. Corey Hawkins plays Dr. Dre, and is the most subdued of the three main members. Aldis Hodge and Neil Brown, Jr. plays MC Ren and DJ Yella, respectively. The aforementioned Paul Giamatti plays the group’s manager, Jerry Heller, and delivers his second slimy manager turn of the year – the first being in the also great Love & Mercy.

If the film has problems, they stem primarily from the predictability that come from its biopic clichés, as well as not quite having enough time to explore everything that it wants to. There are several times in Straight Outta Compton where something will happen – a member will be arrested, for example – and we’ll simply skip forward in time, never witnessing what happened after that, or even mentioning it again. It’s almost like Straight Outta Compton would have worked better as a premium cable miniseries than as a feature-length film. It needed more time. I wanted more of it. That’s indicative of its quality. If I’m anything, I’m someone who’s a proponent of movies not being longer than they need to be – cutting out the fat is almost always a good thing. It’s a rare movie that needs to be longer, but Straight Outta Compton might be one of them.

You’re not going to get a totally honest biopic while those involved are both (1) alive and (2) signed on as producers, but Straight Outta Compton is insightful and entertaining enough that it hardly matters. This is an incredibly enjoyable movie about the rise and fall of N.W.A., complete with great drama, fantastic acting, solid music, surprising relevancy, and even a bit of humor. It could’ve been longer, and it could’ve avoided some biopic clichés, but those are afterthoughts when looking at the whole picture. Straight Outta Compton is a visceral and powerful film that is absolutely worth the trip to the cinema.

Bottom Line: Straight Outta Compton is a powerful biopic that overcomes its clichés to deliver an emotionally impactful and incredibly relevant experience.