I may have given the impression, in my review of Gears of War 4, that I picked up on a degree of repetition in the dialogue. And not just in the mid-combat quips, which are inevitably going to repeat themselves in organic gameplay because there are only so many ways a burly man can crow about grubs and the scratching thereof; the conversations designed to move what passes for the plot tend to be rather samey as well. 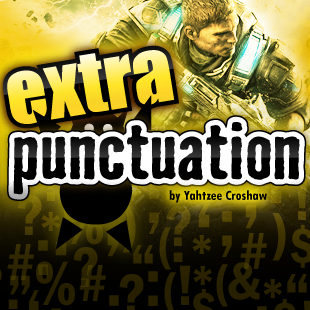 This is probably an inevitable result of the campaign consisting largely of identikit arena shootouts, and there not being much new to say about each one. But that’s giving up too easily. It’s just a matter of more creativity. I’d like to take a moment now to identify five of the most unbearably overused lines, analyse their usage, and propose a few alternatives.

“Holy shit!” (Variants: Oh shit, oh my god, fuck, etc)
Gears of War takes place in a world where people have had to accept that occasionally the ground will open up and monsters will come out to murder them and their family. You’d think people would have gotten bored of reacting to every new giant threat or awe-inspiring sight with the same incredulous cuss every time. There’s got to be a point when the sight of a giant monster rising from the ground doesn’t have the same impact as the previous times it happened that day.

In many ways, the repeated lines expressed by Gears of War‘s characters reflect the contempt the game has for its players. Nothing can be left to chance with you guys, so as well as the levels being completely linear and designed to funnel you along a specific path, the characters also frequently remind you that progress will only occur if you keep pressing upwards on the controller, in case you forget because you’re busy daydreaming about pies.

In keeping with the theme of treating the player like the absolute cretin they probably are, it’s also important that characters convey some kind of immediate reaction to proceedings that encapsulates the intended overall mood. This almost always takes the form of the above, as very little takes place that IS good. This line is often thrown out to greet the aforementioned giant monster scenario but can also extend to scenarios like locked doors, broken machinery, bad weather, and contracting syphilis.

“Let’s get out of here!” (Variants: None. This is always the wording. Always.)

A companion piece to “Let’s keep moving”, some might argue interchangeable with it, but the difference is significant, if subtle. Where “Let’s keep moving” implies forward motion to a specific destination, “Let’s get out of here” places emphasis solely on evacuating the present locale. The usual reason, voiced or unvoiced, is because the routed enemy may soon return. In practise, they never do, even if you stay where you are for twenty minutes to finish your pie, so the actual reason is to avoid exposing the bold-faced dishonesty of it all.

Another part of the post-battle formalities alongside the suggestion to keep moving in case more show up, since the game obviously can’t trust the player to deduce that there are no more enemies from such things as the music ending and there not being any enemies around. You know, the trouble with Gears of War is that it doesn’t feel like a war. In a war the enemy should feel like a constant, oppressive presence, but that goes away when the game falls dead silent after every arena shootout. It feels more like the enemy are all waiting behind a velvet rope perpetually just past the next door, and that a bloke who used to work at the waterslide is letting them through six or seven at a time. It’s like working a sixteen hour shift at the ghost train.