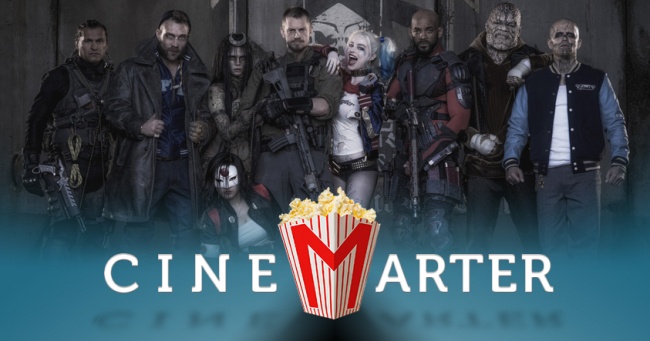 After the critical and financial disappointment that was Batman v Superman, Warner Bros. needed a strong bounce back with Suicide Squad. What they delivered was decidedly not that. It’s not as bad as the last film in the DC Extended Universe canon – mostly just by being tolerable – but it’s also not the smash hit that it needed to be. It’s a decidedly mediocre movie with a lot of problems and only a few highlights, leading to even more apathy about this DC Comics universe.

The premise is one of Suicide Squad‘s highlights. A bunch of comic book villains/antiheroes are forced by high-ranking government official Amanda Waller (Viola Davis) to team up to defeat an even bigger threat than they are. The film’s first problem is in the execution of this idea. The first hour or so of Suicide Squad is expository setup, giving us miniature back stories on most of its characters and mostly just waiting around for something to happen. Then it remembers it needs a plot, so it sends the Squad into an evacuated city to beat up on faceless baddies and then a boss fight.

Suicide Squad is boring for far too long before it ever becomes remotely enjoyable. If I were to take six paragraphs in this review to describe each character, you’d stop reading before I got to anything meaningful. But the film does that. And these aren’t well-written or particularly interesting characters, either. You can probably figure out most of what they have going for them based on the trailer or their names. What do you think a guy whose name is “Captain Boomerang” (Jai Courtney) is going to do? 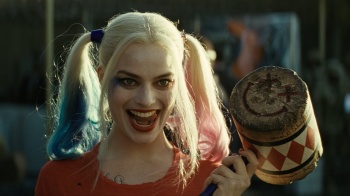 Here, I’ll do it. Deadshot (Will Smith) is a hitman who misses his daughter. Harley Quinn (Margot Robbie) is a former psychologist who fell in love with the Joker (Jared Leto) and is now crazy. Captain Boomerang is a bank robber who uses a boomerang as his primary weapon. El Diablo (Jay Hernandez) is an unfortunate Hispanic stereotype who can shoot fire from his body. Killer Croc (Adewale Akinnuoye-Agbaje) has a scaly skin condition alongside super strength. And Enchantress (Cara Delevingne) is an archaeologist who has become possessed by an ancient evil witch. There are also one or two others who are considered so inconsequential that the film doesn’t even pause to give us their back story.

Oh, right: They’re led into battle by Col. Rick Flag (Joel Kinnaman) and his bodyguard, Katana (Karen Fukuhara), and have a miniature bomb implanted in their necks to prevent them from leaving or disobeying. Okay, it took slightly more than a paragraph.

Much has been made about how “edgy” Suicide Squad would be, and it turns out that was mostly just a marketing stunt. The majority of the characters are villains who do bad things but are ultimately good people. The hope is that it’ll be cool to root for the bad guys. The result is more wishy-washy. We’re not given much reason to care about anything that happens, or about these individuals. One of them dies before doing anything of value, and the movie hopes we’ll mourn them because…?

Suicide Squad is a disappointingly mediocre movie. It takes too long to get going, and the payoff isn’t worth all the setup.

All of this might be forgivable if two things worked. The first is the chemistry between the cast. You give them enjoyable dialogue exchanges and we’re going to have fun. The writing isn’t strong enough to call this part a success, but it’s passable. Some of the scenes of the cast just having fun with each other are fun. The other important element was the action scenes. They needed to be more than just a bunch of people shooting or punching nameless, faceless monstrosities. But that’s what most of them are – up until the final boss fight, which is a mess. There’s very little fun to be had with Suicide Squad, and even the meager attempts at jokes to lighten the mood come across as try-hard responses to the same complaint about Batman v Superman.

Of the cast, the highlights come from Will Smith, Margot Robbie, Viola Davis, and Jai Courtney – of all people. They get pretty into it and feel like they’re having a pretty decent time. Smith’s character becomes the only one we can root for, and having someone with the talent of Smith in that role helps out. You might have noticed that Jared Leto as the Joker wasn’t among the shortlist. He’s horrible. He doesn’t seem to fit in with the rest of the movie, coming across like he wasn’t directed at all. It doesn’t help that, despite the second billing, he’s only in the film for about ten minutes, and that his character is mostly inconsequential. But those ten minutes are agonizing.

Other quick notes? The soundtrack is great, even if it often switches songs far too frequently. I think we were three songs deep after five minutes. Cara Delevingne is painful to watch as anything other than the ancient version of Enchantress. And director David Ayer was never right for this material. He doesn’t do PG-13 and he doesn’t often do “fun,” either. He can do edgy and crazy – as seen in Sabotage – but that didn’t make it to Suicide Squad, which is a studio-controlled entity that underwent extensive reshoots, which helps explain – but not excuse – its tonal whiplash and chunky editing.

Suicide Squad is a disappointingly mediocre movie. It takes too long to get going, and the payoff isn’t worth all the setup. The action isn’t anything special, the characters are thinly written, it’s tonally inconsistent, it’s difficult to care much about what’s happening, and it ultimately amounts to not very much at all. Could it have been worse? Of course! It’s tolerable. Is that enough? No, it’s not, especially after the last DC failure. Suicide Squad isn’t good.

Recommendation: It’s not bad enough to recommend skipping altogether, but maybe wait for the home video release. Hey, we might even get an “extended” cut just like Batman v Superman. (Not that that’ll necessarily be a good thing.)