So Sunset Overdrive didn’t make me laugh. Maybe it made other people laugh, it wouldn’t be the first time I was left behind by the rest of the consuming masses (by which I mean entertainment audiences, not some kind of amorphous Lovecraftian being). Hell, people still seem to persist with the notion that Joss Whedon writes funny dialogue. Who was it who once said that ‘sanity’ is just the most prevailing form of madness?

But while a lot of comedy is subjective — I personally think you can’t go wrong with a well-timed fart to the face, but some people get sniffy about that sort of ‘low-brow’ entertainment — there are a few universal rules, at which comedy scientists have been working away for generations. And I know Sunset Overdrive is very proud of its little post-punk smartmouth attitude with its ‘rules were made to be exploded’ tagline (except the rule that says you can’t play the game on anything other than Xbone, we’re perfectly fine with that rule apparently), but keeping in mind a few rules of comedy won’t make you a boring fusty old law-abider. It will, at worst, make your gags less fucking awful.

I’ll give you an example of one gag in Sunset Overdrive that almost worked. At one point, you rescue one of your entourage of support characters, and a third character, who’s not physically present but doing the Otacon radio voice thing where we hear them through what we assume to be a concealed earpiece, talks about the next plot point. And when he’s finished talking, the NPC who is physically present looks confused and asks, “How are we hearing your voice when neither of us is holding a phone?”

Now, this was leaning vaguely towards funny. It is then, as is Sunset Overdrive‘s pattern, driven straight into the fucking ground. The protagonist replies “Lol video games lol” (I’m paraphrasing here) and then they try to sustain the gag by talking about how the NPC will now walk off-screen and mysteriously vanish by the time control returns to the player. 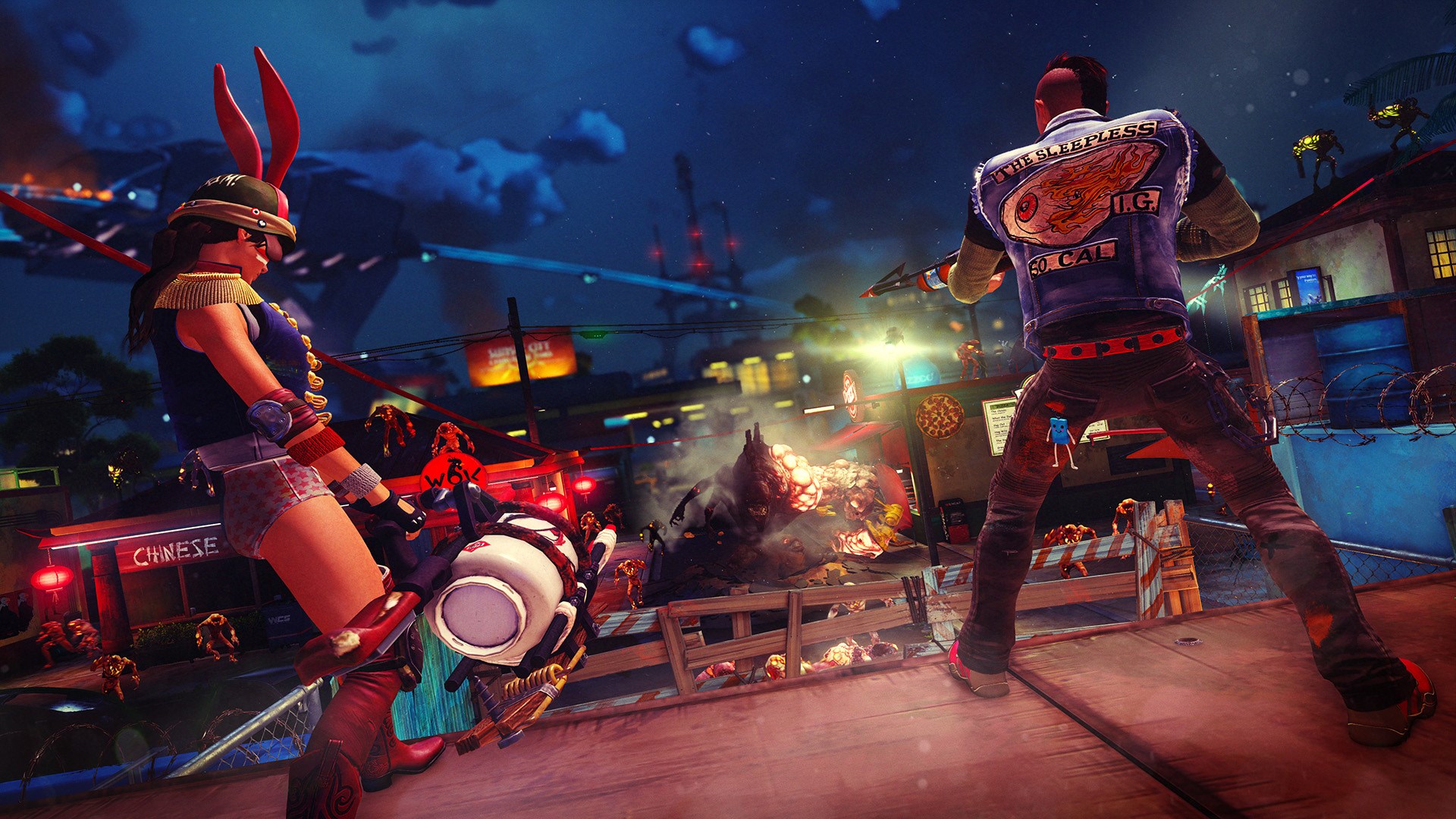 One of the most important rules of comedy (and indeed most artwork) is to finish strong. A joke needs to end at its funniest point. Hanging around after that is, for me, like writing down a joke and putting an exclamation mark on the end. It’s like immediately following a joke by going “DO YOU GET IT? IT WAS A FUNNY JOKE WASN’T IT?” in a desperate panic at the thought you might not be coming across as the raconteur you picture in your head. The reason why the joke was halfway decent with the first breakage of Sunset Overdrive‘s incredibly brittle fourth wall was because, at that moment, whatever humor value is inherent in fourth-wall-breaking was being bolstered by it also being a surprise. Up to that point, the scene had been relatively straight.

And that brings us to another general rule of comedy: the importance of juxtaposition. Many jokes are massively enhanced when delivered with a perfectly straight face. It’s about peaks and troughs – you let things settle down to one level and then unexpectedly jump back to the other. Sunset Overdrive has Sacred 3‘s problem in that it feels like some poor bastard was given the job of going through every dialogue line and crowbarring in some kind of ‘witticism’, regardless of context. And by trying to stay on that level throughout the entire experience, it comes across as forced, and it loses the audience.

I’m not saying a gag can’t stay funny if it draws itself out longer, but it needs to be able to keep the energy going. What springs to mind is the Every Sperm Is Sacred musical number from Monty Python’s Meaning of Life. In a behind the scenes interview I once saw, Terry Jones made the point that if the energy in that sequence had dropped, even for a moment, then the effect would have been lost, and I agree. It had to be big smiles and high kicks from start to finish because the joke lay in the utter hyperactive glee being juxtaposed against the song’s subject matter. Sunset Overdrive was trying to keep the energy high with snarky sarcasm, a school of humour better suited to a lower-energy deadpan route.

But I’ll say this for Sunset Overdrive – it did make me go back and replay Saints Row 4, and I’m glad I did, because in comparison, it’s a fucking masterwork. I think ‘not taking yourself seriously’ is overrated as a virtue (certainly seems to come up in online dating profiles a lot), because Saints Row 4 takes itself completely seriously, and that’s why it’s funny. It doen’t make so much as a dent in the fourth wall: everything that takes place is consistent with the overarching story that we’ve been put in a cyber-prison by aliens. No need for wink-nudges or forced gags, all it needs to do is put on a straight face and, in a completely serious voice, say “Here is a gun that shoots Dubstep. Use it wisely.”

And I think Sunset Overdrive falls so short in comparison because it comes across as being too good for itself. It’s aloof, it introduces shallow concepts and characters and then mocks them for not being as smart or cool as people like us, right viewer? Whereas Saints Row 4 is completely on the level. Completely down and comfortably settled in the depths of uncompromising silliness and it wants you to come down and join it, so we can all have fun and not care about how we must look.

As the president runs through the besieged White House watching all their friends being abducted, powerless to assist, we’re engaged with all their panic and confusion. Then they jump into an American flag-patterned ground-to-air cannon and start blasting at the invading alien ships that have arranged themselves into a Space Invaders pattern. Just like Every Sperm Is Sacred, if the game had paused even for a moment to glance back over it’s shoulder, it would have become as Lot’s wife a pillar of salt, or Orpheus as Eurydice disappeared back into the underworld.

But what really makes Saints Row 4 is that the comedy is more than just a crutch, it’s an essential part of the message. These aliens have tried to imprison the Third Street Saints and force them to submit to a world of order and servitude, but they haven’t reckoned on the indomitable human ability to turn any situation, no matter how serious, into a target for ridicule. And so every silly outfit and slapstick car impact becomes an expression of rebellion against our captors, culminating in a final cheering victory for human whimsy. A defiant, square-jawed salute with a giant floppy dildo bat.