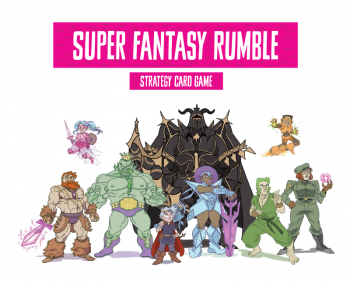 It’s not common that you find an interesting tactical skirmish game that can be learned in ten minutes, but Super Fantasy Rumble managed to be not only easy to learn and fun, it seemed to offer a lot of variety for a complete game in a single box. Though I only played briefly with a pre-production copy at PAX East, it went from being a game I’d not heard of to one I’m excited to get my hands on later this year. The game takes clear cues from the best of mobile design, which is unsurprising, as that’s what developers Passion Project Studios – in reality just brothers Miguel and Luis Lugo – did before deciding to take this design to the tabletop. “The art style and characters were inspired by the cartoons we loved as kids,” Luis told me, “but we really wanted to spice it up – we added a lot of diversity in kinds of characters as we went.” It’s clear as you go who characters really are – that’s Mega Man, that’s Ken from Street Fighter – but that actually ends up being fun visual shorthand for how to use the characters.

Take the tactical feel of games like Final Fantasy Tactics, mix in the roster of everything great that was made in the 1980s and early 90s, and top it with a healthy dose of puzzle: That’s what Super Fantasy Rumble is. It’s a surprisingly simple premise that ends up being quite fun in execution. Each card in the deck is a character, and each player gets a team of six – two powerful leaders and four regular troops – via either random draw or a draft. Each card has a health value, an attack value, a defense value, a suite of special abilities, and some arrows on either corners or sides that indicate which directions they can attack in.

At its core, the game is a tactics puzzle. You place your six characters onto a four-by-four grid along with the other player’s six characters, and spend your turns doing movements and attacks in whatever order you see fit. Each turn, you can dash, castle, and slide. When you dash, you move a single character to an adjacent space. When you castle, you can exchange two of your adjacent character. When you slide, you can move an entire row of characters a single space in either direction, and if a character is on the end they wrap around, Pac-Man style, to the other side of the board. Each of your characters can also attack once each turn, which is a 2d6 roll at or under their attack value plus their opponent’s defense value – but only if their opponent is in a space they could attack. 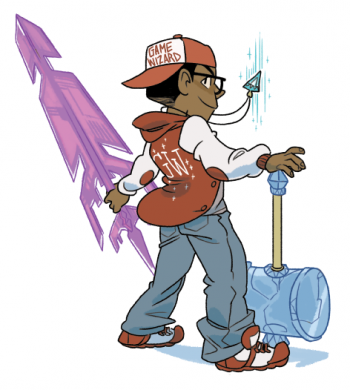 Characters also have special abilities in either red, blue, or green flavors. Those special abilities have values, and when rolled at or under on 2d6 they get to employ that ability. Red counts as a character’s attack for the turn, allowing for ranged damage or damage that moves an opponent. Blue moves allow for abilities like castling with an enemy. Green are used on the opponent’s turn as defensive measures. They’re interesting additions to the characters, and can sometimes dictate strategy – like abilities that can only be used on certain board rows – but didn’t offer so much choice that they slow down play.

In a fun twist cribbed from sporting events, when there are only a handful of characters left everything is removed from the battlefield and redeployed in a smaller three-by-three grid, and the player currently losing gets to take the first turn of the new half.

In the end, the game plays like a lightweight skirmish or tactics game, where positioning matters a lot but there’s very little posturing and jostling over empty board space. It gets you right to the interesting questions, like how you’re going to get the right characters into sequence to attack the enemies you need to bring down fast, and how you’re not going to make yourself vulnerable while you do it. That you only have a handful of ways to move your team each round makes the game like a complex puzzle, the reward for which is an excellent sequence of attacks that bring down your opponent’s key cards. Super Fantasy Rumble looks like a cannot-miss game of 2014 for skirmish tactics fans.

Super Fantasy Rumble is available directly from Passion Project Studios and will be for sale at retail in the latter half of 2014.