My, Mario always draws a crowd, doesn’t he. Plenty of responses to last week’s Mario Galaxy 2 ZP. Let me just put my antlers on and I’ll start butting away.

“It’s not really a surprise though. I mean, Nintendo have pretty much been re-using the same formula for Mario games for a long time.”
– JaymesFogarty

I had this same argument with a friend of mine not too long ago, so I’ll say the same thing to you that I said to him: you shut your fat fucking face. Yeah, Nintendo has proved itself to not be above the odd bit of recycling (here the word “Pokemon” appears in massive neon lettering on the wall behind me), but with Mario, their flagship franchise, the main platforming series (Super Mario Bros 1, 3, Super Mario World, Yoshi’s Island, 64, Sunshine and Galaxy) has always made some kind of significant evolution with each installment. Yeah, they often have similar themes and similar plots (only Yoshi’s Island doesn’t feature the princess being kidnapped on account of her being an embryo at the time), but the gameplay is always significantly tweaked, whether it be by space travel or a water pistol. Mario has almost been the symbol of Nintendo’s creativity, the recurring face upon an entire universe of very different games, and that’s why Mario Galaxy 2 is so disappointing. Mario has finally succumbed to the temptation of the fast buck. It’s the first time that a new Mario platformer has been more like a level pack than a whole new game.

Alright, alright, yes, the original Super Mario Bros. 2 was pretty much just a level pack too, but Super Mario Bros 2 doesn’t count. It was only released in Japan, and (as every one who thinks they know gaming should know by now) the SMB2 released in other countries was a re-spriting of a different game called Doki Doki Panic, with the original Japanese SMB2 only being released as part of the Mario All-Stars collection for the SNES as “The Lost Levels.” But this was before Nintendo had the money and technology to realize any and every creative vision, and we had 24 years of near-constant growth between then and now.

Incidentally, the whole reason Nintendo did that whole Doki Doki Panic re-skinning rigmarole was because they didn’t think they could get away with releasing a game so similar to the first in non-Japanese countries. Where the hell did the guy who made that decision disappear to? What’s changed since then to make the rest of the world as cowed and obedient as your fellow countrymen, Nintendo?

It seems that one of the main reasons the core series of Mario platformers changed significantly with each game was because they were on a myriad of different consoles with a myriad of hardware limitations, but now the constant changes that came from the ongoing competition to make the cleverest use of the frugal processor power available has ceased and stagnation has followed. The obvious solution is to make the process of game development challenging in different ways. I would suggest strapping live woodpeckers to the heads of everyone on the Mario design team. 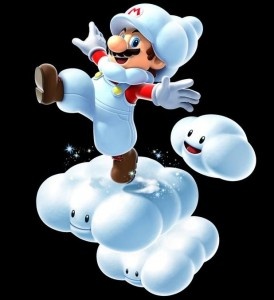 “But on what you said about Nintendo seeing players as retards – It’s a casual game, made for ‘the family’ so it has to be accessible to everyone.”
– Crossborder

You, too, can shut your fat fucking face. Mario, a casual game? Yes, it’s cartoony; yes, it’s not exactly strong meat for the intellectually minded, but a casual game? No. Wii Sports is a casual game. Angry Birds is a casual game. A casual game is something anyone can pick up, that a secretary might play to pass the time in between filing the minutes and fending off sexual harassment. Put Mario Galaxy in front of someone who’s never played a game before in their lives and see how well they do. It might even be funny at first, but eventually the urge to swat their clumsy hands away from the controller will drive you insane. It’s like teaching your granddad how to type.

Something we veteran gamers sometimes forget is that navigating an avatar in 3D space takes some getting used to. Once you’ve done it enough to adapt it’s like riding a bike, but for a first-time gamer, it can be very disorienting. That’s especially not handy when you’re playing a 3D platformer with all that pesky depth and precision jumping to deal with; I still find it difficult to judge whether or not I’m going to successfully land on a particular enemy’s face. The difficulty of adapting to analog stick 3D gameplay is probably one of the main reasons gaming can be intimidating to the newbie.

Awhile back Roger Ebert posted a follow-up to his anti-gaming post wisely retracting a lot of what he said, and he mentioned that many people suggested he should check out Shadow of the Colossus. And I was like, whoa, for a first timer? Don’t book yourself on the London marathon before you can walk. But then I had to ask myself – what game would I recommend to a first-time player to help them get into the whole culture?

This isn’t as easy as it sounds. It has to be simple to pick up, yes, but it also has to have a suitable difficulty curve that gradually introduces the kind of spatial reflexes hardcore 3D gaming will demand, so that excludes most casual games. It also has to be a good ambassador and sell the culture of gaming as a whole, so it can’t be anything fringe and spacey like Flower. It can’t be too retro like the original Marios, because it’s hard to get past primitive sound and graphics in today’s demanding times and we’re trying to sell gaming as it has evolved into now, not the whole DNA sequence. And on top of all that it has to be a game with charisma that the first-time player will be impressed by and want to get into.

I’ll leave the comments to come up with a list of all the games that might fit these criteria, but for now, here’s my recommendation: LittleBigPlanet.

Fucking the whole user-made content thing in the arse, LBP has a superlative art style, instant universal charm underlying some incredibly clever physics mechanics and amazingly good level design. It’s co-op, so you, the teacher, can easily guide your student through it. It’s largely a 2D platformer, but the limited three-level depth mechanic at least provides an introduction to the third dimension. It ramps manageably from ease to mind-melting difficulty. And the controls are floaty and annoying as shit, so the non-gamer will quickly learn what we have to put up with most of the time.