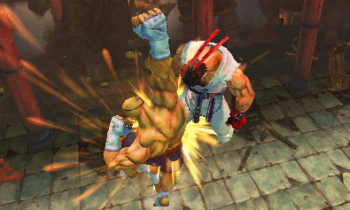 Super Street Fighter IV 3D Edition for the Nintendo 3DS apparently won’t be a chopped down version of its PlayStation 3 and Xbox 360 counterpart. A Capcom presentation has revealed a host of new details including online multiplayer and a full roster of characters.

Also confirmed for Super Street Fighter IV 3D Edition is worldwide online play. Players will be able to go at it against other fighters from around the globe in the palms of their hands. In addition, 3D Edition will include the ability to watch other people’s fights in progress through a feature called Channel Live.

Using a very Ghost Trick-esque style, new trailers pretty much show off everything else Super Street Fighter IV 3D Edition has to offer too, including more footage of the new 3D mode which is played from a different viewpoint.

The trailers display Super Street Fighter IV 3D Edition‘s sleep mode battle system that will have players scrambling to collect new figurines, and some kind of feature that apparently allows you to transfer your fight to another player. With the abilities of the 3DS, and rumors that make the PSP2 out to be a portable PS3, we might have to start changing our views of what a portable game can be.

Fourth Season of Torchwood Gets a New Subtitle and a Plot