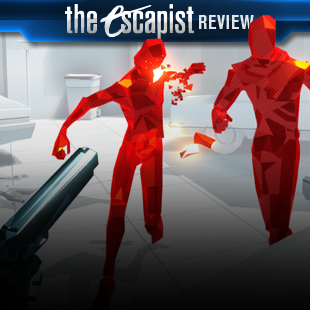 Superhot is a first person shooter that lives by three core gameplay mechanics: One shot to kill or be killed, all weapons have limited ammo, and time only moves when you move. Three simple mechanics that all add up to, if you’ll forgive the cliche, one of the most innovative shooters I’ve played in years.

The game is essentially an action movie scene simulator made up of about 30 bite sized levels that drop the player into a scenario with almost zero context, outside of a few stylized flashes of text that say stuff like “IT WAS A SET UP,” or “COME WITH US.” All you really need to know is that you’re good, red guys are bad, and the text on the screen is the law.

This all ties into a fun meta-narrative that has the player using a text based operating system called piOS to play Superhot by hacking into the developer’s network, with the implications of the act becoming more and more severe as the game goes on. It’s a bit non-sensical, but it leads to a great pay-off towards the end, and it fits well with the theme of the game. It also allows for some really cool secrets where the player can find special terminals hidden throughout each level that allow them to ask the developer questions about the game.

But Superhot is all about the action, and that’s where it delivers the most. With time being controlled by the player’s actual movement, it turns the game into more of a first person puzzle game than a traditional shooter. It also allows for some incredibly tense moments, like one level where you’re stuck in an elevator with three enemies that each have a gun drawn on you. Few games can match the level of badassery one feels when they can smack the gun out of the hands of one enemy, dodge the bullets of the other two, catch the gun in mid-air, and then proceed to pick them each off in a crowded elevator, then fire two more shots to take out the two enemies with shotguns waiting for you once the elevator doors open.

Superhot is filled not only with scripted moments like the one I described above, but tons of improvised moments where you are able to do amazing feats just by the nature of the time mechanic. Is a bullet coming your way and you won’t be able to dodge out of the way in time? Line your crosshair up with the bullet and fire a shot to block their bullet with your own. Out of ammo and there’s a guy with a shotgun about to shoot your face? Throw your gun at him, catch his shotgun in midair, and blast a hole through his chest. The amount of creativity allowed by Superhot‘s mechanics is nearly limitless.

The story mode will only run you about two or three hours, which is short, but also allows the game to never wear out its welcome. After beating the game, you unlock an endless mode featuring nine levels that aren’t featured in the story mode and a challenge mode that has you replaying story mode under a specific set of conditions. One challenge forces the player to play through the game using only the katana, while another sets the game to how it was originally envisioned in 2013, with no melee weapons, one-hit-kill punches, and no throwables. More levels in endless mode and challenges are unlocked by killing enemies within each mode, giving plenty of incentive to keep playing.

It would have been nice to have one or two extra abilities to provide a bit more of a sense of progression, and the hit detection can sometimes be a little wonky, but those are minor complaints when measured against just how much fun Superhot can be.

Bottom Line: Superhot is a shining example of how to build a game around a single clever game mechanic. Its story mode is short, but the unlockable Endless and Challenge modes provide plenty of worthwhile reasons to go back for more.

Recommendation: Fans of shooters, action moves, and even first person puzzle games would be well served to give Superhot a shot.