First of all – I’m going to be giving away a very minor Arkham Asylum spoiler in this article, so if you’re one of the three very stupid people who haven’t bought it yet, close your eyes and stick your fingers in your ears until the end of the page.

If there’s one videogame plot device that gets aired an awful lot, it’s supersoldiers. By that I mean, plots which involve the villains creating or turning existing soldiers into massive super-strong killing machines with shoulder muscles the size of armchairs, so that they can be used as an unstoppable fighting force. And as I may have already made clear on several occasions, I do wish that game writers would pack this shit in.

I can understand that it fits well into the gameplay/story balance. It means having a decently upgraded enemy for when the difficulty curve rises. It provides a platform from which boss monsters can be easily created (generally by having one supersoldier take twice as many vitamins as everyone else). There’s absolutely no guilt to be had in killing supersoldiers, nor the God-playing megalomaniacal generals that created them. And with supersoldiers come all the nice, safe, usual trappings – laboratories, mysterious machinery, big glass cylinders with dudes floating inside them and everything else that keeps the whole scientific folly theme ticking over.

But here’s the thing – creating supersoldiers doesn’t make the slightest bit of rational sense. First of all, you’re basically creating an entity whose only purpose is to fight, so what the hell are you going to do with them during peace time, pack them in a box? And this is assuming you could even control them. If they haven’t regressed to a slavering bestial state or been driven insane by the monstrosity they have become, how are you going to make them do your bidding, Mr. Small Fragile Human General? You really want to start issuing threats that might come back to haunt you when some leashes get slipped? To say nothing of the fact that the ethical lapse involved would be ruinous in a country where people fight for the rights of embryonic cell clusters, and that most supersoldiers could be effectively countered by, say, dropping a great big bomb.

It’s at the point that whenever a game villain brings up a supersoldier project, I immediately realize that they are an absolute cretin, thus destroying all perceived threat. It makes an especially small amount of sense for the Joker to pursue such a scheme (whoops, there goes that spoiler I mentioned). The leading cause of Joker henchmen death is the Joker’s own boredom threshold. I really don’t think all his henchmen being the size of forklifts would ultimately work in his favor. 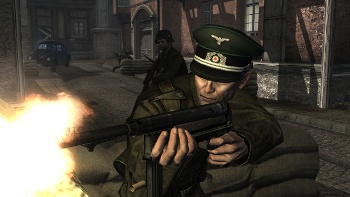 So, let’s see what we can do about this. We need a scenario that allows for a variety of big, formidable, human hostiles without any of the flaws or inconsistencies of a supersoldier development project. Here’re three ideas off the top of my head. So now there’s no excuse.

– In the near future, in the light of increased steroid abuse and that one guy with the false legs who can run really fast, the Olympic committee creates a third, separate Olympics – the Anything Goes Olympics, in which players can use as much drugs and body augmentation as they want. Then the genetic engineers get involved, and the games eventually become a splice-off between each country’s science teams, creating mutants ideally suited to each sport. Swimmers with dolphin tails, goalkeepers with hands the size of cars, etc. One fateful year, a large amount of psychosis-inducing drugs intended for the Greco-Roman event somehow finds its way into the rugby players’ half-time oranges. Now it’s up to YOU to stop a rampaging mob of seven-foot ogres in stripey shirts from eating the entire audience.

– In the distant future, archaeologists uncover a mysterious ancient building called a ‘Wal-Mart,’ and, to their astonishment, discover that there are living people inside. Having been sealed inside their place of employment for thousands of years, the Walmartians have evolved into a race of giants, gifted with super strength to help carry lots of bulk items out of the warehouse, eight feet tall to aid with the stacking of shelves, and possessing a language consisting entirely of inane greetings. They decide to take over the world for want of anything better to do.

– An aging general meets with a brilliant scientist and proposes a scheme to genetically engineer soldiers into superpowered behemoths. The brilliant scientist tactfully explains that genetics doesn’t work like that, while secretly calling for hospital security to take the aging general back to the Alzheimer’s ward. You play the aging general as he attempts to fight off hordes of hospital orderlies and security guards, who became big and strong by the much less interesting method of eating well and taking regular exercise.

“Wow! This is his best yet!!! Fuck me great review my god sir :D”
– Foggy_Fishburne, from the Wolfenstein comments

“That was painfully dull, are you starting to lose it..?”
– sramota, from two posts later

Thus, we see the polarization that the entirely-limerick Wolfenstein review brought on; some enjoying the rhyme structure, some decrying it as a gimmick.

Of course it was a gimmick. It was a gimmick for myself. Wolfenstein was not even bad enough to be funny, and the review would have otherwise been incredibly boring to write, so I had to come up with something to keep my interest alive. For that same reason, when I’m caught in a dull conversation at a party, I will force myself to speak entirely in iambic pentameter. Not really, but the video brought in more traffic than usual, so I win again.