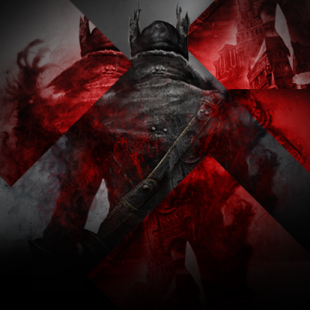 Bloodborne is hard. Don’t let anyone convince you otherwise. And it’s not just because it has extremely aggressive enemies that can often kill you with one or two good clean hits, or because of the many ambushes lying in wait around nearly every corner, or because of the two damn werewolves that are waiting for you on the way to the first boss of the game.

Bloodborne is hard because of all of those things, and the fact that it intentionally does not hold your hand at the beginning of the game. There are no tutorials, no tips during the load screens, and no NPC’s telling you “Try hitting the enemy after dodging!.” As refreshing as it can be to have a game that respects you enough to believe that you’ll be able to figure things out for yourself, it can suck to feel like you’re just constantly throwing yourself against a brick wall with no knowledge of how to actually break through.

So on that note, here’s a crash course on everything that you need to know to help overcome Bloodborne‘s steep difficulty curve and start enjoying what is no doubt one of 2015’s best video games.

Lesson 1 – Know What You Want To Be

All character builds in Bloodborne are viable, but when you create your character, you should know what stats you want to focus on and utilize gear that compliment those stats. Endurance and Vitality are important for every type of character, so if you’re ever not sure about what to dump points into, it’s never a bad idea to invest in those stats. Note though that Vitality is softcapped at 30 and hardcapped at 50, while endurance is capped at 40. All of the other stats are softcapped at 25 and hardcapped at 50. This means that adding points beyond the softcap will yield diminished returns, while adding points beyond the hardcap will simply be a waste of points.

When you pick your starting weapon, note the attribute bonus. The better the letter grade on a particular stat, the more that weapon’s damage scales with that stat. So if you wanted to make a character that focused on having skill as your primary stat, it would be a good idea to pick the Threaded Cane as your starting weapon because it has a “C” rating in skill. 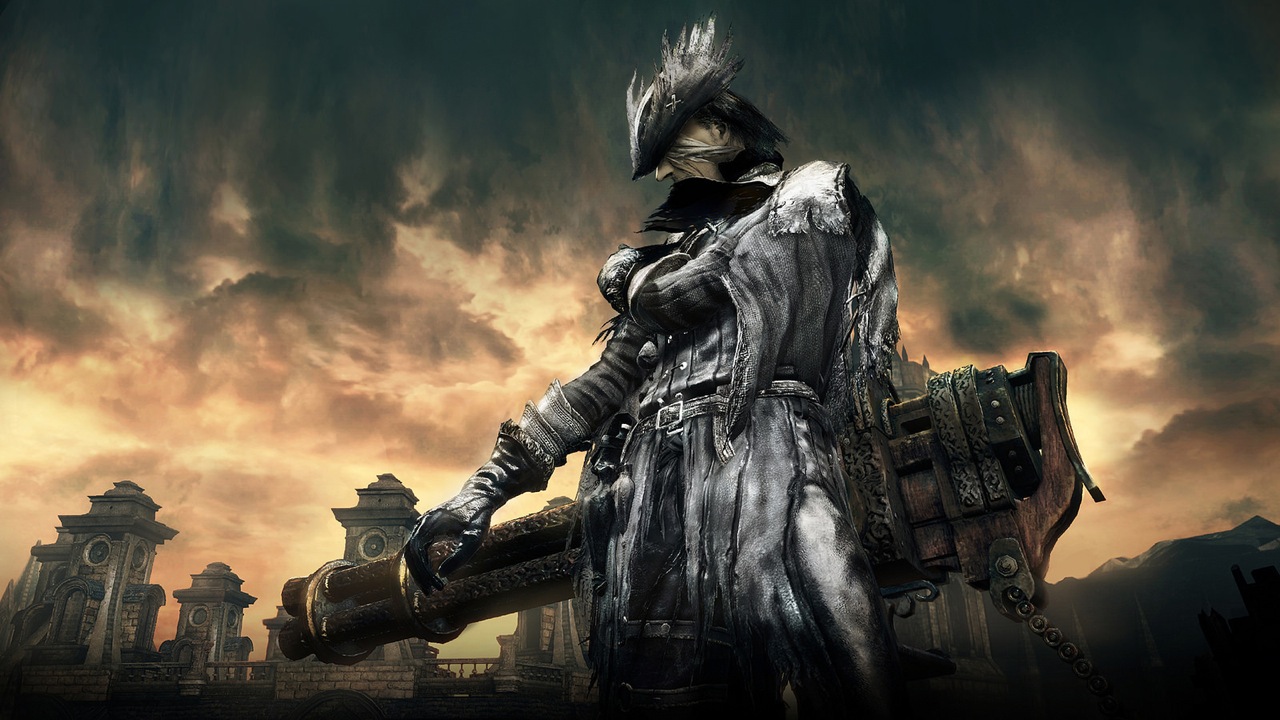 If Bloodborne is your first foray into the world of the Souls series, you might want to avoid picking starting classes like Noble Scion, Cruel Fate, and certainly Waste of Skin. The first two are classes that are focused on stats that only come into play in the mid and late game, while Waste of Skin is intentionally weakened for those looking for a challenge.

Lesson 2 – Your Gun Is Your Best Friend

Learn to love your sidearm. Maybe even give it a name. Kiss it to sleep at night. Whatever you do, don’t forget that it exists. Guns are the key to success against the larger and more predictable enemies in Bloodborne due to their ability to stun an enemy in the middle of an attack, opening them up to an extremely powerful “Visceral Attack.” Unless you are investing heavily in the “Bloodtinge” stat and have a decent gun that is sufficiently upgraded, you should almost never be using the gun for damage.

While it’s not realistic to use your gun against every enemy, you should always look to use it against werewolves, those hulking brutes with bricks, armored axe wielders, those creepy guys that point at you in the graveyard, and especially against the enemies with bags slung over their shoulder. Remember that your gun shot must land while the attack is on its way to hit you. You can’t just shoot them while they’re winding up. It’s a small window, but with practice you should be able to hit it a vast majority of the time.

Stamina management is one of the most crucial skills in the Souls series, and while Bloodborne is much more lenient with regards to stamina due to faster pace of the combat and lack of shields, its still very important to always keep an eye on your stamina meter. Try to avoid just mashing the attack button whenever you have an opening. You need to always be ready to dodge out of the way, and if your mind is just focused on attacking, you’re not only wasting stamina, but you’re also dulling your reaction time which will cause you get hit. 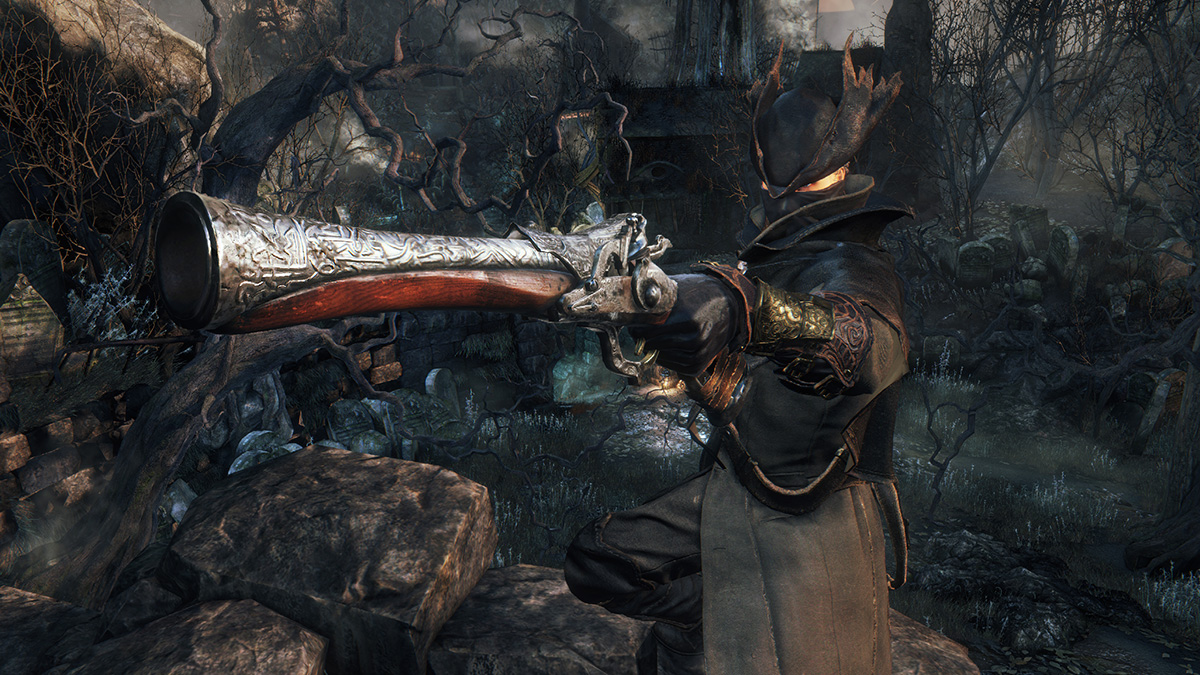 Enemies in Bloodborne have a nasty tendency to trick the player into thinking that they’re vulnerable, and then all of a sudden use a swift strike to knock the player away. Always be prepared for this by making sure that you have a little bit of stamina in the tank to be ready to do a quick dodge.

It just never makes sense to spend your valuable echoes on vials or bullets. As much as it may be a pain, you should always go on farming runs for supplies whenever you run low.

The best place to do so for vials is through the gate to the left of the Central Yharnam lamp spawn. Kill the first enemy you see for one potential vial, then go down the stairs to kill the two ogres. The ogres almost always drop at least 2 vials each, and once they’re done you can head up the elevator to the bridge where you’ll be able to let the boulder bowl over the group of enemies for more potential vials. After that, another ogre awaits you on the other end of the bridge for two more vials, and then just after him await two more beasts that have a chance of dropping two more vials each. From there, you can use the lamp at the Tomb of Oedon to return to Hunter’s Dream, then go back to Central Yharnam to begin the farm again.

If you want to farm bullets, the best place to go is to the woods just before the second village, Hemwick. You can get there by turning left before the stairway leading to the Vicar Amelia fight. Inside the woods you’ll find plenty of riflemen who will always drop bullets when you kill them. 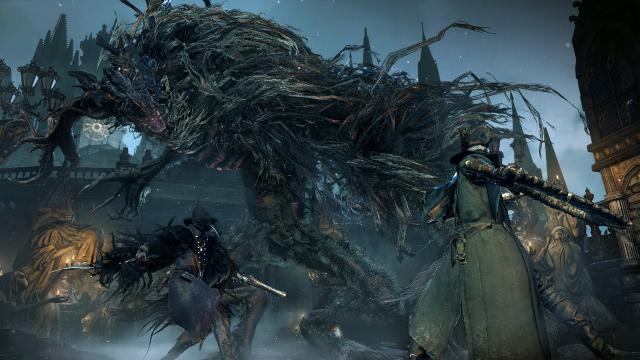 I know it may seem like the cowardly thing to do, but sometimes running away is simply the best option in a fight. The portion of the game in the beginning in Yharnam where all of the villagers are crowding around the bonfire is a perfect example. There is very little to gain from fighting all of those enemies. You don’t get many echoes from them, it’s very easy to get overwhelmed and killed, and chances are you’re going to use more vials just trying to survive than you’ll get once the battle is over.

Instead, try to take the path of least resistance. Run past the enemies into the next room instead of fighting them. You’ll find that a majority of enemies in Bloodborne don’t actually chase you very far.

The same is true for most large enemies. If there’s an enemy that’s giving you a lot of trouble and you can find a way around it, do it. Obviously, you won’t always be able to run past enemies or you’ll never get the echoes needed to level up, but at the same time don’t think that you have to fight every fight. You can always come back to an area once you’re stronger and satisfy your need for vengeance.

Lesson 6: If You Hit A Wall, Come Back To It Later

Chances are that you’ll reach a point in Bloodborne where you just cannot beat a boss. It’ll feel like all you’re doing is just throwing yourself into a meatgrinder, and paying echoes each time in order to do so. In cases like that, it’s better to just turn away from the fog door and check out your other options.

Explore pathways you haven’t been down yet, go back to a previous waypoint and see if you can find any loot that you missed out on, and talk to all of the NPC’s you’ve talked to again to see if they have any new dialogue. Not only will this refresh your mind, but you’ll most likely obtain plenty of souls needed to level up, find weapon upgrade materials, or maybe some new blood gems that will make your fight against the boss you’re stuck on much easier.

That’s the beauty of Bloodborne‘s design. There are so many different pathways to go down at any given time, especially once the game opens up when you reach the Cathedral Ward. 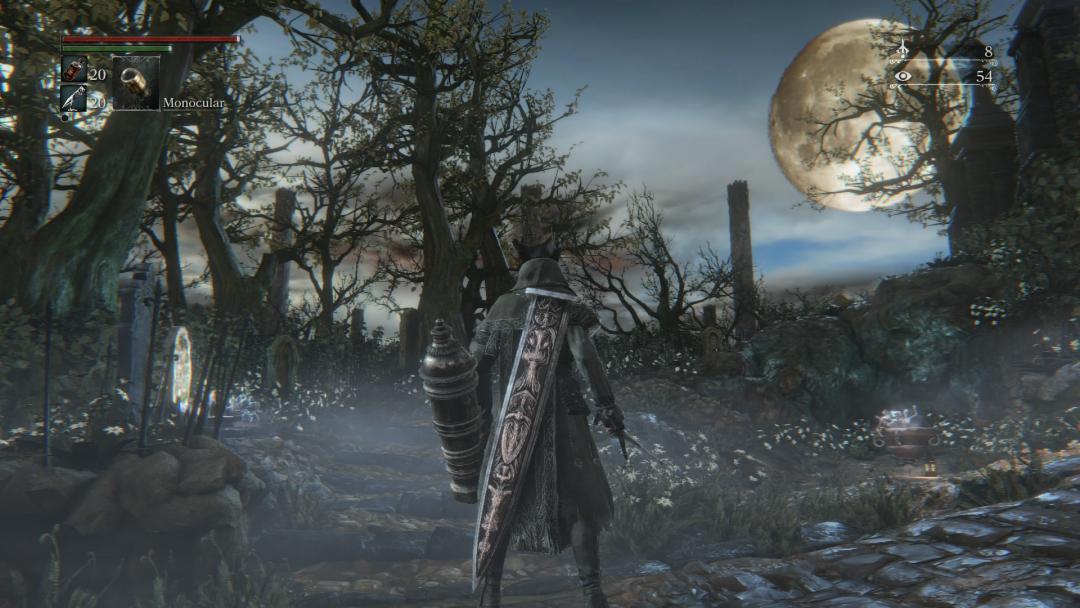 Never forget that you’re not alone when playing Bloodborne. Early on in the game you get what’s known as the Beckoning Bell. Use it outside of a fog door, wait for a couple of minutes, and the game will search for someone nearby who is ringing the resonant bell. Once a match is found, the resonant bell ringer will be summoned into the world of the beckoning bell ringer, and you’ll be able to tackle a boss together.

All that it costs to summon a player into your world is one insight, which can be earned by encountering and defeating bosses, or using an item called Madman’s Knowledge. They’re pretty easy to come by, and you’ll likely have a huge stockpile of them by the end of the game, so don’t feel like you need to be frugal with them.

If you’d like to help someone else, you can buy the Small Resonant Bell from the Insight Shop in Hunter’s Dream, which can be found through the door opposing the item stash.

This is probably my own number one killer. It’s extremely important in Bloodborne to know what’s around you. Make sure if you’re circling to your left, that there’s not a pillar or a fence, or a wall over there or you’ll find that you’ve got nowhere to go, which will be bad news for you. Also make sure you don’t wind up backing yourself up into uncharted territory. The worst thing you can do is unknowingly attract the aggro of a bunch of enemies that were minding their own business until you waltzed in.

And of course, never walk too close to edges. There just might be a trollish villager waiting to shove you off. 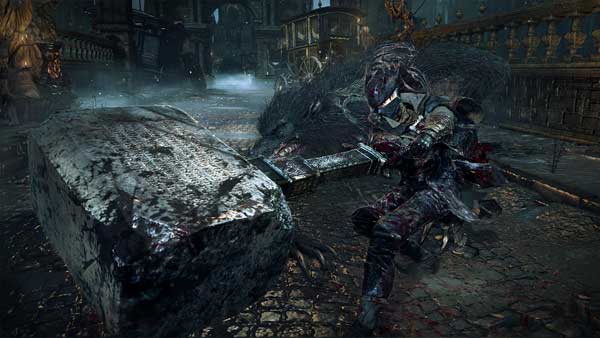 For the most part, you should lock on to enemies. It allows you to strafe around them, it gives you a nice and quick dash that you can use to dart out of the way and quickly close the distance, and it ensures that your attacks won’t miss. That being said, there are a few times when facing off against a large boss where not locking on is actually a better strategy. Not locking on allows you the freedom to run and roll in any direction, which can be invaluable for avoiding certain attacks. It’s also helpful when you’re aiming for a specific weak spot that you can’t lock on to.

Lesson 10: Use Pebbles To Draw Aggro

Pebbles are actually great tools for getting the attention of a single enemy without drawing the attention of a mob. Its especially useful to separate dogs from their masters, as fighting against a dog and its companion is an absolute nightmare. Chances are you’ll amass a huge surplus of pebbles over the course of the game, but if you ever run low, you can always kill some crows to farm some more.

And that’s it! Follow these 10 lessons and I guarantee you, you will see at least a 50 percent drop in rage induced controller destruction. Have any of your own Bloodborne tips you’d like to share? Drop a comment and let us know! 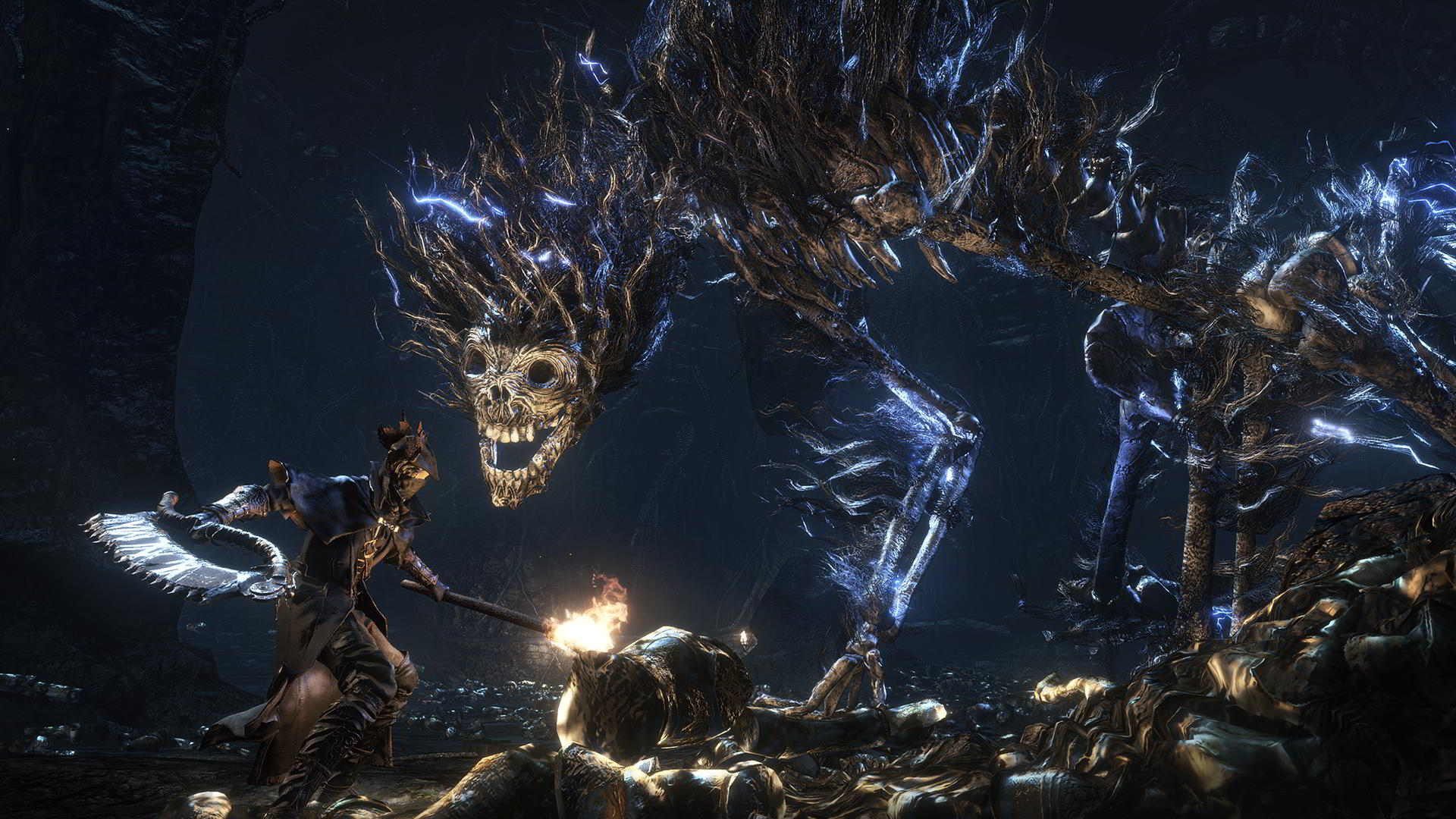