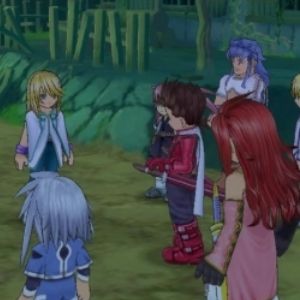 Nostalgia has a funny way of making you remember something being a lot better than it was. With some more context, it can help you appreciate the past and recognize that not everything was better “back in the day.” Tales of Symphonia and I go way back to 2004 when it was one of the few solid RPGs on the Gamecube. Ten years have passed, and the remastered version of two games coupled together as Tales of Symphonia Chronicles has the same charm with slightly updated visuals and a Japanese audio option.

Tales of Symphonia begins like a fairly standard RPG. Lloyd Irving is a young guy who’s better at fighting than he is at studying. He’s idealistic, he believes in equality, and he wants to help everyone. Of his two friends, one is a genius and the other is the Chosen One, a girl who must go on a journey to save their world from monsters and the Desians, a group of people who enslave others in human ranches. Other party characters include a mercenary who knows more than he lets on, a professor, an assassin who turns friendly, a Casanova, an emotionless girl, and a convict. The end goal for this group of colorful characters is to save the world and replenish its mana.

The Tales series uses – and often reuses – tropes like the idiot hero, the chosen one, absent parents, and kid heroes. Tales of Symphonia‘s strength lies in how well it uses these tropes. Most notable is the game’s deconstruction of the savior. The world rests on the shoulders of a 16-year-old girl – and the game knows this is not healthy.

A black and white view of morality dominates the beginning narrative as Lloyd is committed to killing the Desians because they hurt humans. Beginning in the first town, villagers insist that elves are cool while half-elves are scary and cruel. A big part of this comes from the introductory antagonists, the Desians, being made up of half-elves. As Lloyd travels and meets new people, he gains a better understanding of society’s bias against half-elves, and his own morality becomes complex. He refocuses his efforts to the larger causes of an unjust world as opposed to the symptoms. Lloyd’s empathy and other characters’ struggle to shake away the racism they’ve digested help the player see our own society’s unequal power structures.

The battle system requires the player not only to be active but also to vigilant. Tales of Symphonia‘s fights are in real-time and with an active party. The player primarily controls the actions of one character, who you can change in and out of battle, and execute combos. While doing this, the player can tell other party members to use specific skills and adjust the team’s strategy, easily prioritizing whether to set a character’s priority to heal, head into the frontlines, or attack from afar. Fights, other than tougher boss battles, can usually be completed in less than a minute and sometimes as little as 15 seconds. The fast pace coupled with encounters not being randomized makes the typical aspect of grinding in RPGs – dare I say it – fun.

Spamming attacks is one legitimate approach to winning fights, but there’s plenty in the battle system to make strategy important for bigger foes. Characters can receive additional stat bonuses or special effects through Ex Skills. Some of these skills improve attack or defense, add combos, reduce casting time, or have personal effects for each character. Furthermore, while in battle the player can initiate unison attacks, triggering each party member to attack an enemy together, and if certain moves are used together, the two characters will use an additional combo attack. Characters have special moves that only can be triggered at certain times. There’s a lot of meat to the battles with unison attacks, over limits, and hidden special skills. Fortunately, these are explained over time and can be checked in depth through a manual in the party’s items at any time. 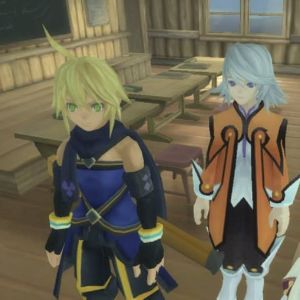 But Tales of Symphonia isn’t the only game in Chronicles. The sequel, Dawn of the New World is also included. Widely regarded as the less interesting of the two Symphonia games, it takes place two years after the events of the first game. The game follows two new heroes – Emil Castagnier and Marta Lualdi – in their quests for vengeance and restoration of the world’s balance. Emil has sworn to confront Lloyd for his alleged leadership of a massacre that killed Emil’s parents. It’s hard not to question and dislike Emil for this fact – spending 50 or so hours becoming attached to Lloyd creates some bias. Emil also acts downtrodden, and a large part of his character growth is about gaining confidence. While this may turn off people who want a more proactive hero, Emil’s place as a quiet pushover at the start sets him apart from the many older, gruff protagonists so common to video games today.

Dawn of the New World reveals that the solution Lloyd and his group created has caused as many problems as it attempted to fix. Instead of focusing on the difficulty of breaking down well-established systematic discrimination, the story focuses its attention on Emil and Marta’s personal vendettas. By neglecting world-building – even cutting out an overworld map that you can traverse in the first game – Dawn of the New World becomes significantly less interesting than its predecessor.

Dawn of the New World takes its predecessor’s battle system and is largely the same with a few additions. Characters can free run in all directions unlike in the first Symphonia, and due to fewer playable characters, Emil can capture monsters in encounters to add to the party in fights. This addition doesn’t make the game any more enjoyable; it’s often annoying and not worth a significant payoff. The previous cast will pop in occasionally and join the party, but they do not level up, and they leave later on.

Tales of Symphonia‘s age shows. Several of the annoying features of RPGs appear. Side quests are easy to miss, game overs are unforgivable if there are no nearby save points, cutscenes are unskippable, party members not currently fighting can’t be swapped in, and some retrieval quests in a dungeon force you to leave and backtrack if you don’t have a certain item. Many of these annoyances have been fixed in more recent Tales games, but seeing them in Symphonia 10 years after pulling my hair out over them the first time gives them a sour taste.

While Chronicles is labeled a remaster, it’s just about more of the same from its two original games. Graphics are notably improved in the faces of character models, but clothes and environments still appear blurry. Character outlines often appear jagged.

At the end of the meaty 50 or so hours it can take players to clear Tales of Symphonia, characters become so much more than their tropes. With backgrounds fleshed out, different dreams and desires, Symphonia‘s drama lies in character interaction. This unfolds in cutscenes and optional skits, short back-and-forth pieces of dialogue that are mostly light-hearted but occasionally reveal characters are keeping secrets.

Unfortunately, like many games, some of Symphonia‘s gags are unwarranted. A certain flirt who has prior history with one of the women of the group frequently teases her for her physical appearance. Jokes belittling women for their breasts weren’t funny in 2004, they’re not funny now, and they never will be. Each time this happens, she responds negatively, sometimes violently, but this is always played for laughs instead of something the male character shouldn’t do.

Tales of Symphonia Chronicles is cheesy. Characters proclaim, “Justice and love will always win” and “Courage is the magic that turns dreams into reality,” but cheesiness doesn’t make a game bad. With so many gritty games, I’m ecstatic for the chance to work towards equality for all, destroy systems that tell us to accept certain groups of people are better than others, and work for a better tomorrow.

Bottom Line: Colorful yet dark, Tales of Symphonia Chronicles effectively communicates its theme about ending discrimination while providing a fun and sometimes emotional playing experience. Dawn of the New World uses a similar formula, but loses the charm.

Recommendation: Both games are perfect for JRPG fans, especially for people who prefer to have quicker, more active fights than turn-based battles. However, Tales of Symphonia: Dawn of the New World disappoints more than it encourages wonder about the world.