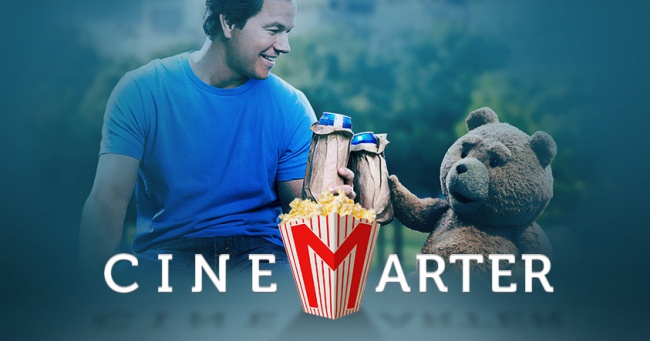 In case you’ve forgotten – it was three years ago, after all – Ted was a movie about a teddy bear that came to life, grew up with a man named John (Mark Wahlberg), and together they swear and smoke pot and contribute almost nothing positively to anyone; they’re clearly the most interesting protagonists in film history. It came to us from Family Guy creator Seth MacFarlane, who also voiced Ted (sounding exactly like Peter Griffin), and made a ton of money. Now we get a sequel, mostly because of that “made a ton of money” part.

Did we need a Ted 2? Probably not. Ted was, I’ll admit, moderately funny, but at least for me it came across as a disappointment. It wasn’t quite funny enough, it felt like an overlong Family Guy episode – MacFarlane’s style of humor struggles to work for a feature-length film – and there was only the bare minimum when it came to plot and characters. It wasn’t without some worth, but it was a forgettable distraction whose popularity continues to baffle me. 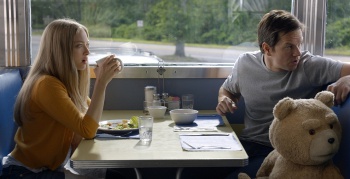 Ted 2, meanwhile, falls squarely into “unnecessary sequel” territory. This one sees Ted marry his girlfriend, Tami-Lynn (Jessica Barth), and together they decide they want to have a child. But since Ted is, well, a stuffed animal, and Tami-Lynn isn’t able to conceive, they wind up going the adoption route, only to learn that Ted isn’t considered a “person,” and as such not only can they not adopt, but Ted can’t work, their marriage has been annulled, and he is henceforth to be referred to as “property.” In order to contest this ruling, he and John hire Samantha (Amanda Seyfried), a recent law school grad who is willing to take the case pro bono.

This plot probably reads as more complicated than it actually is in the film. Mostly, it’s the bare minimum that the filmmakers could create in order to link their comedic scenes, many of which actually have no bearing on anything and were likely thrown in because they were either rejected from Family Guy or were too profane. Some of these scenes are actually directly lifted from Family Guy, too. I think the point I’m making here is that if you like Family Guy, but wanted it to be smuttier, live-action, and feature-length, then you’ll like the Ted movies.

Ted 2 feel like a toothless movie missing the bite that could’ve made it worthwhile.

I won’t deny laughing during some moments of Ted 2. One of the cameos near the beginning is great, a few of the scenes that have nothing to do with the plot are funny, and a running gag involving Amanda Seyfried’s eyes pays off quite well. But for a movie that runs for almost two hours, there weren’t anywhere near enough laughs for me to say that I can recommend it.

There are a couple of subplots thrown in that feel like they exist just to kill time – yes, including the requisite MacFarlane musical numbers, of which there are thankfully only two – far too many scenes where nothing much happens, and the entire production is as predictable as they come. All of that was true of Ted, and it’s even truer in the sequel.

Given that Seth MacFarlane isn’t exactly shy about throwing in his personal opinions into his work – Brian is a MacFarlane stand-in character on Family Guy, the lowbrow humor often critiques important subjects, etc. – it’s a surprise how little of that is in Ted 2. The whole situation involving Ted could have easily been used for this, but apart from a few instances – such as when one character mentions her ancestors used to be considered “property,” too – it’s mostly just about Ted as an individual and how he can prove that he should qualify as a person. I suppose that’s fine, but it makes Ted 2 feel like a toothless movie missing the bite that could’ve made it worthwhile – since the comedy alone isn’t enough, and the plot and characters are as thin as they come.

With an overlong running time filled with lacking characters and a thin, predictable plot, Ted 2 has to rely on its comedy to even come close to justifying its existence, and there just aren’t enough laughs here. There are some fun moments – it’s not a worthless movie – but they’d be too few and far between even if its running time was closer to 90 minutes, not 120. If you liked Ted, chances are you’ll like Ted 2, but if you were disappointed by the first one, the sequel won’t even come close to changing your mind.