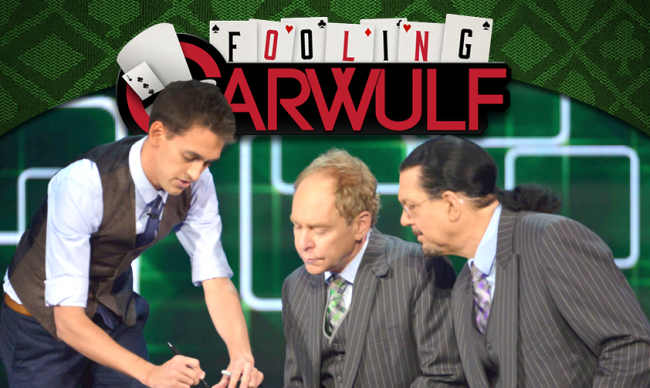 Once again, last night’s episode of Penn & Teller: Fool Us was pre-empted on some CW channels by a baseball game (for those who couldn’t watch last night, you can see it here). That’s a pity, because this was a pretty decent episode, with some new approaches to classic tricks.

So, as always, onto the performers:

Blake Vogt: The linking rings is an old staple of magic. By using two halves of a dollar bill instead, Vogt managed to make it new again. And, Vogt took a trick that is traditionally seen at a distance and transformed it into an intimate piece of close-up magic, to the point of allowing Penn and Teller to examine the linked “rings” (which should be impossible). It was a stunning and deceptive trick, and while it didn’t fool Penn and Teller, it was a great start to the show.

Joshua Jay: This was the best performance of the night, and not by a small margin. Jay knocked his routine out of the park. The trick itself was baffling – I have no real idea of how it was done, and neither did Penn and Teller. But just being deceptive is not what made this routine special… it was the patter, and the story of the little blind girl. Ultimately, Jay’s trick was about making a little girl happy, and that makes us – the audience – immediately invested, because we want to know that the little blind girl was amazed at the end. I don’t know if the story is true or just a framing device, but, deep down inside, I want it to be real.

Levent: This was a charming performance, and another case of an old classic – the “Sympathetic Silks” – with a new spin, along with some channelling of Laurel and Hardy (think “Who’s on First”). One of the merits of this trick is that the props are basic, which helps a lot in creating the feeling of magic. Everybody knows what a piece of cloth is, and what it should and should not be able to do. The production of the bottle and the rabbit at the end was a great example of escalation, and a perfect climax to the trick. It’s very entertaining, but I’m a bit torn by the performance. It’s a good routine as Levent presents it, but it’s also a very visual and self-explanatory one, and I can’t help wondering if the best modern presentation is silent, or with the barest minimum of patter. But that is just my own speculation – the performance was lovely, and while it didn’t fool Penn and Teller, it was wonderful all the same.

Ben Seidman: I really want to be more positive about this performance than I’m going to have to be. The fact is that Seidman is a great magician, and a great stand-up comic, and both shone through in his presentation. His version of “The Hold-Up,” by Tommy Wonder (1953-2006) was really good. His jokes had me in stitches. The problem is that the two parts of his presentation – stand-up comedy and magic – were not unified. The stand-up was too much of a segue away from the magic trick, and it felt like two separate acts jammed together, with a jarring transition between the two. It was a good effort, but it didn’t fool Penn and Teller, and the patter needed to be more streamlined and on-topic.

Penn and Teller: This was a routine I’d read about some time ago, and wanted to see ever since. I’ve talked at least a couple of times in Fooling Garwulf about making the connection to something greater in a trick – in this case, Penn and Teller used Gospel magic to turn a magic trick into a lesson on sub-atomic physics, or perhaps vice versa. It’s a great variant on “The Soldier’s Deck of Cards,” and entertaining throughout. To be able to make a trick like this work as well as they do is more than just skill – it’s art – and that brings me to this week’s commentary.

A number of years ago, Jamy Ian Swiss wrote that for magic to gain recognition as a performing art, it had to transcend technique. The core of his argument was that too many magicians stop at fooling the audience, and figure that is enough. However, the ability to fool and misdirect is the most basic required skill of a magician – seeking recognition for that alone is like a musician expecting applause after performing the scales. There has to be more.

Swiss is correct. There is an old saying regarding magic that people want to be fooled, but that isn’t really true. People want to be astounded and amazed. To stop at fooling people is to mistake the means for the end. However, just what to add and how to add it is something that magicians have puzzled over for a very long time.

The traditional image we have of a magic show is of the magician in tailcoats standing on stage and performing tricks. However, this suggests a uniformity that does not reflect reality. Robert-Houdin (1805-1871), the man who brought magic out of the fairgrounds and into the theatre, certainly matched this description, but much of this was a play for legitimacy. He dressed in evening clothes because that’s what his audience was wearing. He performed in the theatre to present magic as a sophisticated art form… and he owned the theatre. 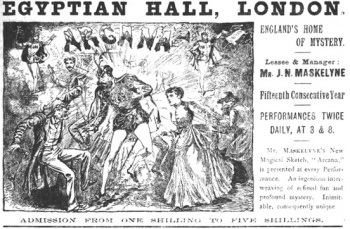 But Robert-Houdin’s approach, using the tricks as the primary focus, was far from the only one. 19th century spiritualists such as the Davenport Brothers (Ira, 1839-1911, and William, 1841-1877) presented their tricks as part of a seance. Their show began with an expert on spiritualism speaking to the audience about how the phenomenon was probably real, followed by the Davenports being bound by an audience volunteer inside a large cabinet prior to invoking the spirits. The cabinet was then closed. Mysterious phenomena would manifest inside the cabinet, which at the end of the show was opened to reveal the Davenports still bound.

This approach played well in America, but less well in Europe, where the Davenports were treated as con men rather than performers and entertainers. Notably, they never claimed to have supernatural powers – instead, they relied on their hired expert to provide the patter that would set the scene.

John Nevil Maskelyne (1839-1917), one of Britain’s greatest magicians, began his magic career as one of those who would debunk spiritualists such as the Davenports. While Maskelyne and his theatre, Egyptian Hall, would become institutions in English magic, he didn’t trust the effects to stand on their own. He began using them as part of a demonstration against spiritualists, adding his own touches and performing in a spirit cabinet. When he took to the stage with his own illusions, he presented them as visual effects in short skits. It was David Devant (1868-1941), another great English magician who Maskelyne took as his partner, who began to present the illusions on their own, without the accompanying sketches. This was an approach Maskelyne always considered with suspicion – as time went on, however, Devant’s approach won out.

Maskelyne’s approach, however, is one that has been returned to again and again, and remained controversial. In the 1940s, Dariel Fitzkee (1898-1977) wrote about showmanship using as his example a magic review, which worked many of the illusions and tricks into skits and musical numbers. Fitzkee’s approach was condemned by Darwin Ortiz in the mid-1990s, who described it along the lines of presenting the tricks as a bitter pill that the audience had to swallow with a large helping of water. And twenty years later, in the preparation for this feature, Misty Lee commented that a magician’s audiences have paid to see magic, and presenting that was the most important thing a performer could do, with making them care about it being the greatest challenge.

Just how to elevate magic beyond technique into art is a question that has never quite gone away, or been answered. At the annual FFFF magic convention – a prestigious, invitation-only convention with a waiting list years long – a number of the acts for the World Championship of Magic make their debut. Many of them resemble ballet more than traditional magic, with dance-like moves carefully choreographed to music. However, while this raises the level of art considerably, it has a trade-off: with little-to-no audience interaction, it risks boring the audience. And, if the audience has no reason to care about what is being performed in front of them, the art is irrelevant and the magic has arguably failed.

If there is one solid principle when it comes to elevating magic beyond skill alone, it is probably to make a personal connection to the audience. When one can use interaction and intriguing content to make the audience care about the performer and what they are doing on stage, skill transcends into something greater. Beyond that, just how to elevate magic beyond fooling people is a matter magicians have argued about for decades, if not centuries, and will likely argue about for decades and centuries to come.

Author’s Note: Courtesy of Treemo in the magic sub-Reddit, here is Penn Jillette talking about the reasons behind his reaction to Kostya Kimlat last week (embedded above).

Author’s Other Note: Since this is a feature about magic, we must ask for discretion when it comes to discussing methods in the forums. For the sake of preserving the mystery for those who do not want to know how the tricks are done, as well as to avoid accidentally exposing the hard work of some very talented magicians, please avoid revealing methods in the discussion threads. If you must talk about a method in a way that might expose it, please use spoiler tags.

Hear Nolan North as Ghost in The Taken King

Mario Kart and Skateboarding Collide In This Incredible Video