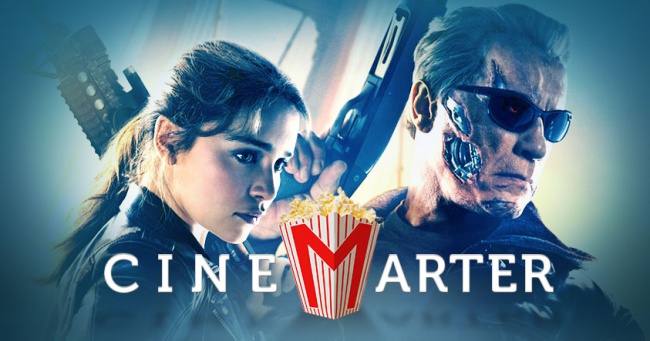 Terminator Genisys is the type of movie that starts off with a lot more promise than that on which it capitalizes. And I don’t just mean the large mythos surrounding the franchise, the ability to throw in time travel, or the human-killing machines that are Terminators, all of which is incredibly interesting. No, I’m talking about what happens within the movie, which gives us such a strong premise – taking scenes from earlier movies but seeing them play out differently thanks to new-found knowledge of the central characters – but only uses it to establish that both the past and the future can be changed. How? It’s not really made clear, and there are at least a couple of questions left open to answer in future sequels, but the point is this: after the opening scenes that deliver satisfying nostalgia, the film essentially transforms into a retread of Terminator 2: Judgment Day.

Stop me if you’ve heard this before. The world ended, half of the population was wiped out by self-aware machines represented by Skynet. The leader of the human resistance is John Connor (Jason Clarke). In order to stop John from being born, the machines send a Terminator back in time to kill his mother, Sarah (Emilia Clarke), before he’s even conceived. To stop it, John sends back a man, Kyle Reese (Jai Courtney). That’s basically the entirety of the plot of The Terminator, and it’s how this film opens, too. However, upon arriving in the year 1984, Kyle finds that the past is nothing like what he had expected. The same is true for the audience. 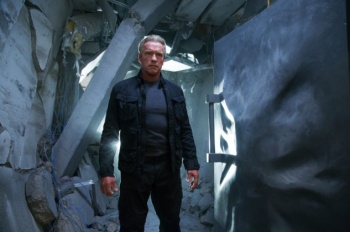 Instead of having to protect Sarah, he finds himself being protected by her. A Terminator (Arnold Schwarzenegger) was sent back to her when she was nine years old, and has been her guardian ever since. She knows all about the future, and she’s been training her entire life to try to stop Judgment Day from happening, and to kill any evil Terminators that the future Skynet sends her way. Okay! Now this is the way to reboot the Terminator franchise! Use a previously established strong female character, make her even tougher, and take all of the audience’s preconceived notions and throw them out the window. I’m on-board.

Unfortunately, this isn’t something that the filmmakers – including director Alan Taylor (Thor: The Dark World) – want to do for more than a few scenes. Soon enough, John and Sarah find themselves traveling to 2017, the date of Judgment Day in the new timeline, in order to stop an operating system, “Genisys,” which will reveal itself as Skynet after officially launching. The funny part? It’s been invented by Danny Dyson (Dayo Okeniyi), the son of Miles Dyson (Courtney B. Vance) – the character who invented the precursor to Skynet in Terminator 2. Our heroes have to blow up a big corporate building in order to stop it. Sound familiar?

I’ll give Terminator Genisys credit for moving at such a pace that it’s tough to even think about these sorts of things while it’s playing. We’re moving from place to place, time to time, and action scene to action scene so quickly that just keeping up is enough mental work to easily ignore the fact that we are, essentially, just doing something we’ve already done. What’s that called? Déjà vu? Is there a glitch in the Matrix? Wait, wrong movie franchise.

Terminator Genisys is never not visually engaging, whether you want to see the ridiculous action or you just want to see exactly where it’s going to go next.

The action is fun. Some of it riffs on scenes from earlier films – the T-1000 (Lee Byung-hun) is back, as is a younger version of Schwarzenegger’s Terminator – this time with really good de-aging CGI, unlike the atrocity that was seen in Salvation – and their scenes wind up playing out as different versions of the ones seen in The Terminator and Terminator 2. There are some chases, a couple too many robot-on-robot battles, and one or two perilous moments. Terminator Genisys is never not visually engaging, whether you want to see the ridiculous action or you just want to see exactly where it’s going to go next.

When there isn’t action, which is a rarity, we get some dialogue, which accomplishes one of three things: (1) Exposition attempts to explain to Kyle, the audience fill-in, why everything is what it is. (2) A terrible romance between Sarah and Kyle that is every bit as awkward, unnecessary (except for plot/time paradox reasons), and poorly written as most other obligatory romances. (3) Comic relief, mostly coming from Arnold Schwarzenegger. Terminator Genisys is the funniest Terminator movie to-date, and that actually helps its case. It’ll have you laughing more often than you expect, and not unintentionally; the laughs are intentional and genuine.

Our lead is Jai Courtney – something that should never happen. He’s not as bad here as he normally is, if only because he’s such a lackluster screen presence compared to his co-stars that he kind of fades into the background whenever he’s not the sole entity on-screen. It’s not his story, anyway. Emilia Clarke is charismatic and tough as Sarah Connor, taking over admirably from Linda Hamilton. Arnold Schwarzenegger, as an aging Terminator – “old, not obsolete” – is the best he’s been since … probably the third Terminator movie, actually. This is the role he was born for, and the best acting he’s ever done is as an emotionless robot. He gets the funniest lines, he can somehow still handle the action, and while I thought I’d hate seeing him as an old-looking Terminator, it works well enough and is explained away reasonably well.

Terminator Genisys is a busy, relentlessly paced movie that doesn’t really stop to let you think about the issues it has as it’s playing. It’s fun in the moment, but won’t exactly leave you with a whole lot once it finishes, and might frustrate you retroactively. It’s got plot holes, time travel issues, and a complete lack of depth – but its action, sense of humor, opening scenes, and two of its lead actors make it a passable movie. Does it hold a candle to the first two films? Of course not. But is it watchable? I think so. I enjoyed it while it was playing, even if it’s not going to stick with me for long. Terminator has been somewhat successfully rebooted. Let’s see where they go from here.

Bottom Line: A semi-successful reboot of the Terminator franchise with a silly story, lots of action, decent humor, tons of plot holes, moments of nostalgia, and too much wasted potential.

Recommendation: If you wanted to see a modern update of Terminator 2, or just want a passable Terminator movie, Genisys satisfies both of these desires.