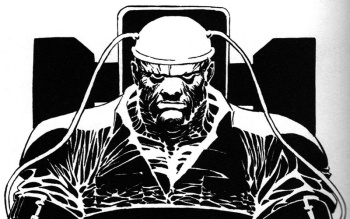 John Zuur Platten is a creative dude. Along with his partner Flint Dille at the Bureau of Film & Games, he’s responsible for the writing in a number of AAA titles, including The Chronicles of Riddick: Assault on Dark Athena, Ghostbusters: The Video Game, F.E.A.R. 2: Project Origin, Wheelman and the upcoming adaptation of Frank Miller’s Sin City. He’s also working with Vin Diesel on a script for Hannibal. But by his own definition, he’s no artist. Instead, he’s a craftsman.

Platten’s keynote at Day Two of the Triangle Game Conference was all about this dichotomy between art and craft. Titled “To Me, It’s a Table: The Craftsmanship of Creativity,” it offered solid, practical advice for anyone in a creative industry who struggles with the long process of bringing his or her ideas to fruition.

Platten’s central analogy was a sort of defense of games as commodities rather than manifestations of lofty artistic ideals. “Let’s say that you need a table,” Platten said. “So you come to me and you say, ‘John, we need a table.’ And I say to you, ‘OK, what do you need this table for.’ ‘Well, we need a dining room table and we want it out of wood,’ and I say, ‘OK, so far so good. How much are you willing to spend for this table?’ And you tell me ‘1200 bucks.’ ‘OK, good, I can do that for 1200 bucks. When do you need this table?’ ‘Well, we need it in four weeks.’ ‘OK, I can get that table to you in four weeks – sure, no problem.’

“Now, four weeks later, I’ll bring that table to you. We’ll put it in your dining room. It’ll do everything you want it to do. It’ll be functional, it’ll look good, you’ll have gotten it on time and on budget. And you might look at me and go, ‘Hey, John. This table’s beautiful – it’s a work of art!’ But to me, it’s a table.”

Platten wasn’t suggesting that games have no value as works of artistic expression. Instead, he merely wanted attendees to know the line of thinking that allowed him to break into the games industry in the mid-’90s and thrive there ever since. “You can be highly invested in the art that you create,” Platten said, “but if you aren’t willing to also be a little bit mercenary and be a little bit of a craftsman in the product that you create, you’ll drive yourself crazy.”

Platten then laid out the tools of his craft: an exhaustive 10-step process detailing how to transform an idea into a viable IP without going over budget or past your deadline. The first step is to study the subject that you’ll be writing about. Surprisingly, Platten said, many developers skip this step – they’ll start working on a military game without ever figuring out basic information like the hierarchy of the military, or whether the air force refers to a helicopter as a “helo” or a “chopper.” This step can be as simple as a Google search or as complex as actually diving into the world of your game (“If you’re writing a Western, go ride a horse,” Platten said), but it’s mandatory for creating a believable and engaging experience.

The next step is to actually document your thoughts on the subject. “I don’t want to spend six months thinking about the idea; I want to get some stuff on paper,” Platten said. In this phase of the process, the goal is to accumulate as much information about the subject as possible – photos, music and text alike. He advised the audience not to be too critical, but instead to paint in broad strokes. “The key thing is, you gotta get working” Platten said.

Once you have a rough sketch of the project, Platten said it’s time to step back and reflect on the work. What inspired you when you wrote it, and how did you connect it to your life experience? “Ultimately, we create stuff that we know,” Platten said. He referenced his client, Vin Diesel as an example: “Vin is a huge D&D geek … he’s also a huge World of Warcraft geek. The reason he became an actor in large part is because he loved being a dungeon master – he loved the process of creating and acting and going into this fantasy world, and so that led him to a place.”

From there, Platten said, you must distill your idea down to its essence and expand what’s left to compensate for it. He mentioned the rule of three: “Find three ideas that work, and make them work” – otherwise it’s too easier for the script to become muddled and confusing. More importantly, though, you need to be able to communicate the essence of your property with a one-liner. Platten mentioned talking with Frank Miller about a game based on his Sin City universe, and Miller elegantly summarized the setting in a single sentence: “In Sin City, people take a lot of killing.” From there, Platten was able to extrapolate that Sin City isn’t a place with much in the way of cannon fodder – “this is not a world where bullets mean that much.”

Optimizing the work means adapting your idea to suit its intended medium. “Who is your gamer/user/audience?” Platten asked. He also advised creators to embrace clichés, because they’re there for a reason. There’s an established language of game design tropes that it’s important not to overlook. “People default to crates and barrels because they work,” Platten said.

Platten recommended that writers bounce ideas off of each other to flesh them out. “Creativity is a contact sport. That means we’re going to get together, we’re going to roll this idea around and that’s how it’s going to be,” Platten said. It’s only through this back-and-forth that you learn what ideas are truly important to you – but that doesn’t mean you should cling to them. Platten recalled a moment while writing the third version of the Hannibal script for Vin Diesel where he became so attached to a key scene involving the death of Hannibal’s elephant that he couldn’t stand to alter it at Diesel’s request. ” At that moment, I was an artist and not a craftsman,” Platten said.

With all that legwork completed, you can start playing with the idea by mashing it up with other subjects. Here, Platten showed a pair of slides depicting equations for a couple of the most successful movies of the last 20 years. Martial arts + leather + guns + virtually reality = The Matrix, and more comically, Ferngully + Dances With Wolves + MechWarrior + 3D = a huge pile of cash to sleep on. Some of the best ideas, Platten said, are really mash-ups of existing ones.

The next to last step is to iterate by trimming away the ideas that didn’t pan out and polishing the ones that are left. “Revision is progress,” Platten said. He recalled that he had never once worked on a game that started with 15 levels and shipped with all 15. “More does not equal better – that is thinking from 15 years ago.”

And perhaps the most controversial stage in the process was the last one, which most game developers are intimately familiar with: the crunch. Platten revealed himself to be a proponent of the practice, but not in its soul-destroying, home-wrecking form. Instead, Platten views crunch as a challenge that lets you flex your creative muscles and improve as a craftsman in the process. He compared crunching to weightlifting, where the only way to make progress is to push yourself: “If you want results, you’ve got to feel the pain.”

At a glance, Platten’s approach to game development may seem overly clinical and rigid, but he’s not arguing for those in creative industries to divorce their emotions from their work. Instead, he’s simply suggesting that the studied, meticulous approach of a master craftstman may be more fruitful for game makers than the free-form, whimsical approach of an artist. In a way, it’s an attempt to demystify a process that can seem almost impenetrable to those outside of game development. You may not need a lathe or a belt sander to make the next Mass Effect, but you do need a blueprint – and Platten was kind enough to share his.