Tharsis developed and published by Choice Provisions. Released on January 12, 2016. Available on PC(Reviewed) and PS4. Review code provided by publisher.

Tharsis is a turn-based strategy game about the first manned mission to Mars where one of your stats is “Human Meals.” That fact sums up its tone and even its gameplay pretty well, really.

Ten weeks before the spacecraft Iktomi’s historic arrival on Mars, disaster strikes. A barrage of micrometeoroids ravages the ship, kills two of crew, destroys most of the food stockpile, and rudely interrupts the game’s tutorial. The voyage becomes a desperate struggle to keep what’s left of the ship together long enough to reach Mars in the face of an endless series of equipment failures and a crippling shortage of food. Meanwhile, the Iktomi starts receiving increasingly disturbing transmissions- not from Earth, but from Mars. Which is odd, since nobody is supposed to be there yet… 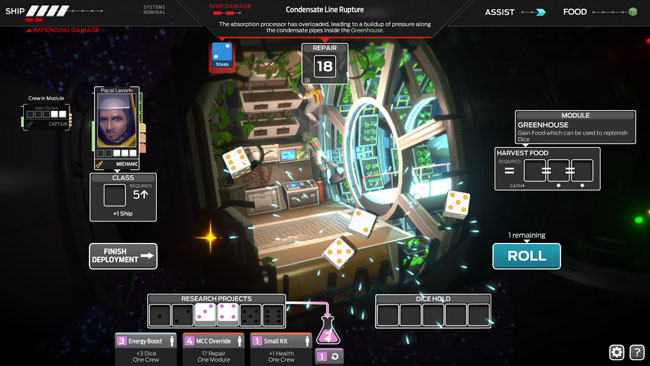 Tharsis is about resource management in circumstances of overwhelming scarcity. Each turn, you’re presented with new randomly generated disasters afflicting the ship, as well as whatever you didn’t finish fixing last turn. (And there will be stuff you didn’t finish fixing last turn). Each has an effect at the end of the turn if not stopped, such as damage to the ship or crew.

Each member of your crew can only do so much each turn, represented by their dice. You select a crewman, move them to the desired module, and roll. Each die can then be applied to reduce the module’s damage, or (if high enough) use the module’s systems or the character’s special ability to do things like heal injuries, grow food, or strengthen the ship. You can also put dice into your research points, which can be used to activate one-time benefits.

Rolling dice has risks. Every damaged module has at least one hazard- numbers which, if rolled, have negative effects like injury to the crew member or losing that die for the turn. Every time you roll a hazard number, it also increases that crew member’s stress.

Every turn, each crew member’s pool of dice decreases by one. You can replenish dice by giving them food, which is in short supply and requires a crew member in the greenhouse to get more of. Though there is another option….

The body of one of the crew killed in the meteoroid shower is still aboard. Frozen. Edible, if you need the dice badly enough. And if the crew suffers further casualties… Well, there’s no sense letting food go to waste in a crisis, is there? 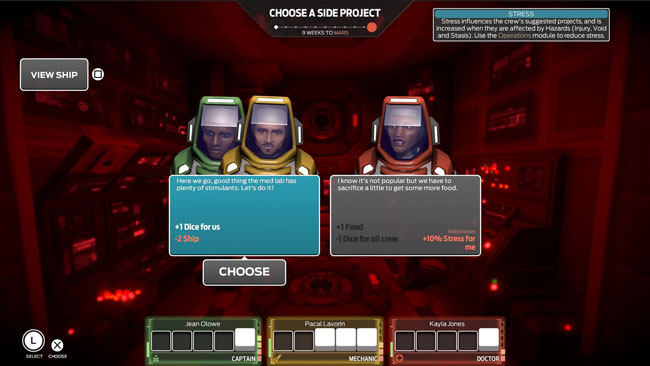 Tharsis’ wide array of options combined with its crippling scarcity of resources makes for an engaging, extremely tense strategy game. Your margin of survival is razor-thin, and you’re rarely more than a turn away from potential disaster. Even micro-level decisions about each individual die rolled require careful consideration and become nerve-racking after a while.

It’s a striking example of gameplay working together with story and atmosphere. The crew of the Iktomi is desperate, overworked, faced with appalling tradeoffs, and bombarded with crisis after crisis that pile up faster than they can be fixed, and so are you. The option of resorting to cannibalism is just an especially gruesome manifestation of the tone of the entire game – the situation is so dire that absolutely nothing can be spared.

You never have enough crew or dice to do everything you want. Not even close. I’ve allowed a radiation leak that would kill half of my crew on the next turn if not repaired to go ahead and kill them, because I had three other damaged modules that would destroy the entire ship if I didn’t fix at least two of them. Given the situation I faced, it was the right decision.

Presentation is adequate but nothing special. The different ship modules’ interiors are fairly detailed, though they’re always seen at a distance, and get old quickly. Still, I appreciated the developers taking the time to create a realistic-looking world for the game rather than going the minimalist route, which wouldn’t have served the atmosphere as well. Characters have animated portraits that, unfortunately, are not very well done. They get more agitated and squirrelly-looking as the character’s stress increases, which is cool in theory, but the animations are often too off-putting and awkward to be effective. I never felt invested in the characters as anything more than resources.

I did enjoy the fact that, once a character has engaged in cannibalism, their dice are drenched in blood and leave gory spatters when they roll for the rest of the game. You will never be allowed to forget what you did. I would have loved more little touches like that.

There are brief cutscenes with still images and voiceovers between turns that reveal the game’s story, which are simple, but well-voiced and visually evocative. The story itself is a creepy unfolding mystery that made me want to survive longer on every attempt so I could see more of it.

Tharsis’ strength leads to its biggest flaw, however. The game is highly random in the disasters generated each turn. It makes each run different, but often it pushes the game from merely very difficult to outright unfair. To some degree that’s inevitable in these sort of random-gen, no-takebacks games, but it’s especially glaring in Tharsis, where you’re always so close to the edge of defeat. Too often, when I contemplated what I’d done wrong after once again leading the hapless Iktomi to its destruction, the answer was, “Nothing.”

It’s only ten turns to Mars, so even if you die just short of victory the time invested is modest. Nevertheless, it can be very frustrating, and it was demoralizing to realize just how much my fate was out of my hands. Which is thematically appropriate, in a sense, but there is such a thing as gameplay and story meshing too well.

Despite that, I found the gameplay and atmosphere of Tharsis engaging enough to keep coming back for another try. It’s a brutal game that’s definitely not for everyone, but worth trying for strategy fans willing to absorb some punishment.

Bottom Line: A tense, challenging, and addictive strategy game with strong atmosphere, weakened by excessive randomness that too often pushes things past “hard” into “hopeless.”

Recommendation: Worth playing if you enjoy punishingly difficult strategy in a science fiction setting and can live with the prospect sheer luck screwing you over a lot of the time.