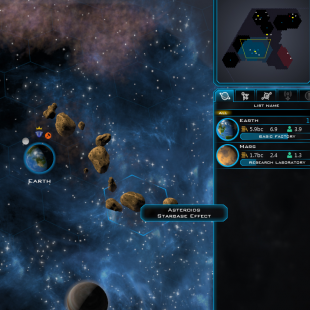 I’ve honestly lost count of the amount of hours I’ve sunk into the multitude of 4X games I’ve played over the years. The Galactic Civilization series has been one of them, as I’ve built (and destroyed) many a galactic empire with Galactic Civilizations II and its expansions. When the long awaited sequel Galactic Civilizations III was announced last October, I was absolutely stoked for the opportunity for more interplanetary exploration and exploitation, and along with Josh Vanderwall had the chance to check out the alpha build of the game this past week. While many features aren’t available yet (like the Ship Builder, which I know I’ll spend way too much time playing around with once it’s live), I did take special note of three particular features that I’m definitely excited to see in Gal Civ III.

The Presentation and UI

The first thing I’m super excited about in Gal Civ III is the general presentation of the game along with its user interface. The new right-hand sidebar has multiple tabs detailing information on the planets, ships and space stations under your control in an easy to access place, making it far simpler to see which planets are working on what project or where a particular ship is hiding – much more accessible than digging through Gal Civ II‘s various menus. Although some of the functions aren’t implemented yet, the symbols on the other tabs in the sidebar suggest that you’ll also be able to quickly keep track of your fleet’s rally points or other notable events in the galaxy. I’m really happy to see that the game is angling towards condensing the massive amount of information and data that comes with running a massive interstellar empire into something more easier to process.

Morality in GalCiv II was an interesting, but often ignored mechanic that just didn’t seem to function quite right no matter how many times I played the game. How it worked originally was that every now and then you’d have to deal with a moral quandary of some kind, from how to handle the native inhabitants on a planet you’ve just colonized or if you should sacrifice your own citizens to fuel an ancient supercomputer. Depending on which of the three options you picked, you could earn some passive bonuses to your empire’s stats, but it would adjust your empire’s alignment towards either good or evil, or if you varied up your choices, somewhere in the middle. An interesting idea for sure, but unfortunately, It didn’t do much other than affect some of your relations with your intergalactic neighbors, and until way down the tech tree when you actually completed a research assignment regarding ethical alignments would you get the option to pick an alignment permanently. This would give you additional empire wide bonuses, and in later expansions, unique ship weapons or planetary improvements, but I found way too often that the ethics-related equipment was obsolete compared to what I could already build via other tech trees. The system really didn’t have that much of an effect on how I progressed towards victory in the game.

With Gal Civ III, the three ideologies of being good, evil, or neutral now all come with their own “tech trees” that, as you earn more morality points and progress down the tree, offer their own bonuses and planetary improvements. But instead of being tacked down to just one moral alignment based on a handful of decisions you make in the early game that shunt you in one direction or the other, you can actually earn points for each of the three ideologies and potentially mix and match as you’d like. Supposedly, when this system is fully operational, it’ll allow your star empire to be, say, a middle of the road, diplomatically minded species with a slight nice streak, or a purely benevolent species that also happens to love enslaving its enemies now and then. I’m really hoping this is the case, as the concept of having more flexibility in how you guide your empire’s values versus going with a generic “Option A, B, or C” could really open up a few more ways to play the game. This will be especially important against other players once multiplayer is fully operational. 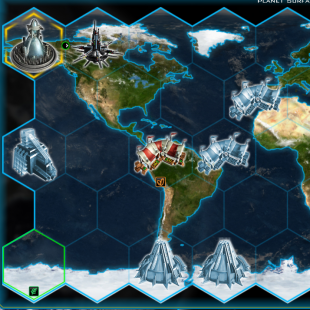 There are quite a few notable new additions to the general gameplay of Gal Civ III that shift around many of the elements we’ve seen in the previous games. One such example is how Gal Civ III handles planet colonization and management. Before, when you colonized a planet, you’d have access to several tiles where you could drop factories, research centers, embassies, etc, and occasionally some tiles held granted a specific bonus that may boost your influence or food production (provided you constructed the right building in that tile). But other than that, managing a planet’s infrastructure didn’t require a whole lot of effort – usually you could just click on buildings to have the game automatically place them in free tiles and leave it at that.

With Gal Civ III planets all come with a randomly generated hex map, and building placement becomes a much more important feature you’ll need to pay attention to in order to get the most out of your colonies. Many buildings now offer passive bonuses to neighboring structures, meaning if you place a few factories right next to each other, they’ll increase their output significantly versus if they were just on their own. The special tiles that granted extra boosts now offer more than one kind of bonus stat at a time, leading to instances where you’ll have to decide if you want a particular planet to produce extra research points or wealth. And since most planets rarely have tiles available in chunks, you’ll need to take a more careful approach to how you design your colony’s given layout – a much-welcome change that I feel will let players care a lot more over how their individual planets are run, especially in the grand scheme of a galactic federation.

In addition, the galaxy now has its own version of “terrain” that can affect and potentially how you fight your intergalactic conflicts. Although the only two phenomena present in Alpha are nebulae and dust clouds that reduce movement speed or weapon accuracy, digging through the galaxy creation menu hints that aspiring galactic emperors may have to deal with the likes of black holes and “interstellar rifts” (whatever those are) when planning out where to put their starbases or move their war fleets. It’s not the most massive game changing feature introduced, but I really like that it has the potential to really mix up some of the more strategic elements of the game.

As limited as the alpha of Galactic Civilizations III is right now, I can certainly see the potential it has to build upon the game mechanics of its predecessors and make a much more robust 4X experience. I’m definitely looking forward to see how many other features, like combat, custom races, diplomacy and any other nifty features that Stardock has yet to reveal, play out in the next version of the game. In the meanwhile, I’ll have to start making a list of ship names for when I get to dig my teeth into the new ship builder – How does the name “Friendmaker” sound for a battleship?