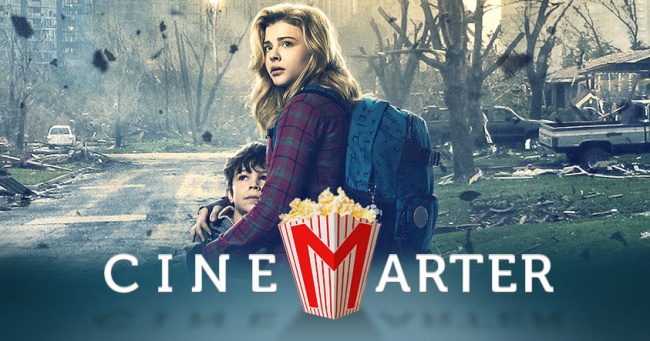 The 5th Wave feels like it’s a the pilot episode of a television show. I don’t mean that to insult TV; there’s a lot of good work being done on the small screen. I mean in terms of its format, plot, and what it ultimately accomplishes. It doesn’t have much of a self-contained story, and serves almost exclusively as a way to set up a franchise. The problem with that is that we’re given almost no reason to care about the project and, therefore, don’t have any desire to sit through any continuations. TV pilots are supposed to be good in order to hook the audience or convince a studio to order a full season. The 5th Wave wouldn’t even be worth watching if it was on network TV for free.

The majority of the plot paves the way for potential future installments which may or may not ever actually happen. If you’ve seen the trailer – which does a better and more succinct version of setting the stage – you’d know that aliens, nicknamed “the Others,” have come to Earth and have started wiping out all the pesky humans. They did so in waves: (1) electronic pulse, (2) flood, (3) virus, and (4) Invasion of the Body Snatchers. We’re in the fourth wave as the film starts. Remaining humans don’t know who they can trust, as the Others can infect anyone’s brain and control them. 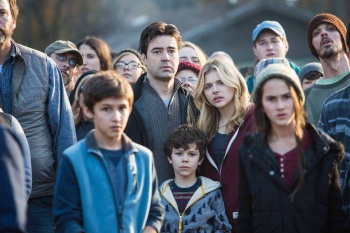 Our lead is Cassie Sullivan (Chloe Grace Moretz), a teenage girl whose father (Ron Livingston) gets killed and her brother (Zackary Arthur) gets taken by the Army, leaving her all alone in the middle of the woods. She wants to get to the Army base both for the purported safety, as well as to reunite with her brother. So, she spends the entire movie trying to do that. She eventually teams up with a farm hand named Evan (Alex Roe). It’s a long, slow journey.

Meanwhile, we also get to watch Cassie’s high school crush, Ben (Nick Robinson), at the Army base, leading a squadron of children, because children are now humanity’s best hope at killing the Others. Why? Because the Colonel (Liev Schreiber) says so. Something about infected children being easier to detect – it doesn’t matter. Ben’s storyline runs similarly to Ender’s Game, but without any of the in-squad politicking, interesting characters, or awesome sci-fi stuff.

The 5th Wave feels like every young adult movie of the last decade crushed up into a two-hour TV pilot.

Cassie’s story is … you name it. Much of The 5th Wave feels like an amalgamation of a bunch of various young adult adaptations from the last decade. More specifically, it’s the first 30 minutes of any number of these things, but stretched out to two hours, since it’s all setup. If you’ve seen those, you’ll know exactly where this film is going at any given moment. It has two big twists that you’ll figure out far too early. It’s setting up for a love triangle reminiscent of The Host. There’s no originality to be found here.

There isn’t even enough action to distract us from how bland and repetitive this all feels. There are maybe two action scenes – if you can call them that – and one of them is shot with such little light that it’s actually a struggle to tell who’s doing what to whom. It’s a surprise that a scene with this lack of quality would come from a director like J Blakeson, whose previous feature, The Disappearance of Alice Creed, was shot on a shoestring budget and didn’t even come close to suffering from that sort of problem.

We also have to deal with some very lackluster acting in The 5th Wave. Chloe Grace Moretz is proving time and time again that if she’s not given a very strong director, her performance suffers to a great extent. She’s sometimes painful to watch in this. Nick Robinson was last seen as a mopey teenager in Jurassic World, and now he’s a mopey teenager again, but is more noticeable because we don’t have dinosaurs to hold our attention. Alex Roe feels too old for the role he’s given here, but his emotionless acting is even more of an issue. Zackary Arthur is another annoying child actor who often looks like he hasn’t got much of a clue as to what’s going on. Even the adults, like Ron Livingston or Liev Schreiber, turn in lackluster performances. The only bright spot comes from Maika Monroe, here fitted with about 16x too much eyeshadow, who at least provides the film with a bit of energy in brief spurts. Granted, nobody’s given good dialogue to work with, but even the scenes without dialogue feature some pretty bad acting.

The 5th Wave feels like every young adult movie of the last decade crushed up into a two-hour TV pilot. After it faded to black, I expected “Coming soon to CBS” to appear on the screen. It’s all setup – building toward a sequel that we very well may never get. And even if we are “treated” with a second one, The 5th Wave is so dull that it’s hard to imagine many people caring. Bad acting, very little plot, no originality, and not even enough action or thrills to distract us from all its flaws, it turns out the potential extinction of the human race is so boring that we may as well end it all now.

Bottom Line: An uninspired film that feels more like the pilot of a 12-episode TV show than a contained movie, The 5th Wave is one of the worst young adult adaptations we’ve seen.

Recommendation: Even suckers for this sort of thing will notice how similar it is to all the rest of them.