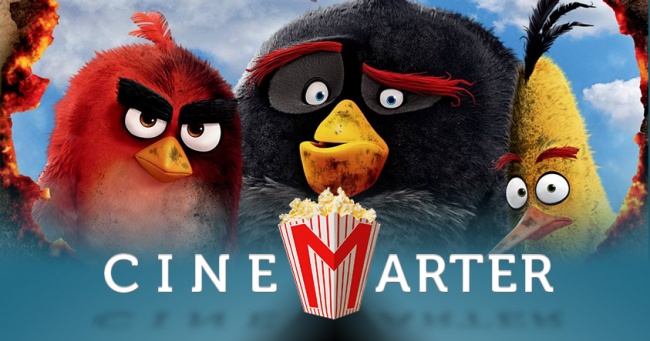 About four years too late and many, many brain cells too short, The Angry Birds Movie comes across like something that feels like a bad idea before you see it, and that feeling is only exacerbated after bearing witness to the final product. An adaptation of the video game series, kind of, the film is an exercise in boredom and bad puns. The only good thing about The Angry Birds Movie is it will remind you how precious every second of your life is. Watching an obese eagle urinate into a pond for 15 seconds is enough to make anyone re-evaluate what they do with their spare time.

If you’ve ever played the games, you’ll know that flightless birds are our heroes, green pigs are the villains, and the birds use a slingshot and magical powers to destroy the pigs’ various poorly built structures in order to take back the eggs that the pigs stole from them. That’s what happens for the last 20 minutes of The Angry Birds Movie. The first 3/4? We watch our protagonist, Red (voice of Jason Sudeikis), upset the other birds by sometimes getting understandably angry at their stupidity and gullibility. 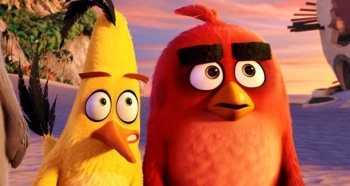 The birds live on an island and believe that its area is the entirety of the planet. So, when a bunch of pigs show up on their shore, their world view is shattered. The pigs have technology and country music! The birds embrace them warmly, but Red has his doubts. When the pigs betray them and steal their eggs, the birds have to rally together to get the eggs back. It takes a long time to get to this point, but we do, indeed, eventually get there.

None of this should be a surprise. What should be a surprise is how easily the movie could have been good. You’ve got a technologically advanced race coming to an island nation that’s eventually led (and therefore represented) by a red guy? Gee, I wonder why that sounds familiar. The filmmakers have no interest in exploring this parallel, however. Instead, we just have evil pigs and good birds and eggs and a slingshot. Because why try to elevate your source material when you can just put in the bare minimum and get away with it?

We got a moronic, pandering, cringe-inducing, and overall terrible movie that features almost nothing of value for anyone, and feels like a waste of its potential.

It’s a basic story that could be told in about half an hour. The jokes are cringeworthy, consisting of precisely no big laughs and only a couple of chuckles. Its characters are one-note nothings who are more annoying than endearing. They learn zip, they are zilch, and it’s impossible to care about their plight – which is not how you should feel about victims of theft, especially when the objects being stolen are unborn children!

About the only semi-positive – and mostly by comparison – aspects to The Angry Birds Movie are technical in nature. The animation isn’t especially good or noteworthy, but it’s serviceable. It’s certainly not, say, Norm of the North bad; it’s at least finished. And the cast that’s been assembled here is fine, as are most of their vocal performance. Jason Sudeikis is bland, Josh Gad is doing Olaf the Snowman on speed, Danny McBride plays the dumb Bomb, Bill Hader and Peter Dinklage are both simultaneously wasted and overacting to the max, and Sean Penn – yes, Sean Penn! – grunts for almost the entirety of his screen time. And, yeah, if I hired Sean Penn for an animated vocal role, I’m pretty sure that’s exactly what I’d have him do … if I wanted to waste money. You know what? I take it back. The vocal work isn’t even good enough to call it “okay.”

Some decisions are even weirder. The target audience for an Angry Birds movie should, theoretically, be in the 10-18 age group. Most of the jokes are aimed at under-6s. Maybe they’ll go just because it’s an animated movie with talking animals, but I doubt too many are going in as fans of the game – it’s a puzzle game, after all, and while not a truly difficult one, it’s not always easy. But then you get something like a reference to The Shining thrown in there, and you just have to question what the filmmakers are thinking. Nothing says “family-friendly entertainment” like references to a horror movie from 1980s. Instead of crafting jokes or coming up with themes for the adults, we’re going to try to entertain them with references. “Hey, remember this thing? It exists.” It’s just odd.

Angry Birds probably didn’t need to be a movie – the source material doesn’t lend itself particularly well to making one, and we’re at least four years removed from the games being a big deal – but the film had potential. With carte blanche for the story, themes, characters, and jokes, the filmmakers could have made something truly wonderful. Instead, we got a moronic, pandering, cringe-inducing, and overall terrible movie that features almost nothing of value for anyone, and feels like a waste of its potential.

Bottom Line: No better represented than by a fat eagle urinating into a pond for 15 straight seconds, The Angry Birds Movie will make you re-evaluate what you’re doing with your life.

Recommendation: Stay away! Stop it!