“The Balloonman” introduces Gotham to vigilantism and is the series’ most promising episode yet.

Gotham’s third episode is the first one that looks like this series could work. Where the first two episodes were caught up with introducing characters and concepts, “The Balloonman” succeeds in delivering a full story with closure while building elements for the seasonal arc. The show is still a victim of clichéd, cheesy dialogue and broken story elements, but everything else is good enough that those problems can be overlooked.

Unlike last week’s “Selina Kyle“, this episode doesn’t force characters and storylines together just to make it all seem connected. Gordon has his case, the world of organized crime is becoming less organized, and Bruce is chilling in Wayne Manor. Montoya and Allen, Major Crimes investigators suspicious of Gordon, are really the only element that moves across the stories, but at least it makes sense.

“The Balloonman” also delivers a full story with no “man behind the curtain” to be revealed later. It’s good to see Gotham can conclude a story, and while the episode totally cheated on solving the mystery (more on that later), the climax itself went an unexpected direction and worked thematically with the episode. The modus operandi of the antagonist may not be plausible, but tying your victims to a weather balloon to kill them certainly fills Gotham’s weird quota for the week.

The Balloonman himself serves as a message to the rest of the characters. The criminals and corrupt city officials begin to fear a city that cheers on a violent “hero” and they start to realize that the system could fall apart. From his home, Bruce Wayne watches and learns how to not be a vigilante and develops one of the most important core concepts of Batman — no killing. Gordon, on the other hand, sees through the Balloonman just how badly broken Gotham City is and begins to think he might be in over his head. 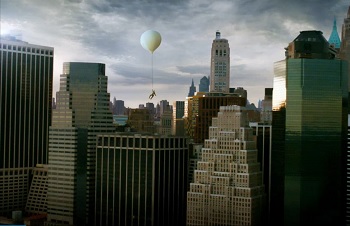 In the comics, there has always been a tension between Batman and Commissioner Gordon — Gordon is the person Batman would have become if he picked up a badge instead of a cape (paraphrased from an issue of Wizard I read over a decade ago). Batman works outside the system and deals mainly with the criminals — both mentally unstable and otherwise — but only after Gordon spends years cleaning up a dirty police department. They don’t work towards the same cause and how Gotham’s Gordon and Bruce interpret the Balloonman reflects their motivations in the comics.

The series also continues to succeed in showing fun new ways that the GCPD is corrupt. Beating suspects has been a recurring theme, but the first three episodes of Gotham have now shown police planting evidence, taking bribes, and stealing from drug dealers, respectively. Bullock, Gordon’s partner, is consistently an example of a dirty cop who might have been a decent person but has been changed by a broken system. This episode gives Bullock a moment to shine when he uses his unethical methods and questionable contacts to chase a lead.

Separate from the episode’s story, the criminal underworld becomes more unbalanced as Fish Mooney and Falcone continue their violent, manipulative game while Cobblepot rolls back into town (with an appropriate amount of bloodshed). The man who would be Penguin makes a new connection with an old Batman antagonist and the word “Arkham” gets dropped a couple more times.

Whether it’s in reference to the asylum or not, “Arkham” has been a keyword in the past two episodes. The Waynes were attempting to bring Arkham back, while Falcone and a new party are wrestling for control of it. It’s a safe assumption that next week’s episode, “Arkham”, will tell us for sure if the famed asylum from the comics is making a return.

Gotham airs Monday nights at 8/7c on Fox. You can also catch the new episodes on Fox’s website and Hulu. Spoilers ahead, including the reveal of the Balloonman’s identity because it needs to be discussed.

Gordon is starting to realize just how much danger he is in. He may have successfully convinced Bullock that he killed Cobblepot, but Gordon’s partner is still willing to remind him that the new detective could be next to be executed. The rest of the department doesn’t exactly trust Gordon either, whether they think he’s a “boy scout” or a thug.

Detectives Montoya and Allen, from the Major Crimes Unit, try to put some pressure on Gordon after Fish Mooney points them his way. Gordon doesn’t crack, but there’s a Shakespearean frustration to watching these cops clash. They all want the same thing, and if they could just communicate it would all work out, but then we wouldn’t have a series.

We also wouldn’t have the electric scene in which Montoya tries to warn Gordon’s fiancé that her beau might be a cold-blooded killer. The past between Renee Montoya and Barbara Kean has been hinted at before, but now Barbara’s history with drug abuse and the nature of their relationship has been revealed to viewers. It doesn’t seem that Gordon knows Barbara was romantically involved with Montoya, and it seems like some of those feelings remain between the two.

Fans of Montoya in the comics are likely happy that Gotham’s Montoya remains true to the source material in regard to her orientation. After the changes to John Constantine for NBC’s upcoming series, it’s a bit of a relief that Fox didn’t make the same call.

Why did Mooney send MCU after Gordon? Because at the same time she’s able to namedrop her boss, Carmine Falcone. Mooney is making moves to take over Falcone’s operation, and including having his lover attacked in retribution for the crime boss having her romantic partner beaten. It’s not about the love interests, of course. Mooney casually orders for the execution of her lover at the same time. All these moves and plays are just about hurting each other.

Falcone doesn’t need the grief, though. Thinking he had “Arkham locked down”, he reveals to Mooney that his biggest opponent, Salvatore Maroni, is making plays to take over the deal. Classic Batman Maroni is introduced this week, and the up-and-coming crime lord takes notice of a new dishwasher in a restaurant he frequents — Oswald Cobblepot.

Cobblepot, after his failed ransom (what happened to the victim?), returns to the city that is his “destiny” with a couple bodies in his wake. After getting a job to kill for (sorry), he places himself in the restaurant and catches Maroni’s eye as someone smart enough to know what’s up, and wise enough to shut up. Being at Maroni’s side is probably the best place for Cobblepot as he plans on taking advantage of the war only he can see coming.

The show smartly cuts Bruce Wayne entirely out of the main story. Up at Wayne Manor he watches the happenings in Gotham City on the news while obsessing over his parents’ murder. Alfred does better as a parent-figure, encouraging Bruce to eat and even engaging in a little play sword-fighting (the music during this sequence is a great call-out to the adventure movies that inspired the Batman character). Bruce establishes his “No Killing” rule in this episode, in reaction to the Balloonman, but at this point I have to wonder if this trend of building Batman every episode will continue. If it continues at this pace, we might see a young Bruce sneaking out and traversing the rooftops of Gotham before the end of the season.

The episode still has its issues with a poor script, but the delivery of almost every line is fantastic. Still, while the plot holes before have been fairly minor, the show takes a cheap shortcut that is just terrible in this episode. Gordon and Bullock do all this work to hunt down the Balloonman, but it’s literally reduced to Gordon recognizing a piece of paper he signed found on one of the victims.

He immediately knows that the vigilante is the social services worker that accompanied Selina Kyle early in the episode. While believable and plausible, there is no reason for the audience to remember the character or think of him as anything important. Overall, this is forgivable compared to the how improved this episode is over the past two, but it is frustrating nonetheless.

Bottom Line: This is the first episode of Gotham that tells me this show could have some staying power. It’s exciting enough to be its own story and ties in the longer story arcs without feeling forced.

Recommendation: The show still has its problems, but now that Gotham has proven it can tell its own stories, this is something to worth watching each week.

Final Fantasy VIII‘s Gunblade Gets the Man at Arms Treatment