While I refuse to spell Iphone with a small I and a capital P like you’re supposed to, for some time now I’ve become more and more convinced that it, and platforms like it, are a vital part in this, the puberty of gaming’s ongoing development. As gaming continues its long struggle for acceptance alongside other mainstream entertainment, iPhone games, as well as budget Steam and XBLA releases, are the short snacky time consumers that complement the big ten-hour current-gen bum-numbers. They’re the quickie magazine articles to triple-A gaming’s full-length prose novels, the ten minutes of TV you watch to pass the time as the wife gets ready to go out to the movies. Women, eh, fellas?

The Iphone’s virtually unique one-touchscreen no-buttons nature also means that games are basically forced to innovate in their controls and design. A lot of publishers have simply tried to port old 2D games like Sonic the Hedgehog or the first Prince of Persia, but they don’t translate well to the format. Innovation is what gets rewarded, because if the download charts are anything to go by, there’s absolutely no style of gameplay that’s guaranteed to sell well. The top 25 contains shooters, physics puzzlers, platformers and whatever the hell you’d classify that Where’s Wally thing as.

In the video, I made the point that the Iphone market is great for indie developers, and then went on to needlessly give exposure to four really popular games that have already made their creators an absolute bomb. So, to re-embrace the indie spirit, I’d like to add some additional reviews of less known Iphone games that have been known to take up a lot of my time.

For years now I have searched in vain for a game I played on my Amiga many years ago called Hydrazone, which I think I found on a magazine cover disk. The point of Hydrazone or whatever it was called was to fly in first person down a long corridor while moving up, down, left and right to avoid the various geometric shapes coming towards you. I remember it being fast-paced and exciting to the point that I’d reflexively bank in my chair when obstacles flew up out of nowhere, but I’m probably seeing it through a nostalgic filter. Searches for it have been fruitless, but I stumbled upon iTunnel 3D while searching for “tunnel” in pursuit of something similar, and it’s probably the best of the handful I found that ran along these lines. Several levels are available with some nicely creative variations on gameplay, such as the memory level that has you repeatedly navigate two identical corridors of obstacles, the second one plunged into pitch blackness.

Once a popular PC downloadable game also called Porrasturvat, Stair Dismount has gained quite a few bells and whistles on the way to the phone. Technically, one might call it a “physics puzzler,” a genre which badly needs to be split into more specific sub-headings. A ragdoll stands at the top of a flight of stairs, or a tree, or an electricity pylon, and the objective is to shove them off with precisely the right angle and power to do the maximum amount of damage to their body on the way down. Very cathartic at times, and you can even paste the photo of someone you don’t like onto your ragdoll’s head if you’re the most passive-aggressive cunt in the universe. Like many Iphone games, though, Stair Dismount has a rather nasty habit of nickel-and-diming you for its content, with additional characters and levels available only through a couple of additional dollar payments. Which never seem like much, but they have a tendency to mount up, and the next thing you know you’ve bankrupted yourself because you wanted to break the legs of something with tits. 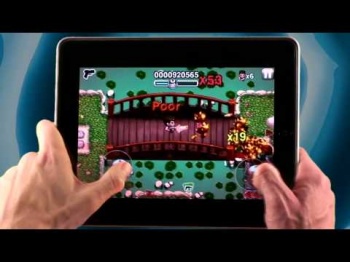 Oh ho, another game by by Brisbane-based buddies Halfbrick, eh? How little shame do I have? Truth is, while AoZ‘s intense and entertaining top-down zombie swarm fighting keeps me coming back to beat my high scores, I bring it up mainly to make the point that I’ve played a lot of bad Iphone games that devote large chunks of screen real estate to virtual buttons. This is a bad idea. Firstly because it means covering up a lot of the action with the player’s big manly thumbs. Secondly because buttons that lack tactile feedback (ones you can’t feel going in and out, like the godawful power and eject buttons on the older, fatter PS3) feel unnatural and frustrating when you can’t immediately tell if your finger is on the button until the enemy you’re trying to shoot cracks your head open like a breakfast boiled egg. And thirdly it feels like a cop-out, like they’re not adapting to the format – this is why ports of old games like the aforesaid Prince of Persia don’t work out too well. I’ve seen Iphone games with quite ridiculous numbers of virtual buttons clogging up the screen. AoZ pulls them off about as well as possible by placing the virtual analog sticks wherever you first plonk your thumbs down, but it’s still not ideal.

While there isn’t any golden rule for gaining popularity when developing handheld games, being cute certainly seems to help. ToD is fairly unremarkable, however, it’s just a functional see-how-far-you-can-get avoidance game, but there is one thing it does that I very much appreciate: After you’ve clocked up scores of a certain magnitude, such as 1000, 2500, 5000, etc, then in all future games you can actually start on that amount. It’s a good idea for games with a rising difficulty curve like this, it saves having to claw tediously back up to that point through the easy, earlier sections, and I wish I saw it more often. That’s all.

For some reason I get a kick out of swinging physics in games. I first discovered this while playing the 1989 Spider-man DOS game and since then I have sought out the best swinging experiences in gaming. Swinging carries a primal sort of entertainment for me. I went to a swinger’s party once under a misunderstanding and my grappling hook earned some very suspicious glances.

On the Iphone, there’s a popular free game called Mr. AahH!! (If I’m spelling it correctly) that is swinging refined down to nothing else, but it’s a little slow-paced. Hook Champ is my favorite that I’ve found along this theme because it emphasizes level exploration and speed swinging. If you don’t hurry the fuck up, you get eaten by a giant floating skull. That’s the kind of motivation I like to see. Rocketcat have another, similar game called Super Quick Hook that I don’t like as much because it omits the chasing skull threat, and I’ve seen exploded McDonalds restaurants with better-designed menus.