Although it’s commonplace nowadays to assume that J.R.R. Tolkien’s The Lord of the Rings was the primary source of inspiration for Dave Arneson and Gary Gygax when they created the world’s first tabletop roleplaying game, Dungeons & Dragons, a careful examination of the game suggests otherwise. There’s no question that Tolkien’s work did influence D&D. The earliest editions of the game included explicit references to Hobbits, Ents, Balrogs, and Nazgûl, for example – at least until the Tolkien estate threatened legal action, a fact that probably encouraged Gygax to downplay the influence of the Oxford don in later years.

Still, it’s interesting that the game’s original foreword, which Gygax penned in November 1973, long before any legal concerns entered into the picture, states: “These rules are strictly fantasy. Those wargamers who lack imagination, those who don’t care for Burroughs’ Martian adventures where John Carter is groping through black pits, who feel no thrill upon reading Howard’s Conan saga, who do not enjoy the de Camp & Pratt fantasies or Fritz Leiber’s Fafhrd and the Gray Mouser pitting their swords against evil sorceries will not be likely to find DUNGEONS and DRAGONS to their taste.” There’s no mention of Tolkien there and indeed, even with the aforementioned references to Hobbits and Balrogs and the like, there are probably even more references to the Martian creations of Edgar Rice Burroughs in the text of the game itself.

So, if The Lord of the Rings wasn’t as influential in the creation of D&D as some would have it, then what were the most significant literary inspirations for the founding game of the hobby of roleplaying? Let’s first take a look at the ones Gary Gygax specifically mentions in his foreword.

Although perhaps best known for creating Tarzan, Burroughs also created John Carter, a Civil War veteran who, by means of astral projection, journeys to the planet Mars – or Barsoom, as it is known by its inhabitants – where he wins fame, power, and the love of the incomparable Dejah Thoris, princess of the city-state of Helium. The Barsoom novels were hugely influential in the development of both later fantasy and science fiction. Gary Gygax famously sent a character from his home campaign to Barsoom as a result of a cursed scroll and Barsoomian monsters figure prominently in the game’s earliest wilderness encounter tables.

REH barely needs an introduction. The creator of Conan the Cimmerian, along with Kull of Atlantis, Solomon Kane and many more memorable characters, Howard almost singlehandedly created the genre we now call swords-and-sorcery. Contrary to the caricatures, Howard’s best stories deftly mix daring adventures with an almost existentialist philosophy. His characters, including Conan, are not muscle-bound blockheads but intelligent men whose dangerous endeavors offer surprising insight into the human condition. Even so, Conan is out to make a name for himself in the world and makes a great model for many D&D adventurers.

Both L. Sprague de Camp and Fletcher Pratt had written fantasy and science fiction stories separately, but it was their collaboration on the Enchanter stories that most influenced D&D. These stories introduce a psychologist named Harold Shea who, by means of an unusual system of symbolic logic, is able to transport himself and his companions into parallel worlds. These worlds all have different physics from our own, including working magic, and usually bear a close resemblance to those of mythology, such as Norse, Irish, Finnish, etc. — just like many D&D settings.

In his youth, Fritz Leiber was a correspondent of H.P. Lovecraft and many of his fantasy tales show a definite Lovecraftian influence. Leiber’s most famous creations are Fafhrd and the Gray Mouser, a pair of roguish adventurers whose exploits in the City of the Black Toga, Lankhmar, adeptly combined derring-do and naked self-interest. Fafhrd and the Gray Mouser are thus prototypical D&D characters, willing to undertake all manner of foolhardy tasks to keep themselves in wine, women, and song. Interestingly, Leiber designed a boardgame based on his Lankhmar tales, which TSR, the publisher of D&D, published in 1976.

While these five authors are the only ones mentioned by name in the 1974 edition of Dungeons & Dragons (along with Tolkien, whose name is consistently misspelled as “Tolkein”), they’re not the only ones whose writings influenced the game. According to an appendix to his 1979 Dungeon Masters Guide, Gygax notes that the authors having “the most immediate influence … were probably de Camp & Pratt, REH, Fritz Leiber, Jack Vance, HPL, and A. Merritt.” Several of those names were already mentioned in the original foreword to the game, but several are new. 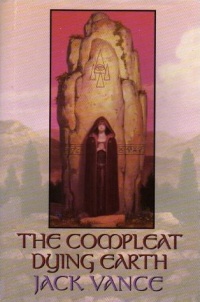 Of the many short stories and novels Jack Vance wrote, it was his 1950 collection The Dying Earth and its 1966 sequel The Eyes of the Overworld, that had the most influence on D&D. Set in the impossibly far future, when magic has returned and the sun is sputtering its last rays of light, these books introduce a peculiar form of magic that depends on imprinting spell formulae on the mind of a wizard, who immediately “forgets” them after use – the very system D&D adopted. Indeed, D&D borrows many spells and magical artifacts from these books and the protagonist of The Eyes of the Overworld is, along with Leiber’s Gray Mouser, the prototype for the Thief character class, first added to the game in its first supplement in 1975.

Like his contemporary, Robert E. Howard, H.P. Lovecraft needs little introduction. His “Cthulhu Mythos” and the cosmic horror it embodied have proven enormously influential in the decades since his death in 1937. Lovecraft was unique in his time for combining a Gothic literary sensibility with a philosophy that downplayed humanity’s importance in the universe. Though Lovecraft’s worldview is in some ways antithetical to that presented in D&D, many of the game’s monsters are clearly inspired by his stories, most notably the octopus-headed mind flayers and the ichthyoid kuo-toa, which recall Cthulhu and the Deep Ones, respectively.

Largely forgotten today, Abraham Merritt was a giant of early fantasy and science fiction. H.P. Lovecraft thought highly of his stories, as did SF pioneers Jack Williamson and Walter Shaver. Merritt’s works often involve ancient but advanced races that dwell beneath the earth or in inaccessible locations, whose horrific societies and cultures are stumbled upon by people from the surface world – sounds like the set-up for many D&D adventures, doesn’t it?

Anderson was equally at home in fantasy and science fiction. His historical fantasies, most especially Three Hearts and Three Lions, were hugely influential on D&D. Its protagonist, Holger Carlsen, is the main model for the game’s Paladin character class. Likewise, D&D’s regenerating troll and fairy swanmays owe their origins to this book. Even more significantly, Anderson’s conception of an eternal struggle between Law and Chaos inspired British author Michael Moorcock, whose own stories of Elric of Melniboné would in turn inspire the earliest versions of D&D’s alignment system.

As you can see, no single author or novel is the sole source of inspiration for Dungeons & Dragons. Instead, its origins are multifarious, with many books providing the raw materials from which Arneson and Gygax crafted the game that changed the world.

It’s unfortunate that so many of these books and authors today are largely unknown except to aficionados of early fantasy and science fiction. It’s my hope that, by bringing these authors to wider public knowledge, more people might not only recognize the debt that the hobby of roleplaying owes to their remarkable imaginations but also enjoy their writings in their own right. Like D&D itself, whose influence extends far beyond tabletop roleplaying games, these writers and their ideas contributed much to contemporary popular culture and they deserve their due.