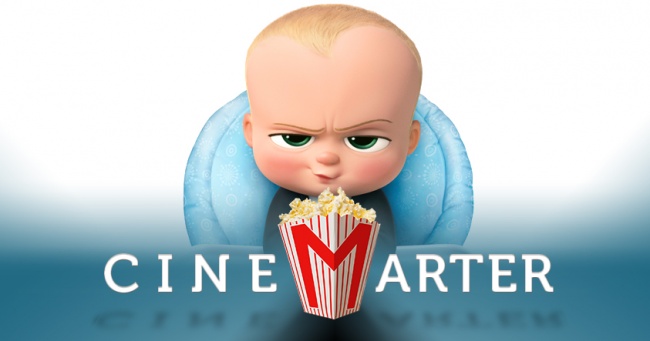 The Boss Baby, somehow conceived and created by adults, imagines a world in which babies are created by a corporation, classified at creation as either a normal baby or a corporate baby, and then either get to live out regular lives or immediately enter the company workforce. We learn all that as the opening credits are being shown on the screen. That’s an interesting scenario until you give it a modicum of thought, but this movie is for children under the age of four, so throw that thought out the window; it doesn’t belong here.

The story follows a baby (voice of Alec Baldwin), who is sent to the home of the Templetons. There’s a mother (Lisa Kudrow), a father (Jimmy Kimmel), and a seven-year-old (Miles Christopher Bakshi), who is our protagonist. The parents work for Puppy Co., and that’s apparently the babies’ main competitor so he’s dropped in to find out what new puppy is being developed for his superiors. He’s found out by the other child, they fight, then they team up in order to sabotage Puppy Co. – because if the Baldwin baby fails, he’ll have to live with the Templetons forever. And neither one of them wants that. 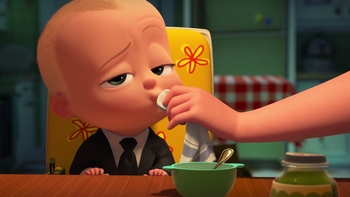 Basically, two characters have to team up to defeat the “evil” Corporation – whose goal is making people happy, the heartless monster – in order to never have to see each other again. If you guessed that they’ll grow to like one another as the movie progresses, congratulations: you have, previously, probably, in the past seen a movie before. If you didn’t, you are four years old and aren’t reading this review.

It’s the most basic of plots with an absurd setup – which winds up being the film’s only hook. The idea, at its core, isn’t bad. After all, when babies are born, the world essentially winds up revolving around them and their needs; everyone else falls by the wayside. The film dedicates about ten minutes to that very premise, as shown by our seven-year-old – I think his name was Tim. That almost works, except that it has one key problem: Tim is an awful character and an even worse human being.

This is a spoiled brat of a child who demands his parents read him multiple stories and sing a Beatles song to him every night. The type of kid who was seemingly never denied anything – whose parents dedicated all of their spare time to him and who isn’t emotionally stable enough to handle anyone taking time away from him. This is someone who, after knowing his new “brother” for less than 24 hours, tries to murder him. And not in a fake, imaginary, “we’re playing cops and robbers” kind of murder. The film has sequences where he imagines things and it’s played out in a fantasy land without consequences. No, this is in its real world. He tries to kill the baby. Even getting over the fact that this is a movie for children, it’s not exactly endearing of a character to be so selfish that he wants to do that.

Those fantasy, imagination-based scenarios actually could have given the film a unique twist – that this whole “boss baby” concept is the way that this child is dealing with the introduction of a new member to his family. It would allow for social commentary, explain the illogic to most of its proceedings, and allow the film to go in even crazier directions. But that might require a modicum of thinking, so throw that out the window with the earlier thought you tried to apply to The Boss Baby.

I guess, though, if you did that, you’d have to throw out all of the film references and “adult” “jokes” that are scattered throughout – added in just to make sure the parents who brought their infants to the film are still awake (they won’t be). That “cookies are for closers” line from the trailers isn’t something that a kid’s going to get – it’s there just for the parents, making them remember a time when they were watching a much better movie. That’s what happens when bad movies reference better ones, at least for me: I think about how I’m wasting my time on this when I could be watching something that doesn’t make me hate the medium.

At least Alec Baldwin puts a semblance of energy into his performance – this isn’t another Kevin Spacey in Nine Lives role. He’s about the only one, though. The other adult performances in the movie – Steve Buscemi, Jimmy Kimmel, Lisa Kudrow, and Tobey Maguire (who narrates) – all sound like they’re bored out of their minds. Miles Christopher Baksh struggled with word pronunciation, but I wager that’s because seven-year-olds can struggle to do that. He’s emotionally flat in the role outside of that.

If cookies are for closers, The Boss Baby not only doesn’t deserve a cookie, but it owes each member of the audience multiple cookies for making us sit through its unfunny, pointless, annoying, and boring nonsense, all while being a blandly animated movie. It has all the drama of a Bellas feud and all the laughs of a baby waking you up at 3 AM. Most kids deserve better than this and adults most certainly do. It’s a potentially interesting premise wasted – a 90-minute bee sting to the tongue.

Bottom Line: Like listening to a baby scream and cry for 90 minutes, The Boss Baby feels like torture.

Recommendation: The Boss Baby should have been aborted in utero.

How Developers Extend the Life of Their Games