Developed and Published by Awfully Nice Studios. Released on January 19, 2016. Available on PC.

If you grew up playing games in the ’90s, there’s a good chance you might’ve played, or at least heard of, Super Pang (also known as Super Buster Bros.), a Capcom arcade game that played a lot like Breakout and Space Invaders. It wasn’t quite as well known as those two games, but it was a fun title that really mixed up the “shoot upwards while dodging enemies” formula. 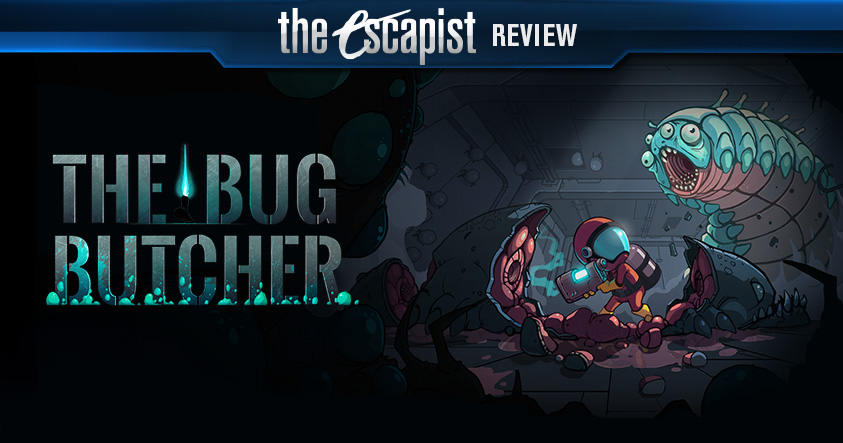 Enter The Bug Butcher, a modern take on Super Pang that offers some new twists and a seriously gorgeous art style that wouldn’t look out of place on Adult Swim. Bugs explode in satisfyingly visceral fashion without being gory or off-putting. And the game has a catchy electronic soundtrack that goes along well with everything else it has to offer in terms of presentation. It’s an eye-catching game that sounds good, but how well does it play?

As the title implies, you play the role of a pest exterminator called into a science facility where giant mutant bugs are wreaking havoc and infesting everything from top to bottom. Unlike regular extermination services, you won’t be able to fumigate the whole place and cover it under a tarp–this is a job that requires some hands-on bug butchering.

Many of the game’s 30 levels offer a variety of stage hazards and obstacles, where several waves of enemies spawn in predetermined set-ups. There’s a wide variety of enemies aside from the bouncing bugs that explode into smaller bugs. The game really mixes things up with the addition of facehuggers that launch themselves at your head, ceiling-crawling barnacles that threaten to devour the scientists you have to protect, and giant boss-like bugs that can take (and dish out) serious damage. It all feels a bit like Half-Life with a creative cartoon twist, minus the plot and with a gun that only shoots upward. Every enemy has a distinct move pattern and set of behaviors, which they telegraph. I got the hang of the harder enemies after they ate my face at least half a dozen times each. Given the predictable spawns and enemies, it seldom felt like I was being thrown a curveball. If I died, it was because I messed up. In this regard, The Bug Butcher rewards repeat playthroughs.

Having quick reflexes, good coordination, and some memorization can only go so far. Power-ups are the only things you can’t predict, which helps keep an element of randomness in the game. There’s no bigger relief than getting a health powerup when you’re almost dead or detonating a freeze bomb to make a hectic situation manageable. That said, I never encountered any situations where I needed a power-up to beat a level.

Beyond transitioning from level to level in Arcade Mode, you can upgrade the temporary power-ups and the default gun with the coins you get from killing bugs, and the end-of-level bonus for achieving a high score. The upgrades are fairly basic and linear, increasing the amount of damage you do and the duration of your powerups. There are also three suit upgrades to choose from that reduce the overall difficulty of the game.

Outside of Arcade Mode, there’s Panic Mode, which you can play alone or with a friend on the same computer. In this mode, you have to shoot endless waves of enemies until you run out of time or die. You can pick up time extension drops to extend your score. It’s also possible to pause the game to purchase upgrades with the coins you accumulate from killing enemies. I didn’t enjoy this mode as much as the main levels, if only because I couldn’t predict where enemies came from and which ones spawned–but that’s a thing that really comes down to personal preference.

Bottom Line: I went into The Bug Butcher with few expectations, so I was pleasantly surprised by how well the classic arcade mechanics held up to today’s standards. It’s a challenging game that never feels cheap or unfair.