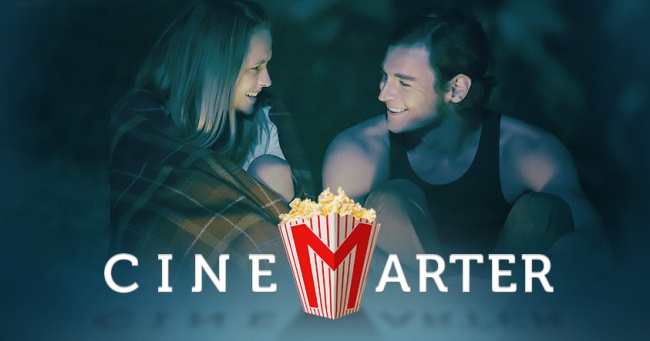 2016’s iteration of a Nicholas Sparks film comes in the form of The Choice, possibly the worst of these things yet. The setting is, once again, a town in North Carolina. The third-act tragedy is a car crash. The plot sees two people who will eventually fall in love try desperately to not fall in love. There are boat rides and stargazing moments. Is there anything else you need to know? It’s the same movie over and over again with only minor details changed, and in this case the minor details make it come across as one of the least engaging entries in this tired canon yet.

Our lead is a vet named Travis (Benjamin Walker) who lives on a lake, has a couple of married friends, and is apparently the most interesting and attractive male ever, according to everyone in the film. A medical student named Gabby (Teresa Palmer) moves in next door in a house whose walls are so paper-thin that it’s astonishing to find out that it’s managed to remain standing for more than a minute. She hates how loud he plays his music, she hates his “charm,” and she hates his dog for impregnating her dog, even though his dog was neutered several months earlier. 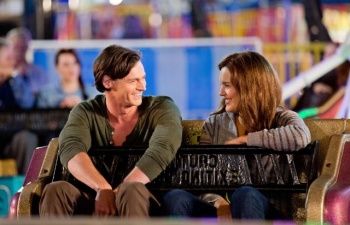 But, really, she loves him. Why? Because of reasons. Reasons that the film won’t bother explaining. He loves her, too. Again, the “why” is never really explained. They’re made for each other because the film demands it. Both of them are in relationships already, but that doesn’t matter. What a surprise it is when her beau leaves on a business trip that our two leads finally get together, declare their love for one another, spend something like a month enjoying each other’s company, and then break it off when the boyfriend returns. Why? It, once again, doesn’t matter. Nobody in the film acts with any semblance of logic or consistency.

Many of the scenes in The Choice are so cringeworthy that I wouldn’t wish anyone to see them. A couple of them stand out. One involves a character being goaded into lying to a child. Why? Because the film tells us that lying to children is a good thing – using the “Santa Claus” example as a reason to ignore telling the child her pet died, because those two things are totally relatable. Another one sees everyone in a room try to convince Gabby that she needs to marry a guy she hasn’t seen in a month. Over and over they go, all the while she retorts “no,” or “I’m standing right here!” But she eventually caves into the peer pressure, because she really, really, really does love him, remember, even if she wants to deny it. It’s even creepier when you recognize that two of the people trying to convince her to marry the guy are her parents who previously had never met him.

The Choice is trash. It’s one of the worst Nicholas Sparks adaptations.

The Choice also suffers from the issue that many of these things do, where the main plot is resolved, but then it keeps going on, throws in tragedy, and then solves that tragedy perfectly so the audience will weep happy tears. The Longest Ride was one of the better Sparks adaptations until it did exactly this. The Choice, meanwhile, is awful throughout, and then drags on with this emotionally manipulative garbage at the end. It even goes so far as to try to hide the outcome from the audience – attempting to generate suspense – but it’s so predictable that not even a child would fall for it.

In order to believe in a romance, the writing needs to be good and the actors need to have at least a bit of chemistry together. It’s a Nicholas Sparks adaptation, so you already know that the writing is terrible. But good actors can make a bad script look golden. Unfortunately, neither of the leads in The Choice are any good. Benjamin Walker delivers a dramatic performance worse than his work in Abraham Lincoln: Vampire Hunter – which isn’t a drama. He’s not charismatic, charming, or interesting. Teresa Palmer is equally bad. Together, you continue to wonder why they’re falling in love at all, since they simply don’t show it. They’re forced to act without reason a lot of the time, so it’s hard, but even scenes of just the two of them pretending to care about each other feel fake.

The Choice is trash. It’s one of the worst Nicholas Sparks adaptations. All of the expected elements are there – these things are all just slight variations on several key ideas anyway – but the details make it almost unwatchable – and it’s not a short movie, either, clocking in at 110 minutes in length. Bad acting, terrible scripting, uninteresting direction with a few baffling and uncomfortable moments, and emotional manipulation up the wazoo lead to one of the worst theatrical experiences you can have. Moviegoers? You do have a choice. And that choice should lead you away from this film.

Bottom Line: Garbage from start to finish, The Choice is the worst Nicholas Sparks film yet.

Recommendation: Just go re-watch The Notebook – still the only passable version of this.