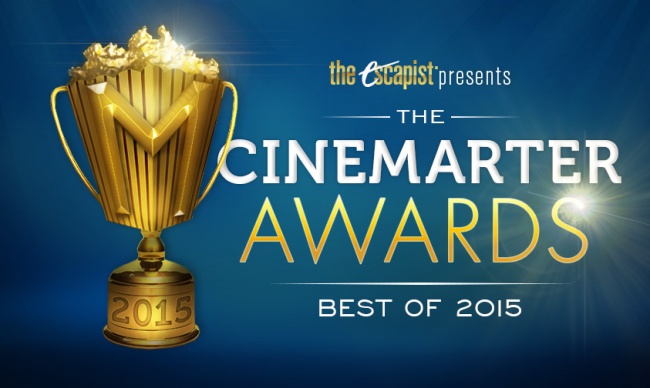 As I’ve mentioned before, 2015 was an odd year for film. Its great films were really special, but its worst films were abominations. This makes creating lists difficult, since there’s just so much from which to choose. Narrowing categories down to just five nominees is difficult any year, and in 2015 it became even more difficult. However, that’s exactly what various awards aim to do. You know how these things work, so without further ado, here are the CineMarter Awards for the best of cinema from 2015.

If you wish to travel to a specific award, just click the title of the award (if you have multiple pages; if you don’t, you’ll have to scroll down). Otherwise, browse through by clicking “Next” at the bottom of the page.

Best Use of a Song in a Film

The category that arguably the most people care about, the Best Film of 2015 was one I thought was locked up early on this year, only for a film that came later to surprise me. And then another film. And then another. 2015 had more than five viable candidates. It may have had more than ten! The top films of the year were genuinely really great; there’s no Extremely Loud and Incredibly Close this year.

Ex Machina is a modern sci-fi masterpiece. Inside Out is arguably Pixar’s best film ever. Mad Max: Fury Road is a reminder that even junky action movies can have a brain and a heart. The Martian is everything Interstellar wishes it was. And Spotlight is a perfect film, even though it’s not flashy. What a year.

The Best Director award is one that’s always hard to give out. It’s easy to give it to the director whose movie won Best Film, since theoretically that film should also be the best directed. But there are times when that’s not the case. Sometimes the best film does not contain the best direction. Some of this year’s films, like The Revenant or Mad Max: Fury Road, contained scenes that feel like they shouldn’t have been able to be filmed. How did Alejandro G. Inarritu and George Miller pull them off? Ridley Scott’s return to form with The Martian gives us reason to celebrate. Ryan Coogler continues to establish himself as a fantastic director with Creed, the Rocky movie that outdid the original. And Tom McCarthy’s Spotlight is, as far as I’m concerned, a perfect film.

There were certainly a few strong potential winners for Best Leading Actor in 2015. Bryan Cranston’s portrayal of screenwriter Dalton Trumbo in Trumbo was inspiring, even if the film he was in wasn’t. Leonardo DiCaprio turns in career-best work in The Revenant, reminding us he’s one of our best actors. Matt Damon needs to be rescued once again in The Martian, but never loses his humanity. Michael B. Jordan atones for Fantastic Four in Creed, a Rocky remake better than Rocky. And Michael Fassbender’s portrayal of Jobs in Steve Jobs felt unbelievably realistic.

Hollywood doesn’t always give women the greatest roles – especially leading ones. But 2015 genuinely had several that are awards-caliber. Brie Larson’s turn in Room was heartbreaking. Cate Blanchett was ethereal in Carol. Charlotte Rampling helped us explore marriage in 45 Years. Rooney Mara, also in Carol, matured before our eyes and helped us explore love. And Saoirse Ronan came to America in Brooklyn only to find herself torn between two loves and two homes.

Supporting performances might not get the spotlight – bad pun, bad pun – like many of the leads, but they’re arguably just as important. And they’re just as worthy of mention, and often just as solid in terms of the actual acting. Idris Elba helped stun us in Beasts of No Nation. Mark Ruffalo and Michael Keaton played persistent journalists in Spotlight. Mark Rylance played a sympathetic prisoner of war in Bridge of Spies. And Sylvester Stallone delivered his best dramatic performance in decades in Creed.

Idris Elba (Beasts of No Nation)

Like the Best Supporting Actor award, there were many supporting actresses that not only deserved nominations, but were every bit the equals of the leads. Alicia Vikander played an A.I. in Ex Machina in one of the most compelling performances of the year. Jennifer Jason Leigh took an incredible amount of abuse in The Hateful Eight, but turned in a creepy and humorous performance in the process. Kate Winslet’s turn as Job’s personal assistant in Steve Jobs was mesmerizing. Kristen Stewart also played an assistant, here accompanying Juliette Binoche in Clouds of Sils Maria. And Rachel McAdams was every bit the equal of Michael Keaton and Mark Ruffalo in Spotlight.

There are never a ton of animated films every year, and often times there are only a handful of good ones – and even fewer that hit wide release. Anomalisa took until mid-January to expand nationwide, but the wait for Charlie Kaufman’s R-rated stop-motion film was well worth it. The Good Dinosaur was a disappointment because of the standard’s we’ve set for Pixar, but it was fine. Inside Out was one of Pixar’s best films. Shaun the Sheep Movie was a very fun film from Aardman. And Studio Ghibli’s “last” film, When Marnie Was There, turned out to be a good one.

When Marnie Was There

The screenplay is an oft-overlooked aspect to filmmaking, even though it’s one of the most important. The Big Short explained to us how the 2008 financial collapse happened. Bridge of Spies added some much-needed humanity to the cold war. Ex Machina delivered a thoughtful movie that’ll become even more relevant in the future. Spotlight effortlessly condemned the Catholic Church. And Steve Jobs managed to let us learn about the entirety of its protagonist’s life despite taking place during three dates in time.

2015 had both incredibly beautiful films, as well as ones whose cinematography not only resulted in gorgeous shots, but also shots that made you wonder the technical aspect to them. How did Emmanuel Lubezki and John Seale shoot some of the scenes in The Revenant and Mad Max: Fury Road, for example? More traditionally, Edward Lachmann made Carol into a pretty and dreamy experience. Robert Richardson’s shots in The Hateful Eight are frameable. And Sicario‘s most underrated aspect is probably how amazing it looks.

2015 was the first year I actively sought out documentaries. I’d see one or two in years before, but there hasn’t been a single year before where I saw as many as I did in 2015. And if you’re like I was, you should start watching them; they’re some of the most rewarding, eye-opening films out there. Amy was a deeply personal tribute to the life of Amy Winehouse. Best of Enemies turned political debates into a funny and thrilling experience. Going Clear: Scientology and the Prison of Belief gave us a deep and critical look into Scientology. Kurt Cobain: Montage of Heck explored the life of the Nirvana vocalist. And The Look of Silence is such an in-depth look into the psyche of war criminals responsible for the deaths of an enormous amount of people.

Going Clear: Scientology and the Prison of Belief

The Look of Silence

Like documentaries, there are a lot of people out there who skip or actively try to avoid any films that fit into the category. If you’re one of those people, stop that! You miss out on quality cinema and you miss out on other cultures! Mustang sees the struggle five Turkish girls have growing up in a very strict, conservative family. Phoenix sees a Nazi concentration camp survivor return to Berlin to find her husband who may have betrayed her. Son of Saul takes you inside one of those concentration camps, focusing on a man who just wants a proper burial for a child he claims as his son. Theeb sees a young boy sneak into the desert and grow rapidly and immeasurably as he faces challenges along the way. And White God is almost Rise of the Planet of the Apes, but with dogs.

With VOD releases and streaming services like Netflix and Amazon producing original content, the theater isn’t the only place to get quality films nowadays. It’s still top dog, for now, but we’ll soon be in a place where it may wind up in a losing position. Beasts of No Nation, which is a Netflix film, focused on a child soldier in Africa. Knock Knock is a campy horror movie with a point. Night Owls is a great dramedy focused on keeping a woman who took a lot of sleeping pills awake for the entire night. Turbo Kid is an amazing throwback to ’80s action movies. And The Voices sees Ryan Reynolds unwittingly becomes a serial killer.

For this category, only films that were released in 50 or fewer theaters, and were released non-theatrically simultaneously, were considered.

Beasts of No Nation

Best Use of a Song in a Film

This is a fun category. It honors some movies that were made memorable thanks to a specific use of a song. Furious Seven‘s “See You Again” was a touching tribute to Paul Walker. The Last Five Years‘ “I Can Do Better Than That” was just my favorite from a film that was more or less ignored in 2015. Magic Mike XXL included the best use of the Backstreet Boys ever with “I Want it That Way.” Paper Towns‘ use of the Pokemon theme song turned that movie into something I may never forget. And The Voices had “Sing a Happy Song” play with its credits, complete with music video, which was just a perfect cap to a great movie.

Magic Mike XXL – “I Want it That Way”

The Voices – “Sing a Happy Song”

2015 was the year where a few actors managed to break out from relative (or complete) obscurity and force their way into our minds and memories. Alicia Vikander was in seemingly everything, but it wasn’t undeserved. After the terrible Seventh Son, she turned in great performances in Ex Machina, The Man from U.N.C.L.E., Testament of Youth, and The Danish Girl. Cara Delevingne might not be a great actor, but her performances in Paper Towns and The Face of an Angel were certainly memorable. Domhnall Gleeson’s acting in Brooklyn, Ex Machina, The Revenant, and Star Wars: The Force Awakens certainly made people take note of him. Oscar Isaac hasn’t exactly been an unknown, but he rose to prominence this year in Ex Machina, Star Wars: The Force Awakens, Mojave, and, I guess, A Most Violent Year, since it didn’t go wide until late January. And Taron Egerton stunned in Kingsman, and then followed it up with solid performances in Testament of Youth and Legend.