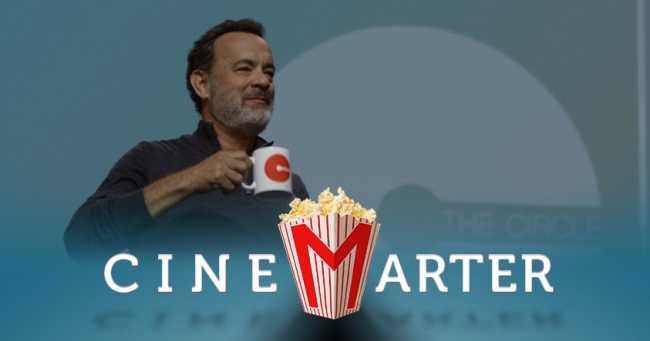 Out of all the bad movies that get released every year – approximately a quarter of the total – only a few will stand out as memorably bad. You know, the either truly horrible movies that you’ll laugh at when making a year-end list or, in the case of The Circle, the types of films that shouldn’t be as bad as they turned out being – and are so fascinatingly terrible that you can’t help but sit back and think about how we got to this point.

On paper, The Circle should work. It has a writer-director who’s never made a bad movie, it has a (mostly) solid cast that features the likes of Tom Hanks, John Boyega, Karen Gillan, Patton Oswalt, and Bill Paxton, and it’s “about” something – in this case, the prevalence of surveillance and the lack of privacy in the social media age in which we currently find ourselves. All of that should result in, at worst, a passable movie. The Circle is so bad that almost none of the individual scenes work, and the movie, on the whole, seems like a mess of terrible ideas, poor execution, and a lack of competence that you couldn’t teach.

The lead is Emma Watson – you’ll note an absence of her name when mentioning the aforementioned strong cast – as Mae, a young woman who, thanks to an in from her best friend, Annie (Gillan), lands herself a job in the customer service department of The Circle, a giant tech company. Think a more advanced Facebook with the workplace atmosphere of Google. It was founded by Eamon (Hanks) and Tom (Oswalt), and at present has over 200 million subscribers in America alone.

So, we follow Mae as she learns more about the company for which she works, sees the technological advances that it creates, and eventually starts to maybe, kind of (but not really), see a problem with 24/7 surveillance and transparency. Data mining, after all, is a real issue that we deal with today, even if The Circle doesn’t have a clue as to why. Yes, this is a movie that doesn’t actually give its evil tech company anything evil to do. You’ll forgive me if I don’t find its comeuppance conclusion cathartic.

The Circle is a film filled with techno-babble but almost nothing else – the result of unbelievably poor execution of a potentially strong idea.

That’s one of The Circle‘s biggest problems. It doesn’t understand the issue at its core and can’t convince the audience to become invested in it. It doesn’t even feel like it can get Mae to care – and she’s the protagonist. Then again, Emma Watson is so bad in the role that this portion of the blame might fall on her. And it’s not just her complete inability to do a passable American accent, either – not a single action she takes or emotion she fakes comes across as authentic. She wouldn’t feel out of place in The Room.

That’s true, too, of the film’s editing, which might actually give us a hint as to how it all went so wrong. There are story threads that are underdeveloped or don’t go anywhere, characters act erratically to the point that their actions make no in-movie sense, and even a couple of conversations and relationship dynamics change from moment to moment. This feels very much like the result of a studio hack job – reshoots that took place almost a year after the initial filming speak to this, too.

Almost every scene feels like torture. The “evil corporation” scenes are so poorly executed that you almost start rooting for The Circle, and the rest of the movie follows Mae’s social and work life, which is excruciatingly dull. There’s a 10-minute segment in which all she does is walk around campus and interact with people – streaming it live on the internet. She’s such a nothing character and she’s so poorly acted that we learn almost nothing about her even during a 10-minute stretch like this.

The Circle is a film filled with techno-babble but almost nothing else – the result of unbelievably poor execution of a potentially strong idea. Where it all went wrong, we may never know – but the film that was released in theaters is so terrible that it took me long after it ended to make sure that it wasn’t something I dreamed. The Circle is a fascinatingly awful movie – one that we’ll remember at the end of the year, but for all the wrong reasons.

Bottom Line: One the biggest disasters of the year, The Circle is relentlessly terrible.

Recommendation: Laugh at it, but wait until it hits home video so you can do so with friends and not feel bad about disrupting the viewing experience of people at the cinema.

And with that, folks, my run at The Escapist has come to its end. It’s been a fun couple of years, and I’d like to thank both the site and all of you for your support over that time. I don’t know where I’ll end up next, but if you want to continue following me, the best place to do that is the Twitter. So long, and thanks for all the fish.