Critical Intel‘s mission is to examine the overlapping space between games and reality in order to enrich the player’s appreciation for both. Often this means pointing out the flaws in otherwise solid games, but it also means celebrating games that put in the extra work to make their characters, setting, or mechanics come alive. To this end, I’ve created a list of titles released in 2012 that – in various ways, large or small – delivered a superior experience through use of real-life settings or novel ways of interacting with reality.

Understand that these aren’t awards and they’re not a “best of” list, since some of these games are not, objectively, the best games of the year. Rather, think of this list as a gentlemanly nod, a fist raised in salute, a quietly passed note that reads: I see what you did there.

Critical Game of the Year: Spec Ops: The Line

No matter how many critics and cultural commentators weigh in, the best argument against a game will always come in the form of another game. Spec Ops is a revolutionary concept – a title that exists solely to criticize the failings and excesses of the genre at large, not through satire, but by exposing how nightmarishly cruel most FPS games seem when viewed from a distance. For years, game journalists have written about the problems inherent in the modern shooter genre: how they dehumanize “foreign” enemies, break the Geneva Convention, and gloss over the risk of collateral damage. Not only did Spec Ops confront all those issues, Captain Walker (and by extension, the player) does those things. He commits war crimes. He executes wounded soldiers. When he finds evidence of his enemies’ humanity, he hides it from his men so they keep their mind on the mission. In a blink-and-you’ll-miss-it moment early in the game, he shoots an unarmed combatant giving medical aid to a fallen man. As atrocity piles on atrocity, we’re forced to confront two of the darkest and gutsiest questions ever posed by a game: How psychologically twisted would a character have to be in order to do these things? And how twisted are we, the players, who are doing it for fun?

Asking tough questions and confronting the problems of our medium head-on was the coup of the year, and a necessary step in moving forward games as an art form. For the first time, a shooter has focused on self-examination rather than entertainment.

What does that mean, exactly? It means that Spec Ops is not a violent game – it is a game about violence. That distinction will be important to remember in the days ahead as violent media once again becomes a scapegoat on Capitol Hill.

I knew exactly where I was the moment I stepped into Haytham Kenway’s riding boots: Theatre Royal, Covent Garden. Onstage was a production of The Beggars Opera. I took my time with that mission, peering into the boxes, examining people’s clothes, and at one point perching above the stage to watch the actors for several minutes. During college, my specialty was 18th century London, and it gave me chills to be part of a world I’d only seen through books and William Hogarth paintings. While not every detail was accurate – the crowd should’ve been drunker, for one, with more prostitutes – the game conveyed a very potent feeling of being present during that time.

You can complain about a lot of design missteps in Assassin’s Creed III (and if you play it, you probably will) but the series consistently nails its sense of place. Town criers shout out the latest news and dogs wander the streets. Below the rolling decks of its ships, pigs and goats squeal in their paddocks. Villagers speak genuine Mohawk, voiced by actors recruited from casting calls at reservations. A lot of the famous figures have dialogue based on primary source texts – yes, even Ben Franklin talking about the virtues of making sweet love to older ladies. Wherever you wander, there’s a sense that a lot of artists, programmers, and researchers chugged late-night Red Bulls to bring out the details.

Where Assassin’s Creed III shines, however, is its insistence on portraying the American revolutionaries as disorganized and fallible; intelligent men cobbling together ad hoc institutions that proved surprisingly durable. Showing the Founding Fathers as naive, licentious, and even morally compromised was a bold and interesting move on Ubisoft’s part, as were the scenes where Shaun Hastings skewers modern politicians that hold the founders as idealistic gods. While the moral relativism can become a little Historiography 101 at times, the demythologizing and murky ethics keep the plot rewarding and thoughtful – even when the game devolves into ludicrous historical tourism.

PS Ubisoft: French Revolution next time, s’il vous plait? I want to save someone from a guillotine.

Creating believable characters in a game is a difficult thing. Game engines often have difficulty with facial expressions and in many cases the dialogue is stiff as a day-old corpse. Look to Skyrim for an example: It’s a lush world populated by wooden dolls.

What makes The Walking Dead so remarkable is that it’s not a game about killing zombies and solving puzzles, it’s a game about relationships. In any situation you live and die by the people around you, and some of the most difficult decisions are the small things like passing out supplies or keeping track of your lies. The hardest part of The Walking Dead isn’t deciding whether to chop off the leg of someone caught in a bear trap – it’s explaining to everyone else why you had to do it.

The game’s comic book-inspired art style is one reason the characters pop so well. All the faces are heavily stylized with large, empathetic eyes and an impressive range of facial expressions. Clementine in particular can show emotions ranging from skepticism to sorrow, and given her excellent facial animation it’s no accident that players feel especially connected to her. This exaggerated, almost caricaturist style also enhances the horror by contrasting the expressive survivors with the stiff, featureless corpses bearing down on them. At its best, The Walking Dead resembles the fever dream of a Pixar animator.

The writing is also top-notch and communicative. Predictability is a killer in dialogue of any type, and games seem to fall prey to it more than other media due to their objective-oriented nature. (When, say, Madrigal the Elf needs deer pelts and you give her deer pelts, it’s a sure bet Madrigal the Elf will be happy with you.) The problem with this is twofold: first, surprise is the currency of good dialogue, and second, real people aren’t always that simple. Characters in The Walking Dead, by contrast, will consistently take a left turn and say things you don’t expect. In Episode 1, for instance, I was sure that getting Larry his heart medication would soften his aggression toward Lee, but in reality, Larry just became more suspicious. In context, Larry’s reasoning was absolutely sound: Despite the fact that Lee had saved his life, Lee was still a convicted murderer that getting close to his daughter, and Larry’s protective instinct went into overdrive. Unexpected yet logical outcomes like this one are the hallmark of great writing, and more than anything else make The Walking Dead‘s characters feel like living, breathing beings rather than set dressing. 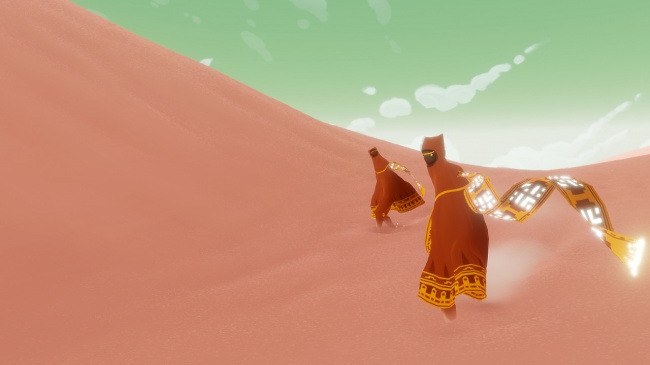 Journey is one of those games that’s difficult to talk about in specifics because players experience the most crucial part of it internally. After playing Journey, some people reflect that they felt a sense of calm, or wonder, or melancholy, or each of these feelings in turn. It may, in a strange way, be the first game that uses the player’s emotions as a game mechanic.

In 2012 we saw a lot of games add an unnecessary multiplayer option as an afterthought. Journey, by contrast, is a game where multiplayer is an integral part of the experience. And that experience is – well, what is it exactly? It changes for each companion you meet along the way. Because Journey matches two random players and gives them no ability to communicate beyond actions and chirps, your relationship with the Journeymen you meet often becomes very deliberate and kind.

My first companion was helpful but hurried. He’d show me secret places and things, then fly off to the next objective faster than I could follow. We developed a good relationship, powering each other up in order to chain jumps up cliff sides. We flew across the desert, singing as we glided through the air. We skated down sand dunes like Olympic skiers on the slalom. Then, after I dropped into an underground grotto, I turned around to find that he wasn’t there. Where’s my friend? I thought, then realized that I must’ve run ahead and left him behind. There I was, underground and in the dark, and suddenly missing my guide. It occurred to me that I’d never see him again. That was the first time Journey gave me a lump in my throat.

I had other companions, some that didn’t jive and others that spent most of their time on pause, but then came a companion I knew as Short Scarf, and suddenly I was the leader. Short Scarf was rash and tended to sprint right past power-ups. He also got pummeled by stone dragons, a lot. Getting Short Scarf up the mountain required a lot of hand-holding and leading by example, but I liked him. He had a certain dogged determination to him, and I admit to taking joy in his pratfalls. On my second playthrough I met my first White Cloak. She sailed around effortlessly, showing me to every collectible in turn, waiting patiently as I struggled behind. When I moved on, she stayed behind like a Bodhisattva to help the next Journeyman.

There’s a strange thing that happens when you play Journey: You feel yourself becoming gentle. Your methods of communication are so purposeful and abstract that only broad gestures come across, and those gestures are by and large kind ones. That’s a new experience in online multiplayer, especially when playing with random matchmaking, and it’s an experience I’d like to see explored more in the future.

Honorable Mentions:
Call of Duty: Black Ops II for including a Middle Eastern undercover agent as part of their special operations team. It’s nice to see a Middle Eastern character on the good guy’s roster for once, but next time let’s not have him shoot American soldiers to “maintain his cover,” yes?

Papo & Yo, for writing the perfect game mechanics to express the horrors of parental abuse. What makes Papo & Yo so heartbreaking isn’t that Monster attacks Quico, it’s that despite Monster’s potential for violence, Quico is still entirely dependent on him. The result is a chilling status quo – Quico needs Monster in order to solve puzzles and progress in the world, yet as long as Quico stays with Monster, he’s exposing himself to harm. In the end, the constant fear of Monster’s next rampage becomes worse than the rampage itself.

Max Payne 3, for obviously doing its homework on Brazil, though the juxtaposition of rich and poor can sometimes become overly-judgmental of a country that’s still industrializing and finding its feet.

Well, that’s 2012 sorted out. If you feel like I’ve missed anything I’d be glad if you let me know – I can’t play everything, and I’m always looking for interesting new gameplay.

Thanks for reading, and Happy New Year.