Whenever a games journalist needs an insightful – or incitable, depending on your perspective – technology pundit, the first guy she calls is Michael Pachter. 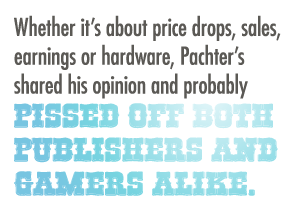 If you don’t know Pachter by name, you’ve certainly heard about his work. Gaming websites across the internet constantly cite his forthright predictions on the videogame industry. Whether it’s about console price drops, software sales, company earnings or even new hardware (like the Wii HD, for example), you can bet Pachter’s shared his opinion about it on some gaming blog, and he’s probably pissed off both publishers and gamers alike.

In addition to the videogame publishers, Pachter also covers Netflix, GameStop, Blockbuster, RadioShack, Coinstar, Dreamworks, WWE and movie exhibitors like IMAX, Regal, Cinemart and Carmike. However, he wasn’t always analyzing and predicting the entertainment industry’s next move. He said it was a “total fluke” that he covers videogames. Armed with four degrees – an undergraduate degree in political science, a law degree, a master of law and an MBA – he held jobs as a tax lawyer, an investment banker and a “mergers and acquisitions guy” before he was hired at Wedbush to head up the research department. But then he found that doing the actual research was more interesting than running the department, so when the person covering the games beat left the company, Pachter stepped in, and he’s been doing it for the past 11 years.

A typical day for Pachter begins at 4:30 in the morning. He stays for 12 hours (except for today, because of our interview and a long week of earnings calls), and eats lunch at his desk. He tracks the industry, looks at data and reads news websites and blogs. He makes an average of 15-18 phone calls a day – ranging from 10 minutes to an hour – to speak with investors as well as public and private companies.

“I talked to Activision today, and I talked to Microsoft a couple of days ago,” Pachter said. “My work essentially consists of understanding what companies do and then writing about it. And then typically after I’ve written about it, I’ll speak with shareholders and help them to understand it.”

Once he gets home, the work doesn’t stop. After dinner with the family, Pachter usually checks his e-mail and the internet for news every night before bed to make sure he doesn’t miss anything (he gets about six hours of sleep a night). He also writes notes to investors during the weekend for a few hours, bringing his average work week to 70 hours. When he’s not evaluating the industry, Pachter also somehow makes time to actually play some games. He typically plays 4-10 hours a week, and enjoys all genres – from casual titles like Cut the Rope on the iPad to every Call of Duty game and in-depth RPGs like Mass Effect, Dragon Age, Fallout and Diablo.

But that doesn’t include the times when he travels. To visit clients, Pachter’s away from home about 60 nights a year, mostly for domestic trips, though he does head to Europe on occasion. In fact, later this month he’s got a business trip that takes him to six cities (London, Paris, Geneva, Helsinki, Oslo, and then back to London) in seven days in order to meet with 3-4 clients a day.

And Pachter gets paid well for a reason. He’s become the most well-known analyst in the games industry because he does his homework, and he’s especially outspoken about his predictions and analyses. Besides hard data, which his company purchases from the market research company NPD Group, Pachter looks at everything from pre-order sales to game reviews in order to cull his information. He also said that he reads “all” of the gaming websites and blogs. Every bit of news, whether it’s about a game being buggy or the Infinity Ward head honchos leaving Activision, can be valuable information he needs to make an informed analysis for investors. And, like for most videogame consumers, the Metacritic score of a game affects what he thinks. 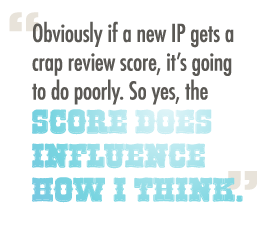 “If I have one game that’s a million too high in my estimate and another game that’s a million too low, and they add up to zero, I probably did a perfect job with earnings,” he explained. “That’s all that really matters. I like to make a whole bunch of mistakes because the more guesses I make, the more likely they’re all going add up to zero. I’ll get pretty close to how a company is going to earn because the odds are I’m not going to always be high or always be low.”

His track record proves his methods mostly work. In the last decade, Pachter claims he’d been ranked number one in earnings accuracy three times among all tech analysts. So how does he do it? “My method is, I say what I think, and I spend all of my time looking for reasons why I’m wrong,” he said. “And I think many of my competitors say what they think and they spend all their time looking for reasons why they’re right. If you say something based on thoughtful analysis, you’ve already looked at all the things that would make you right. So look for things that would make you wrong because you’ll get a better result. That’s how I do it.”

That’s not to say that Pachter hasn’t made bad calls over the years. In fact, he described 2009 as a “bad year,” where he had quite a few estimates that were just plain wrong. “Remember we all thought that The Beatles: Rock Band would be huge?“

And 2009 wasn’t the first time Pachter’s made missteps. He said he’s been kept humble in the past by liking companies who have since gone bankrupt, like Acclaim, 3DO, Atari, Midway, Interplay and Blockbuster, to name a few.

“There were times when I had buy recommendations on them, for sure,” he confessed. “Probably not the day they went bankrupt. I probably corrected before they went out of business, but I was completely wrong on those. I’m sure there are more. So yeah, I get it wrong all the time. Live and learn from the mistakes, and try to not make them again.”

Although Pachter cited his boldness as a strength, it’s also gotten him in hot water too, especially when it comes to certain videogame publishers. “Because I’m fearless, that means I’m not as cautious as I probably should be, and I say things that upset people. I’ll say things like, ‘The PSP Go is a rip-off,’ and it hurts Sony’s feelings. I didn’t mean to hurt their feelings, but it was pretty expensive!” 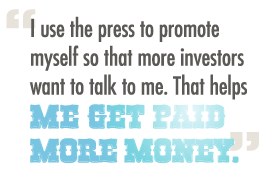 “And I invite anybody who wants to influence what I say to reach out and call me,” he continued. “If they don’t like what I say, but they don’t call me, then they should just be quiet and suck it up. I’ve had companies call me and yell at me after the fact. Well, if you don’t like it, then call me and tell me why I’m wrong before I say it! I’m never going to apologize. If they say I don’t have all the facts, then I ask them to give me the facts next time. Then they won’t have that problem.”

But publishers’ feelings be damned. The one thing that makes Pachter really proud is the fact that most folks in the gaming industry can’t name another analyst in the business. “You might be able to name one, but there are 35 of them and people can’t name five of them,” he said. “Why is that? I’m easy to get to, and I’m quotable. People come back to me because I’m articulate. My answers make sense, whether they’re right or not. I don’t know why my competitors [aren’t like that].”

“Investors should [listen to me] because I’m really good, but look, I use the press,” he admitted when I asked why we should listen to him. “It’s a symbiotic relationship. I try to give you guys what you need, and I use the press to promote myself so that more investors want to talk to me. That helps me get paid more money.”

Pachter might be the go-to guy for journalists because of his candor and his accessibility, but the gaming forums and comments sections aren’t always so kind to him. No matter what they say, though, he takes it all with a grain of salt.

“I’ve had a couple of guys actually send me e-mails saying I should kill myself because I’ve said things like, ‘Call of Duty should charge a subscription,’” he said, laughing. “But I don’t write for the fanboys who say that I’m an idiot and I don’t understand Nintendo. I write for investors because my client base cares if Nintendo is launching a new console … I try to be as honest, thoughtful and logical as I can. I don’t say stuff to get a reaction. I say it because I think it’s going to happen or it’s right.”

But what does the future hold for Pachter? The 54 year-old expects to be doing this for another 5-10 years, at least. “I lost so much money in the market crash, I can’t afford to retire,” he said. “I need to work, but I don’t really mind. I like working. My kids aren’t even 11 yet, so I’m hoping I live long enough to have grandkids. That’s my overall goal in life. That’d be fun.”

Tracey John is a freelance writer living in New York City. When she’s not writing about games, comics and toys, she’s usually baking cupcakes or watching Star Trek re-runs. Find out more about her at her website, www.traceyjohn.com.

The Devil Went Down to Nippon

You Can’t Judge a Game By Its Trailer