I do love a nice inflammatory topic that inspires lots of reasonable, intelligent debate, which is what drives me to begin this column with the following question: is Mario dead? And with that said, I think I’m going to skip reading the comments on this one.

His face is still everywhere, true enough. It’s still easy to find lunchboxes with him on the front and he’s still a name and an image that remains known even to people who don’t know anything else about videogames, like what Superman is to comic books, or what Mickey Mouse is to the entirety of American culture. But when was the last time Mickey Mouse actually did anything? Anything besides being plastered across toys and clothing by the massive corporation to which he is enslaved? Epic Mickey, granted, but it’s been a long fucking time since he starred in a cartoon short or a film, which was where he built his appeal.

Mario and Mickey Mouse both inhabit this strange state of existence where they are no longer “characters” but are “intellectual property”. The difference being that a “character” has personality and inhabits actual stories in which they undergo arcs, but “intellectual property” merely exists, frozen in time, to be worshiped and stamped on T-shirts. Frankly, I couldn’t imagine a more tortuous existence. It’d be like if a bricklayer was made King. And they sat him on a throne and everyone kowtowed before him and took pictures, and the bricklayer wants to go and lay some bricks because that’s kind of what he likes doing. But no-one will let him because they want to admire his lovely hands some more. That’s no kind of life. It’s more like living death. Mario is a cultural zombie.

There are still games with Mario in them, yes. Token ones that do little more than remind you of his existence, New Super Mario Bros Whatever, current-gen retreads of concepts that were explored pretty much to their full around Mario 3. The last time any Mario game was cutting-edge and relevant and conceptually challenging was Super Mario Galaxy back on the Wii, and as I said at the time, there aren’t a whole lot of places you can go once you’ve blown the ‘going into space’ load, that’s what the Jason films discovered. So now, he’s just kind of there. He came back from space and now things will never be the same again. In that respect Mario is basically The Fury from Metal Gear Solid 3. Mario has slightly demented arsonist leanings whenever he’s got a fireflower on, doesn’t he.

The first sign that a character is kinda done is when his owners start joining in with the people who are taking the piss out of them. And that’s what was going on with the Paper Mario wing of the Nintendo castle, as well as the Mario & Luigi RPGs and, going all the way back, Super Mario RPG on the SNES. Games where the fixed “canon” of the standard Mario game – Bowser bad, Bowser kidnap princess, you rescue princess – is toyed with by introducing new characters and in-depth dialogue that hangs the metaphorical lampshade on the inherent absurdity of the original concept. So you have situations where Bowser becomes a figure of fun or even an ally, totally undermining the core principles. Games like Mario Kart were arguably already undermining the canon by showing that the hero, the villain and the distressed damsel were all chummy enough to spend go-karting holidays together. 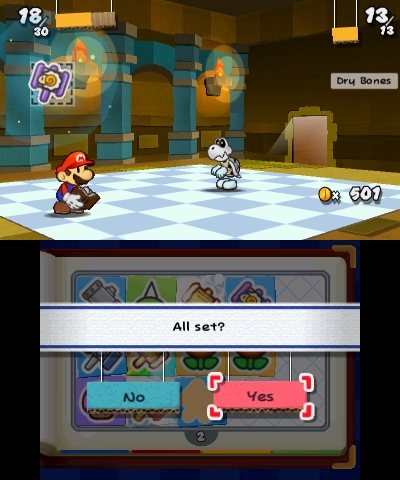 But after self-parody, the second stage in the death of an icon is when the parodies stop being funny and the property owners start getting too protective. Which I suspect may have happened with Paper Mario Sticker Star. Maybe the owners of the character are getting paranoid that the star is somewhat on the wane, so they go into lockdown. The character will remain preserved forever in the state they are currently in, the prized possession of a corporate hive mind no longer concerned about emotion or growth but about ensuring that nothing associated with them is portrayed in anything that could be interpreted as a negative light. The alternative is unthinkable: they might turn into nothing but the thin shell of parody that used to surround an actual person. They become William Shatner.

So the stagnation begins. Mario is now an inmate at Spandau prison, allowed out of his box only under the strictest protective conditions for a brief walk around the exercise yard. No kind of life, this. No more game changers for him. Just an eternity on children’s pajamas and ironic collectibles.

Maybe it goes further than that. Maybe we are living in a post-mascot age. For some reason, my thoughts lately keep turning to Playstation All-Stars Battle Royale. What its presence actually represents rather than the qualities of the actual game (which I still can’t be arsed to play). Smash Bros Brawl, its clone father, was a property based entirely around nostalgia. As in, that was the only reason for its existence and the carbon from which its entire chemical makeup was composed. It was about seeing all your favorite faces from your childhood interacting, which is always fun. It’s like finding out that one celebrity or artist you really like is best friends with another one you really like.

But can PASBR claim the same thing? One could certainly claim to like Nathan Drake or Cole McGrath or the games from which they originate, but they’re not exactly icons, they’re just two white blokes in jeans. They can’t be said to have nostalgia working for them because they’ve only been out a few years. An exercise in celebrating them has a rather disagreeable taint of cynical marketing about it. But maybe that’s the age we live in, now. Maybe that’s what Sony’s trying to tell us. We don’t need to work at building a relationship between you and our characters anymore. We’re just going to dictate what you like. Whether or not a character proved popular is no longer relevant, we simply act under the assumption that they are. I mean, Fat Princess? Seriously?

And then there’s the matter of including Dante from Devil May Cry as a character, only it’s the new Dante from the DmC: Devil May Cry reboot. The one that isn’t even fucking out yet. How does it make sense to put a character who doesn’t yet formally exist in a popularity contest? What would you even call that? The assumption of success? Pre-nostalgia? Whatever the case, perhaps this world is just getting too frightening for a fat little cartoon plumber.